Athenahealth: The Other Side Of The Cloud - InformationWeek

The Watertown, Mass., firm built its business on web-based software, but its emphasis has always been on helping doctors with practice management -- particularly helping them get paid. It charges based on what it accomplishes for its customers (such as a percentage of billings collected), rather than for the software itself. The cloud services the company offers are backed up by an array of human-powered services, like people to follow up on claims that have been denied and clerical workers to process paperwork that comes in by fax, rather than electronically. Next year, when many of its clients will be pursuing Meaningful Use Stage 2 certification, which includes goals for getting patients to interact with their medical records online, Athenahealth will offer services like followup calls urging patients to sign up for a provider's patient portal, making it more likely that goal will be achieved.

At a time when doctors are being confronted with "pay for performance" deals from insurers, Athenahealth has aligned its fee structures so it gets paid based on what it achieves for its clients, whether that's getting claims paid or streamlining the submission of pharmacy orders and the receipt of lab results.

The emphasis on backoffice services does not mean the software isn't important. At this writing, the company home page is boasting loudly about AthenaClinicals winning a No. 1 ranking from KLAS for usability, efficiency, and effectiveness -- an impressive recognition given that it's based on a survey of healthcare providers, who are often the biggest critics of electronic health records software.

[Is there another reason docs are skeptical about EHRs? See Health IT Could Reduce Demand For Physicians.]

"There's still a user experience challenge, but we've been ranked the most usable EHR," Athenahealth CEO Jonathan Bush said. With its emphasis on providing services, "we're able to cheat a little bit -- because the simplest user experience is one where someone else does the work for you."

Meanwhile, the actual software usability "is something we're investing in disproportionately to the rest of the business" by building out a disciplined user experience team, said Jeremy Delinsky, chief technology officer. Buyers sometimes ask for features that aren't good for users. Developers want to add popup alerts, and the user experience team is empowered to say "no." Director of usability Lauren Zack tells of accompanying Bush on "undercover boss"-style visits to clients' offices to see what is or isn't working for them and check out the Post-It notes pasted to monitors by users trying to work around functionality gaps in the software.

Clients will invest in helping Athena understand how to improve its products "because we're so embedded -- our success is their success and vice versa," Zack said. 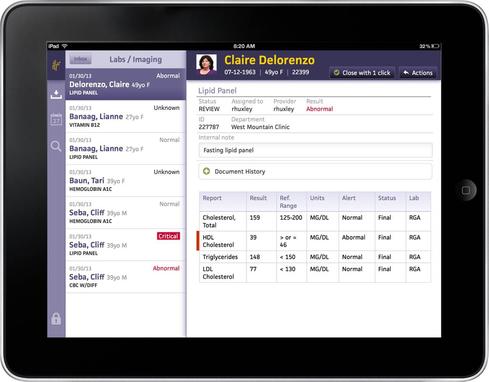 Next year, Athenahealth plans to unveil the results of its AthenaX project, a redesign of the entire software suite, which among other things will apply responsive design principles to make the same software adapt for display on either PCs or mobile devices. Delinsky said he considers the current AthenaClinicals iPad app a stopgap, even though it's been popular with doctors as an "inbox buster" for dealing with pending items such as incoming lab results. But ultimately, he doesn't want there to be a distinction between the mobile software and the Web software, he said. "We want it to render beautifully on whatever device you are on."

Epocrates, the creator of a popular series of medical reference and point-of-care apps that Athenahealth acquired earlier this year, will be the exception to this policy because it built its reputation on native apps.

Like many other healthcare technology companies, Athenahealth wants doctors and practice managers to know that it can help them collect the available government incentives for Meaningful Use. But if that's all they want to do, they might tend to look past Athenahealth and take other options that are less expensive -- or even free, like Practice Fusion, which supports its EHR cloud service on ads and fees from pharmacies and other players in the healthcare market who want to be as easy as possible for doctors to connect with.

For the most part, Athenahealth doesn't compete in the hospital market where more traditional enterprise software players like Epic and Cerner dominate. Instead, it focuses on supporting physician practices and practice groups for ambulatory ("walk in") rather than inpatient services. However, Athenahealth is increasingly winning business from large physician networks affiliated with hospitals. A prime example: a recent deal with Ascension Health Alliance.

Comparing Athenahealth with other EHR software vendors can be misleading because the company is first and foremost a practice management company, putting most of its energy into reverse engineering the reasons why insurers deny claims so they can be built into a software rules engine that avoids those problems. "The clinical footprint, while very highly regarded and very highly ranked, is a small subset of the company," said Eric Coldwell, a managing director of healthcare equity research at Robert W. Baird & Co. who covers Athenahealth.

On the other hand, one reason he is "a huge fan" of the Athenahealth business model is that it has multiple paths to winning clients. Usually, they start with AthenaCollector to help them get paid, but they might also start with AthenaClinicals and adopt the revenue cycle management product later. Either way, there's a natural path to AthenaCoordinator (for handling referrals), AthenaCommunicator (patient engagement), and AthenaClarity (analytics). Meanwhile, Epocrates is so widely used and popular that it opens up a whole other avenue for Athenahealth to introduce itself to physicians.

A closer competitor, CareCloud, offers a similar suite of clinical and practice management software products and a parallel family of backoffice services, except that they're not necessarily joined at the hip. CareCloud's leaders say the fact that only about two thirds of its customers sign up for the software subscription alone shows the market's demand for cloud software independent of those sorts of services.

"All the competition does make Athena have to be that much savvier in marketing its value proposition," Coldwell said. "On the face of it, the service is not cheap. They're saying, pay us $20,000 or $30,000 a year to adopt all of our solutions, and you can take out all of your infrastructure for backoffice support. If you look at the total economics, the ROI is undeniable."

Does the way Athenahealth links cloud software to back office services make sense to you?
Reply  |  Post Message  |  Messages List  |  Start a Board
InformationWeek Is Getting an Upgrade!