Creative CIOs are getting not only savings but also added flexibility and specialized skills from their IT outsourcers. Just don't expect magic.
Paul McDougall
Editor At Large, InformationWeek
August 22, 2012
Where In The World

Outsourcing isn't synonymous with offshoring; survey respondents say 60% of the outsourcing work done for their companies is done in the U.S. Says survey taker D.G. Brown, CIO at electronics manufacturer Sparton: "We use an onshore company after having major issues with an offshore company. The offshore company did not test, provided substandard product, and exhibited major communications gaffes."

Another downside to pure outsourcing, Ditmore says, is that IT organizations lose their institutional knowledge base. "There's no pipeline of talent coming up," he says. "You lose the context of how work is being done."

The most common reason IT pros give for not outsourcing? Forty-four percent said they have no need. After that, it's cost (26%), followed by quality of work (21%), lack of industry knowledge (16%), and the difficulty of managing these relationships (11%). The main reason Mott is reversing GM's historical reliance on IT outsourcing is to execute projects faster and cultivate auto technology expertise internally.

With all the pros and cons, it's no wonder that IT outsourcing is, and will remain, controversial--even if it has become more than just a cost-cutting move. Ditmore offers advice for fellow IT execs: "Everything in moderation. When you can get some advantages, absolutely. But to go fully into it and assume it's just going to work is naive." 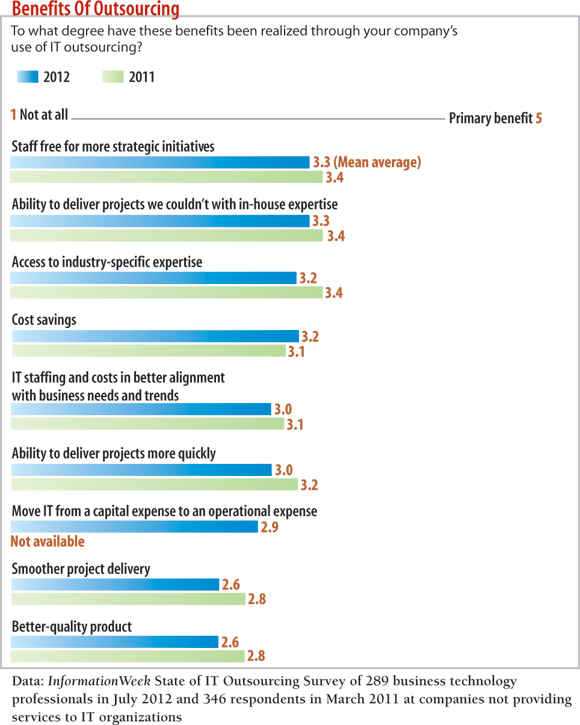