50%
Tweet
The Indian telecom outsourcer will acquire a 51% stake in Satyam, but this stands to be a difficult turnaround effort.

Indian telecom outsourcer Tech Mahindra has agreed to acquire a 51% stake in scandal-plagued Satyam for $422 million, but the deal marks only the beginning of what could be a long and difficult turnaround effort.

Tech Mahindra has to put $351 million into escrow by April 21 to secure the pact. As a joint venture between Indian manufacturing giant Mahindra & Mahindra and British Telecom, Tech Mahindra shouldn't have trouble raising the cash.

India's Company Law Board last week approved the sale, though one unsuccessful bidder, SpiceCorp, filed a complaint that the auction was unfair, saying a board member common to Satyam and Mahindra & Mahindra may have influenced it.

Closing the deal is just the start of the challenges facing Tech Mahindra as it seeks to remove the stench of a multibillion-dollar accounting scandal that saw Satyam's founder and chairman, along with several senior executives, arrested and jailed for fraud.

Tech Mahindra's biggest problem: Its status as a relative unknown outside the telecom industry could make it difficult to convince Satyam customers from other other fields, such as manufacturing, health care, and financial services, to stay on.

"To win and retain large customers is going to be difficult for them," says Atul Vashistha, CEO of outsourcing consultancy NeoIT and former head of international operations for Cardinal Health. "Satyam's Global 2000 customer base chose the company because they believed it was equally competitive with Wipro, Infosys, or TCS," says Vashistha. U.S. outsourcers such as IBM and HP-EDS, as well as Bermuda-based Accenture, also stand to benefit if customers flee. "Tech Mahindra is not known as an IT shop but as part of a telecom conglomerate," Vashistha says.

The company's CEO, Vineet Nayyar, does have experience beyond the telecom industry, having held executive posts at broad-based IT outsourcer HCL Technologies. He'll need to play that up in front of blue-chip Satyam clients such as General Electric, Fujitsu, and Airbus. "He's a solid leader with a big company background," Vashistha says. 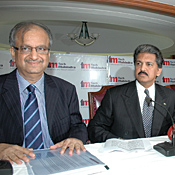 Nayyar (center) must keep Satyam’s star customers.
Tech Mahindra's acquisition of Satyam could provide some of Satyam's customers with the out they've been looking for. "Outsourcing contracts regularly include a change-of-control condition, which, if triggered, results in an option for the customer to terminate," says William Bierce, an attorney who specializes in IT services deals. "The irony is that this deal to save the company triggers that ... clause."

Last month, the United Nations said it planned to terminate its Satyam contracts and bar it from bidding on future work. Property and casualty insurer Selective Insurance is looking into alternatives. It has outsourced about a quarter of its IT staffing to Satyam. Gadget maker SanDisk also has said it's considering pulling work from Satyam.

Integration issues also loom. With a head count of about 50,000, Satyam is literally twice the size of its 25,000-employee acquirer. Tech Mahindra CEO Nayyar will need to convince top Satyam lieutenants to remain on board, at least in the short term to help make the transition work.

Economic Squeeze
Finally, not least among Tech Mahindra's challenges is the economy. The company is committing more than $400 million to the deal at a time when the outsourcing industry is facing brutal conditions. Customers are hammering outsourcers for discounts of up to 20% on existing contracts. Underlining the point, Infosys' stock price declined 9% in one day last week after it disclosed a profit forecast that fell short of analysts' expectations.

Tech Mahindra also will have to deal with dozens of Satyam's investor lawsuits and could be liable for millions of dollars in payouts. Last week, a judge agreed to consolidate several of those suits into a single case that will be heard in U.S. federal court in lower Manhattan.

Indian authorities earlier this month formally charged Satyam founder and former chairman Ramalinga Raju and several alleged accomplices with crimes including criminal conspiracy, impersonation, forgery, falsification of records, and evidence tampering. Raju has admitted falsifying Satyam's cash position by as much as $1 billion while overstating quarterly earnings and revenue by as much as 28%. Satyam also may have faked employee numbers and other data.

We welcome your comments on this topic on our social media channels, or [contact us directly] with questions about the site.
Comment  |
Email This  |
Print  |
RSS
More Insights
Webcasts
5 Steps to Integrate SAST into the DevSecOps Pipeline
Linking, Orchestrating, and Managing Your Enterprise Security Systems
More Webcasts
White Papers
Simplify Your App Security
[IT Trend Report] The Future of Cloud
More White Papers
Reports
Can You Spare 10-12 Mins to Help Us Out with a Survey on Tech Trends?
Got 7 Minutes? Dark Reading Needs Your Help With Our Survey on Incident Response
More Reports