Windows Phone 8.1 developer preview is now available to practically anyone who is interested in it. Microsoft added a wide range of features to the mobile operating system, including Cortana, what Microsoft calls a personal assistant. Cortana is being released under the protective beta banner, but that doesn't mean Cortana isn't ready for some serious testing.

Microsoft representative Greg Sullivan said that Cortana evolved from its Halo video game. In fact, Microsoft brought back the actor who voiced the Halo assistant to add more language and responses to Cortana. The company's vision for Cortana is that will be as helpful to Windows Phone owners as a real-life assistant would be. The company went so far as to interview actual assistants and ask them to reveal the secrets that make for great assistants. For starters, real assistants take notes.

Cortana takes notes, too. When it's first launched, Cortana asks a handful of questions to give it a slightly better idea about the owner's general interests and preferences. Cortana adds to its notebook over time, which represents how deeply Cortana learns and can apply that learning to actual task management. 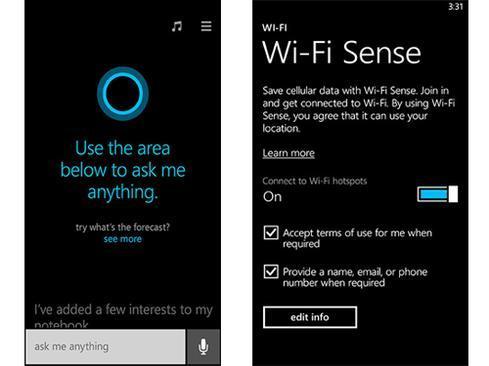 Part of the learning process is adding notes of your own. For example, asking Cortana to "Call Dad's cell" only works if there's a contact identified as Dad in the People Hub. Users can add notes to their contacts to make them easier for Cortana to find and interact with. Cortana will automatically generate an inner circle of contacts -- those with whom Cortana notices you interact with most frequently. These are initially culled from people with the same last name as yours and your messaging/phone records. Once you've set an inner circle, Cortana is better at managing Quiet Hours, which are times when the owner is not to be disturbed.

All these functions and features are held back by one key issue: voice recognition accuracy. Cortana is not as adept at translating speech to text as Apple's Siri or Google's Google Now -- at least, not yet. Microsoft said that Cortana needs to develop a history of utterances and interactions in order to learn and grow. Until now, Cortana was feeding only on 3,000 internal Microsoft employees dogfooding the platform. Microsoft expects Cortana's response rates to improve dramatically once many more people, including developers, start using Windows Phone 8.1 and Cortana.

After testing Cortana for a week, I'd rate its performance as acceptable, though not quite up to par with Siri and Google Now. Of course, Siri had serious problems at launch and didn't graduate from beta status for two years. Google Now doesn't have the personality that either Siri or Cortana offers, but its voice-translation powers are the best I've experienced.

Cortana certainly shows lots of potential. With any luck, it will improve before Windows Phone 8.1 launches this year.

Eric is a freelance writer for InformationWeek specializing in mobile technologies. View Full Bio
We welcome your comments on this topic on our social media channels, or [contact us directly] with questions about the site.
Comment  |
Email This  |
Print  |
RSS
More Insights
Webcasts
Making XDR Work in Your Enterprise - May 12
How the Rapid Shift to Remote Work Impacted IT Complexity and Post-Pandemic Security Priorities
More Webcasts
White Papers
Improve your business with a Virtual CISO
Cisco Secure Email
More White Papers
Reports
2021 Application Security Statistics Report Vol.1
The State of Endpoint Security
More Reports

"Cortana" makes me nostalgic for the naming simplicity of Microsoft Bob. I wish these digital assistants could call people who aren't listed among my contacts. That would be worth having.
Reply  |  Post Message  |  Messages List  |  Start a Board
InformationWeek Is Getting an Upgrade!