Apple wants Samsung to pony up $40 per smartphone for patents. Will the strategy backfire?

Apple wants blood from Samsung. The iPhone maker believes devices such as the Galaxy S II and S III are copycat products whose success is attributable to Apple's intellectual property. Apple is seeking $2 billion in damages from the Korean firm and hopes this second trial fully exposes what it views as Samsung's theft. Meanwhile, Samsung is innovating and moving on with new and different product categories while Apple offers only iterative updates to its devices.

Like the first major trial between Apple and Samsung, the second trial takes place in San Jose, Calif. US District Judge Lucy Koh is once again presiding over the trial, which will be heard and decided by ten jurors who've not yet been selected. Apple and Samsung have been filing motions with the court furiously in the lead-up to the trial, and Koh has been stern with both firms about the rules of the courtroom and what they may and may not present to the jury. Apple sued Samsung over five patents, and Samsung countersued over two. Here's a quick rundown on the patents. 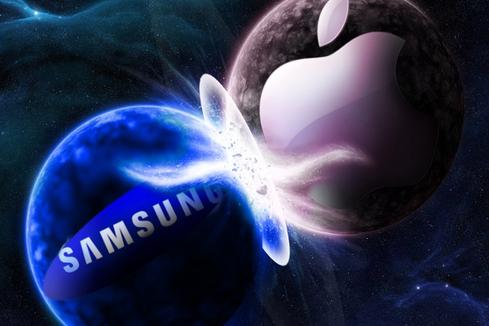 The Apple patents in question cover system and method for performing action on a structure in computer-generated data; universal interface for retrieval of information in a computer system; synchronous data synchronization among devices; unlocking a device by performing gestures on an unlock image; and method, system, and graphical user interface for providing word recommendations. These are all utility patents, not design-related patents. The first major trial between Apple and Samsung in 2012 pertained to the design patents. Apple says ten Samsung devices violate these patents, including the Galaxy Admire; Galaxy Nexus; Galaxy Note and Note 2; Galaxy S II, S II Epic 4G Touch, and S II Skyrocket; Galaxy S3; Stratosphere; and the Galaxy Tab 2 10.1.

[Does Apple have some new innovation in the works? Read 5 Apple Patents Hint At Surprises.]

The Samsung patents in question cover camera and folder organization functionality, and video transmission functionality. It's important to note that Samsung's patents were acquired -- not developed -- by Samsung. In fact, Samsung didn't acquire the first of these patents until after Apple filed its first lawsuit against Samsung, in 2011. Samsung says eight Apple devices violate these patents, including the iPhone 4, 4S, and 5; the iPad 2, 3 and 4; the iPad mini; and the fourth- and fifth-generation iPod Touch.

This trial is entirely separate from the one in which a jury awarded Apple $1 billion in damages (of which about $930 million stuck). Combined, Apple might eventually see a payday of about $3 billion. That's a lot of money, but Apple is taking a hit in the reputation department. Some are beginning to see it is a litigious dollar-chaser rather than an innovator of fine mobile products. There's no question that Apple still makes a lot of money from the iPhone and iPad, especially when you consider the impact of iTunes and the App Store, but it's easy to wonder what Apple could create if it spent less time litigating and more time on product development.

Since Apple filed the first lawsuit in April 2011, the basic designs of the iPhone and iPad haven't changed much. Sure, Apple increased the iPhone's display from 3.5 inches to 4 inches, improved the camera and processor, and added a fingerprint sensor, but the company hasn't delivered a serious "Wow!" since the debut of the iPad back in 2010. During this same time period, Samsung introduced the Galaxy S III, S4, and S5, each with its own improvements. It launched the Note, Note 2, and Note 3 phablets, creating and capitalizing on a brand-new device category. The company also introduced four different wearables, and its tablet selection ranges from dirt cheap to top of the line. Samsung has diversified its product mix and is selling devices in big numbers. After years of rumors, larger iPhones and the iWatch still haven't panned out, leaving many to wonder if they'll ever show up.

Apple's demand that Samsung pay it $40 per offending device is ludicrous on its face. The company might do better to license its broad patent portfolio rather than litigate it. Unless Apple chooses that path, it will continue to battle Samsung for years to come -- both in the courtroom and on retail shelves around the world.

It's not an easy issue, particuarly given the complexity of the patents involved. On the one hand, companies shouldn't be able to freely copy Apple. On the other hand, Apple's closed nature begs to be copied because the company insists on owning everything -- can you imagine how much an iPhone would be if Apple were the only company allowed to use the touchscreen model it pioneered? Frankly, it's hard to side with either company. Our patent system is a mess. But the alternative, rampant copying, doesn't work well -- see the app market. Many of these rules which made sense in the industrial age no longer work in the information age, when designs can be knocked off in days...but lawmakers seem unwilling to try bold fixes. So we're stuck with a system that's bad for everyone.
Reply  |  Post Message  |  Messages List  |  Start a Board
InformationWeek Is Getting an Upgrade!