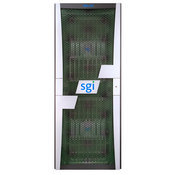 SGI Altix UV 1000 Server
SGI has introduced an Altix UV server that the company says runs Microsoft's Windows Server 2008 R2 on a maximum of 256 processor cores and 2 terabytes of memory, making it possible to use the software for more demanding workloads.

The new server is based on Intel Xeon processors and is Microsoft-certified for Windows Server and Microsoft SQL Server database, with Business Intelligence Development Studiodata warehousing and data mining tools. The latter is Microsoft Visual Studio 2008 with additional project types specific to SQL Server business intelligence.

SGI, which launched the server Friday, is targeting the high-performance x86 computer at business intelligence applications and other tasks that require major horsepower for handling large quantities of data. The system contains many more cores than the largest x86 servers from IBM or Hewlett-Packard, and it pushes the platform further into markets dominated by RISC/mainframe systems.

"By combining the power of the Intel Xeon processor with SGI's high-performance Altix UV system, large scale-up x86 computing is now a reality for IT looking for alternatives from the costly and proprietary RISC/mainframe architectures," Pauline Nist, general manager of mission critical computer at Intel, said in a joint statement with SGI.

SGI plans to boost the performance of the Altix UV 1000 further. "We continue our joint development work with Microsoft and Intel, and look forward to scaling these mission critical technologies even further," SGI chief executive Mark J. Barrenechea says.

SGI's beefier server comes at a time when the popularity of commodity x86 servers running processors from Intel or Advanced Micro Devices is growing stronger. Global factory revenue from such systems in the fourth quarter of last year rose more than 21% year over year to $9 billion, the highest quarterly revenue ever reported by IDC for x86 servers. IDC attributed the increase to the introduction of higher performing processors with multiple cores, which has made it possible for organizations to run more power-hungry applications on the relatively inexpensive commodity systems.

Strong sales of x86 servers does not mean RISC and mainframe systems are heading to oblivion. IBM in the quarter topped the server market in revenue, as sales of its System z mainframe rose 29% year over year, according to IDC.

IBM's success is due in part to its coupling of the System z with the relatively new zEnterprise BladeCenter Extension (zBX). The technology makes it possible to run applications on IBM's x86 System x blade servers and integrate them with a database application running on the mainframe.