In this BYTE article from May 1977 Stephen Wozniak describes the hardware and system software in the then brand new Apple II. Circuit diagrams and BASIC listing are included.
InformationWeek Staff
Contributor
May 14, 2012

BASIC language statements are stored in user memory as they are accepted and variables are allocated space the first time they are encountered during immediate or programmed execution . When a program terminates, whether by completion, interruption or error conditions, all variables are preserved. Programs may be interrupted in execution by typing an ASCII control C; it is then possible to examine and modify a few variables in immediate mode, then continue execution at the point of interruption by typing the CONtinue command. BASIC provides the line number of the statement as the point of interruption when this sequence is used. The entire variable space is cleared to zero when BASIC is initialized by the CLR command, and prior to executing the RUN command. (It is possible to carry variables from one program to another, but to initiate the second program a GOTO command must be used instead of RUN in order to override the automatic clear at the beginning of execution of a new program.)

The interpreter consists of a standard expression evaluator and a symbol table routine for allocating variable storage similar to those described by Prof Maurer in his 2 part series 'in the February and March 1976 issues of BYTE. As statements are scanned, nouns and verbs are encountered . Variable names result in calls to the symbol table routine which pushes address and length information on the noun stack (operand stack). Constants are pushed directly onto this stack. Verbs are pushed onto the verb stack (operator stack) after popping and executing any verbs of greater priority. A verb is executed by calling its associated subroutine. Tables define priorities and routine entry addresses for all verbs. Keywords such as THEN or STEP, and delimiters such as commas and parentheses, are dealt with just as though they were arithmetic operators. Verb routines obtain their arguments from the noun stack. Because verbs such as parentheses tend sometimes to be of low, and other times of high priority, each verb is actually ass igned two priorities (left hand-right hand). One represents its tendency to force execution of other verbs, the second its tendency to be executed.

The entry into BASIC, as well as other user oriented features of the Apple-II, is provided by an interactive keyboard monitor which serves as an aid to writing and debugging machine language programs for the 6502 processor of the system. The user enters commands from the keyboard specifying data and address parameters in hexadecimal. Multiple commands are permitted on the same line and editing features facilitate error correction. I completely wrote and debugged Apple BASIC using the monitor as my only software development tool. It was of course the first hand assembled program I wrote for the system. In addition to the direct monitor commands, a number of subroutines were included in the Appie-II's mask programmed system read only memory to provide easy access to hardware features. These are the service routines which are used by the monitor, as well as BASIC and any user routines you care to code. 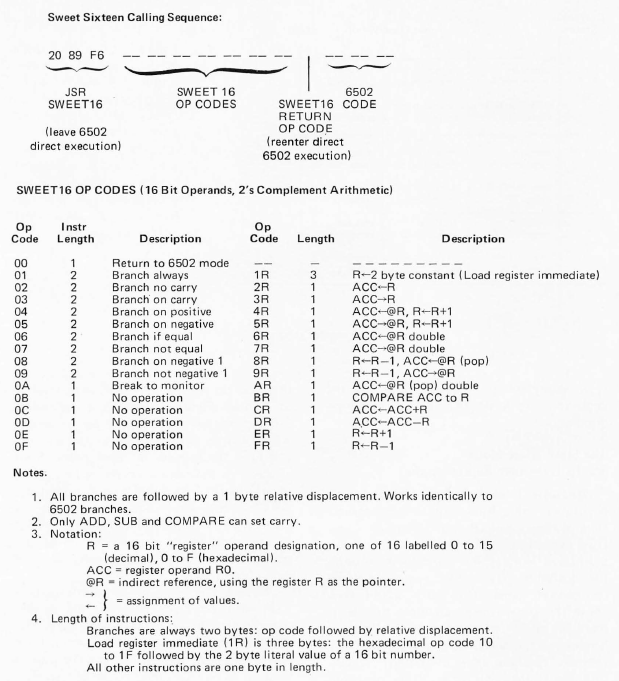 The Apple-II monitor read only memory also contains an interpreter program called SWEET16 which can be used from machine language programs to implement 16 bit arithmetic operations. This facility can prove quite useful) for example, in calculating addresses, and serves as an extension of the instruction set of the 6502 which is reached by the JSR SWEET16 escape sequence in code.

The Story of Sweet Sixteen

While writing Apple BASIC, I ran into the problem of manipulating the 16 bit pointer data and its arithmetic in an 8 bit machine.

My solution to this problem of handling 16 bit data, notably pointers, with an 8 bit microprocessor was to implement a nonexistent 16 bit processor in software, interpreter fashion, which I refer to as SWEET16.

Author's Note
So as not to slight their efforts, I would like to thank Allen Baum for originating the Apple-II debug software, Doug Kraul for helpful suggestions on the IO structure, and Randy Wigginton and Chris Espinosa for many long and late hours testing the Apple BASIC. ... SW
SWEET16 contains sixteen internal 16 bit registers, actually the first 32 bytes in main memory, labelled R0 through R15. R0 is defined as the accumulator, R15 as the program counter, and R14 as a status register. R13 stores the result of all COMPARE operations for branch testing. The user accesses SWEET16 with a subroutine call to hexadecimal address F689. Bytes stored after the subroutine call are thereafter interpreted and executed by SWEET16. One of SWEET16's commands returns the user back to 6502 mode, even restoring the original register contents.

Implemented in only 300 bytes of code, SWEET16 has a very simple instruction set tailored to operations such as memory moves and stack manipulation. Most opcodes are only one byte long, but since she runs approximately ten times slower than equivalent 6502 code, SWEET16 should be employed only when code is at a premium or execution speed is not. As an example of her usefulness, I have estimated that about 1 K bytes could be weeded out of my 5 K byte Apple-II BASIC interpreter with no observable performance degradation by selectively applying SWEET16.

Stephen Wozniak is a former contributor to BYTE