As Microsoft kicked off its Build 2016 developers' conference, Redmond gave coders a new toy to play with, specifically HoloLens. Developer kits are now shipping as markets for AR and VR are gaining traction.

Microsoft touted its HoloLens device at its Build 2016 developers conference this week in a move to entice third-party coders to sign up for its augmented reality efforts.

Redmond also timed the release of its HoloLens emulator and shipments of the HoloLens development kit with the start of the three-day conference, which began on Wednesday, March 30.

Microsoft is aiming to grab a piece of the augmented reality market, one that is expected to generate $120 billion in revenue by 2020, as DigiCapitalist estimated in a TechCrunch report.

As expected, it needs the help of third-party developers to create an ecosystem to make it happen. Microsoft announced at Build 2016 that it was releasing its Galaxy Explorer Project app for HoloLens on the open source site GitHub. 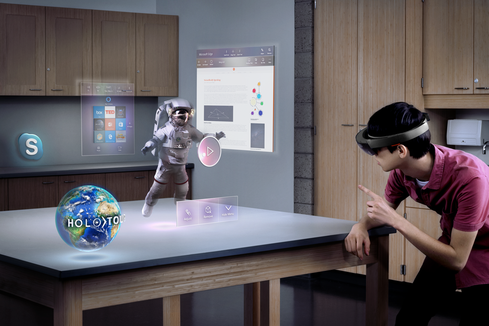 This move is designed to help developers create HoloLens apps.

During Build 2016, Microsoft HoloLens creator Alex Kipman touted the capabilities of HoloLens. The device is the only pair of augmented reality goggles that is untethered from a smartphone or other device, because it has computing power within the headset.

HoloLens uses spatial sound, voice support, gaze tracking, and gesture inputs to sense its environment, in ways similar to those of humans. It gathers information with the help of a number of sensors, such as mixed reality capture sensors, an ambient light sensor, four cameras, and four microphones.

HoloLens also runs on an x86 chip and custom-built Microsoft Holographic Processing Unit, with 64GB Flash and 2GM RAM memory. A number of these features are similar to the HoloLens version that was presented last month, and may overlap the features that were demonstrated at Build 2015.

Although developers can now get their hands on a HoloLens if they pay $3,000, or can use the free HoloLens emulator when it's loaded onto their computer, consumers will have to wait a while.

Microsoft's CEO Satya Nadella said in a BBC interview that commercial uses for the device are likely to first emerge, then evolve to consumers. He characterized it as a "five-year process."

Dawn Kawamoto is an Associate Editor for Dark Reading, where she covers cybersecurity news and trends. She is an award-winning journalist who has written and edited technology, management, leadership, career, finance, and innovation stories for such publications as CNET's ... View Full Bio
We welcome your comments on this topic on our social media channels, or [contact us directly] with questions about the site.
Comment  |
Email This  |
Print  |
RSS
More Insights
Webcasts
The Failures of Static DLP and How to Protect Against Tomorrow's Email Breaches
Protecting Your Enterprise's Intellectual Property
More Webcasts
White Papers
5 Steps to Zero Trust in the Data Center
SANS Report: Measuring and Improving Cyber Defense Using the MITRE ATT&CK Framework
More White Papers
Reports
2020 State of Cybersecurity Operations and Incident Response
2020 State of DevOps Report
More Reports

I'm pretty excited to see what comes of the Hololens. Clearly the technology needs to come down a lot in terms of consumer cost before we can expect it to catch on, but it has a lot of exciting potential.

I wonder if we'll see the more dominant VR company start edging into AR too in the near future. The two technologies could merge easily enough with a powerful enough system.

We just need wireless transmission so the hardware doesn't have to be in the headset.
Reply  |  Post Message  |  Messages List  |  Start a Board
Editors' Choice
Hot Topics