The debate over the merits of hybrid cloud have taken a back seat to discussions of the rapid advance n services of the public cloud and the possibilities of remaking the data center as a private cloud. Hybrid cloud is something in between, and in some cases, fails to achieve the virtues of either one.

But a Harvard Business Review Analytic Services survey offers a different conclusion: For some companies, hybrid cloud is the strategic imperative that will move them forward into the digital economy.

The survey obtained 347 responses from readers of the Harvard Business Review and its newsletters, management visitors to the HBR.org site and customers of the magazine and HBR Press books. Although it was not aimed specifically at small and medium business, 60% respondents came from companies with 1,000 employees or less; 36% of those were from companies with fewer than 100 employees.

The resulting report, Hybrid Cloud Becomes a Strategic Imperative, addresses the impact of hybrid cloud operations mainly on medium-sized and smaller companies. For these companies, hybrid cloud is less a tactical decision to save money, and more of a strategic decision to obtain a platform for collaboration, whether internally or with partners and customers.

Twenty-nine percent of the survey's respondents were executive management; 28% were senior management; 31%, middle management; and 12% from other pay grades.

The survey was sponsored by Insight, a Tempe, Ariz., consulting company founded in 1988  in the field of IT system integration and cloud migration. A copy of the report may be downloaded from the Insight.com site.

Forty-nine percent of the respondents said one form or the other of cloud computing had "significantly improved collaboration," with business agility and flexibility a close follow-up at 45%. The cloud in one form or the other had improved their ability to analyze, act on or share data, according to 43%. It had also improved their ability to empower employees and create a better user experience, 42%. 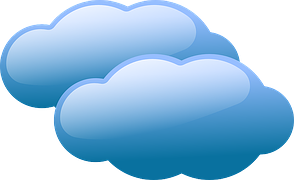 When it came to revenue and overall business growth, 17% of large company representatives said that was a benefit of their hybrid cloud use; 38% of small and medium-sized companies made the same claim.

The types of systems most likely to end up on the public side of the hybrid cloud were: email and communications tools, 54%; billing and invoicing, 29%; business intelligence, 29%; payroll, 26%; customer service, 24%; and project management, also 24%.

The report cited Carl Lehmann, principal analyst on enterprise architecture at 451 Research: “It’s gone beyond cost savings. Now companies are recognizing that cloud architecture can enable them to re-automate their businesses in different ways very quickly.”

The small and medium business involved in the survey said they were left at a competitive disadvantage when they lagged in their public/private cloud adoption and rivals proceeded ahead of them. They said they would be at a permanent disadvantage in partner collaboration, customer communications and producing new products for market if they didn't make more extensive use of hybrid cloud computing.

“If they have to re-code a system to introduce a new process, that’s not as agile as doing it through low-code, work-flow enabled infrastructure, which is available in most cloud architecture,” Lehmann was quoted as saying in the report.

Charles Babcock is an editor-at-large for InformationWeek and author of Management Strategies for the Cloud Revolution, a McGraw-Hill book. He is the former editor-in-chief of Digital News, former software editor of Computerworld and former technology editor of Interactive ... View Full Bio
We welcome your comments on this topic on our social media channels, or [contact us directly] with questions about the site.
Comment  |
Email This  |
Print  |
RSS
More Insights
Webcasts
Detecting and Preventing Insider Data Leaks
Optimizing App Performance in the Cloud
More Webcasts
White Papers
Why Add Security to Your Skill Set and How to Do It
Protection Strategies for a Cyber-Resilient Organization
More White Papers
Reports
Protection Strategies for a Cyber-Resilient Organization
Building the SOC of the Future
More Reports

Cloud environments allow for an agile, speedy deployment. Further, by leveraging hybrid and public cloud environments. Organizations reduce their total cost of ownership by 20%-40%, freeing them to allocate more of their budget toward innovative, business outcome-focused efforts. Organizations considering a cloud move look at implementing a solution that has a mix of on premise, and public or private cloud, referred to as a hybrid cloud model. Hybrid cloud resolutions are typically thought-about by organizations as a key element of a business continuity resolution wherever vital information is replicated to a cloud solution during a completely different location to the first systems. Hybrid cloud definitely provides innovation and scalability.Here's an informative case study on Hybrid cloud architecture https://velocitycloud.com/resources/whitepaper/considerations-for-sap-hybrid-cloud-infrastructure-powered-by-aws
Reply  |  Post Message  |  Messages List  |  Start a Board

For the small and medium businesses that get engaged with it, cloud computing will prove as much or more of a boon than it does to the big enterprises already using it. The cloud can provide them IT services that they are unlikely to ever employ themselves, especially large -scale scalability and arfificial intelligence.
Reply  |  Post Message  |  Messages List  |  Start a Board
Editors' Choice
Hot Topics