IT professionals in government, as in all industries, are under pressure. Sure, resources are tight, and legacy IT systems and processes are the norm, but there's also a growing expectation among the public that government agencies be more transparent and efficient and that their services be Web-enabled. What are government IT organizations to do?

Many are getting creative in how they apply technology to meet their mandates. At the local, state, and federal levels, government technologists are employing Web 2.0 tools, cloud computing, and new applications and systems. "There are innovators throughout government," says Tim O'Reilly, CEO of O'Reilly Media, co-sponsor of the Gov 2.0 Summit and Gov 2.0 Expo Showcase with TechWeb, publisher of InformationWeek. O'Reilly says the Obama administration's emphasis on transparent, participatory government gives government IT pros "air cover" for doing things differently. "I'm seeing a lot of receptivity," he says.

In our July 6 report, "Government IT On The Leading Edge," InformationWeek Government profiled a handful of government technology projects that are representative of a new way of doing things, including the Transportation Security Agency's Idea Factory Web site, Darpa's Personal Assistant that Learns, and NASA's work on disruption-tolerant networking.

Those examples are but a sampling. In April, InformationWeek Government invited government agencies to tell us about their most innovative IT projects, and dozens of nominations poured in. What follows are 10 of the most compelling examples.

Carolyn Lawson, CIO of the California Public Utilities Commission, which oversees the state's electric, natural gas, telecom, water, and public transportation sectors, has created a software-as-a-service environment called Open Campus. It lets employees conduct videoconferences, share secure instant messages, and access collaboration tools over a wireless network. The Open Campus architecture supports secure computing through a combination of thin-client devices, an SSL VPN, and shared storage. For an investment of about $100,000, Open Campus should pay for itself in network savings alone, Lawson says.

The District of Columbia's Office of the CTO (the former office of federal CIO Vivek Kundra) started two years ago with a data warehouse that made more than 200 data catalogs and feeds available to developers, which in turn led to an application development contest called Apps for Democracy. In a span of 30 days, developers created nearly 50 applications, including local guides for biking, parking meters, historic tours, and community gardens. For an investment of about $50,000, the Office of the CTO estimates that the District was on the receiving end of $2.6 million in software development. 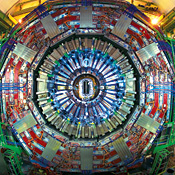 The Department of Energy's ESnet4 transmits terabytes of data in seconds, including sets generated by the Large Hadron Collider (above)
Department Of Energy

The Department of Energy's Energy Sciences Network (ESnet) has developed a network that can transmit terabytes of data in seconds. ESnet's ESnet4 network, completed late last year, was built in partnership with the Internet2 consortium to support the transfer of, and access to, huge data sets, including those generated by the Large Hadron Collider. Combining packet and circuit switching for flexibility and resiliency, ESnet4 incorporates an ESnet-developed protocol called Oscars (for On-Demand Secure Circuits and Advanced Reservation System) that lets researchers request bandwidth as needed.

The National Institutes of Health's Federated Identity Service addresses one of the main obstacles all government agencies face in sharing information with the public: accessibility. The service lets authorized users at hospitals, universities, and national labs, and in pharmaceutical and biotech research, access NIH databases and information via their organizations' existing authentication processes. The service provides secure, single-sign-on access to more than a dozen applications, such as a National Center for Research Resources wiki used by 1,200 members at 38 universities.