And The Winner Is: Big Data Oscar Picks - InformationWeek

This year's Best Picture will be 12 Years A Slave, according to Academy Award prognosticators at Farsite. Will big data get it right?

Predicting Oscar winners at the Academy of Motion Picture Arts and Sciences annual Academy Awards show is a longstanding tradition among movie geeks, entertainment industry press, and people with too much time on their hands. Who else likes guessing the Oscars? Data scientists demonstrating the power of their prediction models, that's who. That's the case with Farsite, an analytics division of IT services provider ICC.

The analytics folks at Farsite have posted their annual Oscar night predictions, as well as a brief overview of how their statistical model works. If last year's predictions are any indication, Farsite's data geeks are either very good at movie-award prognostication -- or really lucky.

Before taking a closer look at Farsite's statistical model, let's run through its predictions for the 2014 Oscars, which take place on Sunday, March 2. Based on current data, the Best Picture winner will be (drumroll, please) 12 Years a Slave.

[Hiring or looking for a big data job? Read Big Data Hiring: 5 Facts From The Field. ]

To see the latest odds for each nominee, check out Farsite's Oscar forecast page, which updates its predictions throughout the day.

To forecast probabilities for the winners, Farsite's statistical model incorporates more than 40 years of movie industry and Academy Award-related information, the company says. These film factoids include real-time data and numerous variables, including nominees' previous winning performances and nominations, other guild nominations and wins, and the ever-important -- if intangible -- industry buzz. 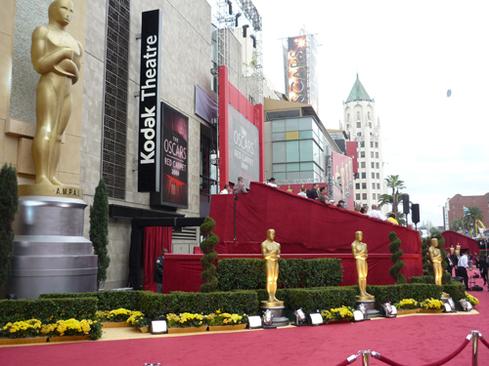 Farsite predicted winners in five out of six categories at the 2013 Oscars.
(Image: Wikimedia.)

"Statistically, we know that tracking the other awards will hone our predictions this week before the Oscars. And that's right now!" Farsite writes.

The prediction model factors in voting results from recent awards-season contests, including the Critic's Choice and Golden Globes events, and data from betting lines and prediction markets. Nominees and winners from Producers Guild, Screen Actors Guild, Writers Guild, and Directors Guild voters are incorporated as well. The model also takes into account each nominee's previous nominations and award histories.

Social media buzz might have less impact on Oscar voting, however. Farsite says that although Leo DiCaprio might be getting a lot of Twitter and Facebook love this week for his Best Actor-nominated performance in The Wolf of Wall Street, the Academy's 6,000 voting members will likely choose McConaughey. That's a prediction based in part on voting results of earlier awards.

"Our predictions are far more than lucky guesses. Most people are surprised to hear that the same sophisticated predictive modeling we use in industries like retail and healthcare can predict Oscar winners quite accurately," said ICC chief science officer Ryan McClarren in a statement.

Will Farsite's predictions ring true this year? Or will its big data statistical model flop like The Lone Ranger did last summer? The envelope, please.

Jeff Bertolucci is a technology journalist in Los Angeles who writes mostly for Kiplinger's Personal Finance, The Saturday Evening Post, and InformationWeek. View Full Bio
We welcome your comments on this topic on our social media channels, or [contact us directly] with questions about the site.
Comment  |
Email This  |
Print  |
RSS
More Insights
Webcasts
Keys to Better Cyber Risk Assessment
Take DevOps to the Next Level
More Webcasts
White Papers
CPRA: The Simple Guide
How to Avoid the Challenges of Cross-Platform Data Access Governance
More White Papers
Reports
We Need Your Input: Trends in Workforce Optimization
The State of Endpoint Security
More Reports

Perfect on all 6 major categories is not a percentage I would have guessed. Now can we get these guys working on winter storm forecasts?
Reply  |  Post Message  |  Messages List  |  Start a Board

The big data engine won-- perfect on all six major categories. Without any truly shocking winners, I'll still have to see how big data does next year before I'm convinced. But credit where it is due!
Reply  |  Post Message  |  Messages List  |  Start a Board

For those who don't know, the Academy uses a preferential voting system that's sort of confusing. If there's a clear favorite that gets more than 50% of first-place votes, the system doesn't really matter. But if there are several strong contenders, the strangeness of the system can swing the results.

Basically, each of the ~6,000 voters ranks nominees (from 1 to 9, this year). If no film has a majority of #1 votes, the film with the fewest #1 votes is eliminated. Second-place choices from ballots that chose the eliminated film are then redistributed. That is, if Philomena is eliminated first, a ballot that ranked Philomena first and American Hustle second becomes a first-place vote for American Hustle. This process continues until a winner is crowned.


A movie like The Wolf of Wall Street is a long shot in this system. It only has a chance because there are enough strong contenders to split voting. It will have a lot of passionate support-- but probably not enough for more than 50% of voters to rank it #1. It will also have strong detractors-- which means that when votes get redistributed, Wolf falls behind. "Love it/Hate it" movies don't do well in this system, which is why uplifting, emotional stuff wins more often than darker movies.

Nebraska and some of the other Best Pictures nominees that are likely to be eliminated early will actually dictate the winner. If the people who voted for Nebraska and Dallas Buyers Club liked Gravity more than 12 Years a Slave or American Hustle, that could decide the winner.
Reply  |  Post Message  |  Messages List  |  Start a Board

Good context re the change in voting procedures, Michael. We will have to see whose predictions are right. Will Michael beat the big data engine? Stay tuned.
Reply  |  Post Message  |  Messages List  |  Start a Board

The Oscars changed voting procedure in recent years, which makes historical data somewhat less useful. Awards campaigning, the influence of industry guild awards, and other recent developments also mitigate the importance of older data. Even voting trends from the last decade have fallen flat for predicting the last few years' winners. So I'm not sure how much useful data there really is to analyze, let alone in a "big data" sort of way. But still, it's fun to predict.

Academy members often choose accessible or uplifting movies over difficult or complex ones. Argo over Zero Dark Thirty. Crash over Brokeback Mountain. The King's Speech over The Social Network. Based on online buzz, at least some Academy members find 12 Years A Slave (an important but uncompromisingly brutal movie) too difficult to watch.

That opens the door for Gravity. Picture and Director usually go together, and if Cuarón doesn't win director, it will be a monumental upset; he's won every major precursor award, including the DGA (which shares a lot of membership with the Academy). That said, Ben Affleck wasn't even nominated last year, when Argo won, so again-- precedent doesn't mean as much as it might seem. Moreover, many Academy members rely on DVD screeners, instead of actually going to a movie theater. If any movie's full power relies on the big screen experience, it's Gravity. If this negatively impacts Gravity's Best Picture chances, that could swing favor back to 12 Years A Slave, or open the door for...


American Hustle, most likely. It has nominations in every acting category, which rarely happens, and actors make up the largest branch of the Academy. If the actors really love American Hustle, they could push it over the top, even if all the technical branches go for Gravity. The Wolf of Wall Street, which is divisive but will have some of the most passionate fans, could also unexpectedly prevail in a split-vote situation.

My prediction? I think Farsite got most of them right, but I think Gravity will probably eke out Best Picture, and don't be surprised if Jennifer Lawrence wins Best Supporting Actress. If American Hustle doesn't win Best Picture, the enthusiasm from the actors' branch will have to show somewhere, and Supporting Actress looks like the best bet.
Reply  |  Post Message  |  Messages List  |  Start a Board

Social counts are often muddied by bots and paid-for actions, too. I'll be interested to see how accurate these predictions are come Sunday.
Reply  |  Post Message  |  Messages List  |  Start a Board

The point about Twitter buzz indicating one actor's fanbase, as opposed to how the academy members will actually vote is a good example that I will use again. Too many people misread pure social "counts" for business results.
Reply  |  Post Message  |  Messages List  |  Start a Board
InformationWeek Is Getting an Upgrade!