Data, Algorithms, and Air Travel: The View from Coach - InformationWeek

I got bumped from my flight a few months after Dr. David Dao was dragged off an overbooked aircraft. Do algorithms help or hurt the typical air traveler? 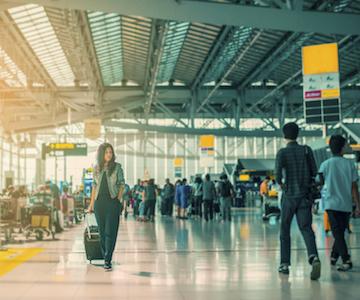 While some airline travelers may enjoy plenty of perks (and make sure you tell us what your favorite one is in the comments of this post) there are also those of us who are the riff raff of the skies, perpetually in boarding group eight out of eight, whose seats always seem to be the middle ones in the last row -- the seats that don't recline.

I was reminded of this a few months ago when I was bumped from my return home flight from the Interop ITX event in Las Vegas. Just what role did algorithms play in my missed flight, and will such inconveniences be eliminated as analytics grow more sophisticated?

The first sign of a problem was when I checked in and my boarding pass did not show an assigned seat. This was a few months after United Airlines entered a legal settlement with Dr. David Dao, the passenger whose removal from an aircraft was captured on video and posted to social media. Unless you've been living in seclusion, you probably remember that security dragged Dao from the plane, following the airline's instructions to remove him, even though he had an assigned seat and he had already boarded.

So as I sat in at the gate in the boarding area in May, all the other passengers and I whose boarding statuses were in limbo were more acutely aware of what our rights were than we would have been a few months earlier. And even if we weren't, we could Google them on our mobile phones and find out in an instant what we should do.

That marked a big difference in how things used to be 10 or 20 years ago. Back then, Dr. Dao's experience would never have received the attention it did because no one would be capturing the video and posting it to social media. If Dao had filed a complaint back then, arguably his written words wouldn't grab the attention of millions of people. And the airline's account would almost certainly carry much more weight than the passenger's account. The video combined with social media was a great equalizer.

And so was my access to information on my mobile phone. Yes, gate agents have all the information about what seats are available to me on later flights. But now I also have a better idea of what my rights are and what accommodations I am entitled to as a paying passenger who got bumped, because I can look them up on my phone. (Also, I was able to show the gate agent the sad-faced selfie sent to me by my 9-year-old son after he found out that I wouldn't be home in time to see him before he went to bed that night.)

The airline offered vouchers to encourage people to volunteer to be bumped. I held out until the end. It was only then that the airline told us that it had switched from the original aircraft to a smaller aircraft with fewer seats, which is why we all were getting bumped, and why we weren't entitled to much of anything in return. They offered us vouchers because of good will, not because they were legally required to do so.

It made me wonder if there is some algorithm on the back end that is designed to assign aircraft and make changes based on revenue, cost, pricing, risk of customer dissatisfaction, and necessary crew member movements.

My experience in May also reminded me of this story from a few years ago about an algorithm for consumers that provided them with information to get better airfares by understanding how the airlines price different trips based on whether they are round trip or multiple stops. United Airlines didn't like it and the company sued the creator of the app and algorithm. But a judge threw that out, effectively letting stand the idea that businesses aren't the only entities allowed to use algorithms to their own financial advantage. Consumers can have access to that, too.

I'd originally planned to be home on my direct flight at around 7 pm that evening. Instead I was routed through Dallas amid thunderstorms and delays and ended up at home in the wee hours of the morning the next day.