No, AI Won't Kill Us All - InformationWeek

When famous technologists and scientists fear the menace of thinking machines, it's time to worry, right? Not really, because computers lack the imagination to wreak havoc, says one AI expert.
8 Google Projects To Watch in 2015
(Click image for larger view and slideshow.)

The sentient, self-aware, and genuinely bad-tempered computer is a staple of science fiction -- the murderous HAL 9000 of 2001: A Space Odyssey being a prime example from the genre. Recently, though, more than a few of the world's top technological and scientific minds -- most notably Bill Gates, Stephen Hawking, and Elon Musk -- have warned humanity of the threat posed by artificial intelligence. In fact, AI has even been named one of the "12 risks that threaten human civilization," according to a new report from the Global Challenges Foundation and Oxford University’s Future of Humanity Institute.

Whoa. So perhaps it's time to step back from the precipice of Skynet-like apocalypse? Maybe focus on making computers a little less smart -- or at least less autonomous?

No, actually it’s a good time to take a deep breath and relax, says Dr. Akli Adjaoute, founder and CEO of Brighterion, a San Francisco-based provider of AI and machine-learning software for healthcare and identity fraud, homeland security, financial services, mobile payments, and other industries. Adjaoute has a PhD in artificial intelligence and mathematics from Pierre and Marie Curie University in Paris. He has spent the past 15 years developing AI technologies for commercial applications.

In short, Adjaoute knows his stuff, and he says AI's ominous potential is vastly overblown. 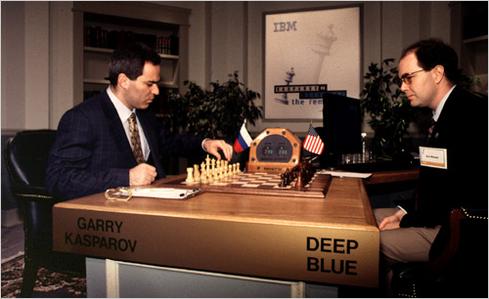 (Image: No comparison: Kasparov versus Deep Blue via Stanford University)

In a phone interview with InformationWeek, Adjaoute provided a very simple reason the fear of malevolent, thinking machines is unfounded: Computers, unlike people, have no imagination.

"Suppose I'm on the 10th floor, and I'm talking to you from my office," said Adjaoute. "I say, 'Hey, could you please take this bucketful of water, and run to the reception [area] on the first floor?' What happens? You'll say, 'Oh, I will get wet, because the water will splash on me if I run.'"

The human mind, he noted, can imagine that carrying an open, sloshing bucket of water across office floors (and possible down several flights of stairs) will likely cause water to spill out of the bucket and onto the carrier's clothing. That's imagination at work.

A computer lacks similar cognitive capabilities, however. Rather, it's very, very fast at carrying out instructions.

Even powerful AI systems such as IBM's Jeopardy!-winning Watson, don’t mimic the human brain. (The same can be said for IBM's Deep Blue computer, which in 1997 defeated world chess champion Garry Kasparov in a six-game match.)

"We don't claim that Watson is thinking in the way people think. It is working on a computational problem at its core," IBM research scientist Murray Campbell, one of the developers of Deep Blue, told the New York Times in 2011.

"The computer doesn't even know it's playing chess," said Adjaoute of Deep Blue. "It's just another level of stupid calculation." 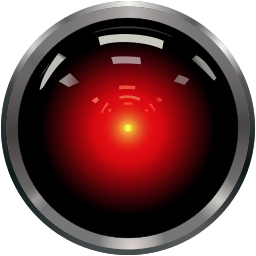 "How are you going to have self-awareness if all the program does is look to the data, and analyze it with zeros and ones?" said Adjaoute. "How will it be aware of what it's doing? It's impossible."

He added: "I am tired of seeing artificial intelligence become the boogeyman of technology. There is something irrational about the fear of AI."

I have been there for sure! We used a software in our company a decade ago (if I remember right it was from Citrix) that allowed us to share files with our out of state offices. One woman in our office refused to close it out when she was done and thought it should just continue running well no matter how long she left it running idle. Then, when she did shut down her PC she would hit the power button on the box and do a hard shut down every time. Every time she restarted her PC she wanted to know why she got the screen telling her that Windows did not shut down correctly. Like you said, no matter how many times she was told or shown she still didn't think she REALLY needed to do things a certain way.
Reply  |  Post Message  |  Messages List  |  Start a Board

I could not agree with you more! People have become lazy because of the convenience of technology. I home school my kids and a couple years ago my daughter had to go take a state math test and one of the items she was REQUIRED to bring to the test was a calculator!! When I was in school it would have been straight to the principals office if you got caught using a calculator during a test. I guess, now, they are teaching kids how to use technology to find an answer rather than their brains!
Reply  |  Post Message  |  Messages List  |  Start a Board

Yes, at that point we would definitely need a kill switch!!!

And, I did finally get an email notification about 1:00 pm today for your reply, and a couple more showed up as well! It seems to be fixed! (Knock on wood). Thanks for your help!!
Reply  |  Post Message  |  Messages List  |  Start a Board

@StacyE- It is true. If they start programming themselves, I guess you have to worry. But I'd like to think somewhere in the back of all that is a seed our our programming. Of course, each generation gets a little farther away from the original and less like our intent. Hrm...sounds like what we need is an off switch like with the droids in Star Wars Episode 1. :)
Reply  |  Post Message  |  Messages List  |  Start a Board

This is a very good point, but like you said, the chance for human error still exists through the programming. I think it would be a little scary (to say the least) if the computers started creating and programming each other and elliminated its need for human interaction.

BTW David, I emailed tech support several weeks ago and never heard back from them. It appears I am still not getting notification emails when my posts are replied to directly. Could you do me a favor and reply to this one to see if maybe they have fixed it in the mean time?
Reply  |  Post Message  |  Messages List  |  Start a Board

We work soley in a Citrix environment - we have few local apps. Every night it is necessary to right-click the Citrix icon, log off your sessions, then it is good measure to click Start, Restart. I can't tell you how many people just leave documents open for weeks on end and are surprised (and enraged at us) when the Citrix session finally fails to reconnect and their docs are shot into oblivion. It doesn't matter how many training sessions we offer or how many email reminders we send. It's not a mystery. It is how the system works. But for some reason people believe the computers "should just work" regardless of whether or not they follow the rules. It's shocking to me even though I should be used to it by now!
Reply  |  Post Message  |  Messages List  |  Start a Board

@StaceyE - What a great point. And this is where we can see how overly-reliant we've become on technology and computers - to the point where it arguably makes dumbs us all down a bit (no need to even know how to spell any longer with the advent of spell check/autocorrect/google). The absolute worst for me is when someone calls stark raving mad because they are at a "work-stoppage" because one thing on their system isn't "working." Just one example that pops into mind, if double-clicking on a file won't open, why not try opening the program first then browsing to the file and see if that works instead of calling the poor on-call help desk person in the middle of the night and screaming at them? Or instead of printing out 100 copies on your printer when it's low on toner when you're working at midnight on a deadline why not print one copy and go to the copy machine? Technology has robbed many of common sense and given people tunnel vision.
Reply  |  Post Message  |  Messages List  |  Start a Board

Look, really the only thing people can do is keep themselves educated and trained in a field that's in demand. Government should make sure this education is available and affordable.
Reply  |  Post Message  |  Messages List  |  Start a Board

@broadway.  I understand those concerns and have read many articles which support what you have.  But, there isn't much we can do, is it . If companies are introducing such technology in the workplace, as people in these changing times, the only thing we can do is adapt and accept what is coming to us.  I don't see any news that our government plans to do something to change this trend.
Reply  |  Post Message  |  Messages List  |  Start a Board

@StacyE- Interestingly enough, we're starting to get computers that can digest information without human intervention. Of course, they still rely on humans to program them so ultimately the humans can still make a mistake. But I wonder if our relationship with computer mistakes will change when that is more common.
Reply  |  Post Message  |  Messages List  |  Start a Board
Page 1 / 4   >   >>
Editors' Choice
Hot Topics