Among the growing number of potential applications for blockchain is border management and security.

Today, one technology stands apart with the potential to profoundly change the way we manage business transactions -- blockchain. A favorite buzzword that few people actually understand, blockchain is essentially a new type of database system that maintains and records data to allow multiple parties to share information more securely and confidently than ever before.

Even in its infancy, blockchain is showing great promise across a wide range of industries and applications. It empowers financial institutions to resolve security concerns in a fraction of the time. It enables manufacturers to track inventory across an entire supply chain with greater precision and confidence. Blockchain gives nearly every industry the ability to manage the flow of goods and payments more accurately, improving efficiencies and significantly lowering risk.

The potential of blockchain is so deep that even the most sceptical are predicting that the technology could revolutionize the entire spectrum of business and trade. Indeed, blockchain offers a new kind of infrastructure that could lay the foundation for the next generation of digital business applications.

Just as blockchain has the potential to create greater reliability, efficiency and speed in the private sector, it also holds tremendous potential for government agencies and NGO’s. Blockchain has the potential to be a revolutionary tool for border management agencies that need to manage the complex movements of good across borders. The most critical element behind Blockchain is the concept of trust. In today’s society, trust is a valuable commodity, and one that is constantly questioned. How can we truly believe that an individual is who they say they are? How can I be assured that my goods are genuine and that they will arrive safely? Can I trust this companyto deliver the item I’ve purchased on-time and securely.

Blockchain eliminates the need for trust. In its place, you now have a verifiable truth. Something that’s written or amended on a blockchain “distributed ledger” in one place is copied so that others who are authorized to view the same ledger can see any updates. Blockchain makes it impossible to change any part of the ledger without changing all the others in concert.

This represents a significant breakthrough for border and customs services. The impact of these developments will be enormous across the border control industry in the coming years.

Today when you fill out a customs declaration, for example, it eventually shows up in a system that an authorized official will see. Blockchain however, makes the declaration visible the moment it’s submitted. It becomes an irrefutable document for any authorized party to access. Thus, an importer can trust the information in the declaration; what’s in the consignment and whether the financing is legitimate. Added to this, the deployment of Internet of Things technology can allow importers to track the declared goods along the supply chain, easily able to distinguish if goods have been tampered with in transit.

The advantages blockchain offers border management agencies are staggering. Preventing trade finance fraud, for example, will become less of a challenge for customs agencies around the world. Today, someone could claim that they’re shipping the same delivery to four places simultaneously, using duplicate documents to obtain finance from multiple parties. Blockchain, however, enables officials to instantaneously view the financing information for each shipment, essentially eliminating the opportunity for fraud.

Blockchain holds the potential for profound positive disruption beyond customs and trade. In the future, individual travelers could store all their important documents and records in one secure, accessible place via blockchain -- passports, visas, tickets, credit cards, travel history and more. At the same time, blockchain could allow millions of refugees to quickly verify their identities using a smartphone or other mobile device, giving them access to aid and other critical social services in their host country. The UN recently unveiled a new tool, developed in partnership with Microsoft and Accenture, that combines biometric data and blockchain to help create a permanent, verifiable digital identity for each user.

Not only does this development make travel more convenient for people, especially when going through immigration, it also greatly enhances border security measures. This use of blockchain technology offers border agencies visibility into an individual’s documentation and travel history, including the jurisdictions they have visited and when. Security related events at airports and border crossings in recent years underscore the potential value of this type of technology.

A decade ago, it would take a new technology about five years to go mainstream; today the pick-up is much swifter, anything from three months to one-year. Blockchain at the border will be a reality sooner than later, bringing with it greater security and wider benefits for traders and travelers alike. 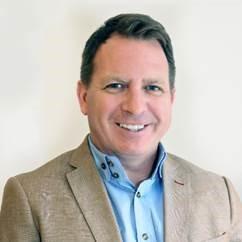 James Canham is managing director, Accenture Border Services. His role focuses on helping clients to tackle the issues around facilitating travel, speeding up processing and aiding security at the world’s borders. His responsibilities involve customs, border and identity management and the increasing virtualization of physical borders. In addition to his current role, Jim also serves as a member of the Confederation of British Industry’s London Council. He has also written and contributed to a number of publications on customs and border management, and advised the World Bank in developing their Border Management Handbook.

Jim gained a Bachelor of Arts in Geography from Kent University, a Master of Science in Environmental Economics at the University of London and an MBA from the ENPC International School of Business Management in Paris.

The InformationWeek community brings together IT practitioners and industry experts with IT advice, education, and opinions. We strive to highlight technology executives and subject matter experts and use their knowledge and experiences to help our audience of IT ... View Full Bio
We welcome your comments on this topic on our social media channels, or [contact us directly] with questions about the site.
Comment  |
Email This  |
Print  |
RSS
More Insights
Webcasts
Bolstering Your Enterprise Cyber Risk Assessment
Disaster Recovery/Business Continuity in the New Normal
More Webcasts
White Papers
4 Key Elements of an ML-Powered NGFW: How Machine Learning is Disrupting Security
Research from STL Partners and Vertiv Reveals Why Telcos Should Prioritize Efficiency and Sustainability in 5G Network
More White Papers
Reports
The State of Cybersecurity Incident Response
2021 Application Security Statistics Report Vol.2
More Reports