SEARCH
A minimum of 3 characters are required to be typed in the search bar in order to perform a search.
Announcements
Alert
Got some free time? Grow your knowledge from the comfort of your computer for FREE!
Alert
Are you looking to stay on top of IT trends? Check out our FREE webinars and virtual events!
Alert
Planning for 2023? Be sure to check out our upcoming in-person events!
Report
How does your salary stack up? 2022 IT Salary Survey Results Revealed
PreviousNext
Cloud
2 MIN READ
News

Glide is a media-sharing, communications, productivity, and file-storage service that runs on Web browsers using Linux, Mac OS X, and Windows, and on dozens of mobile devices.
Thomas Claburn
Editor at Large, Enterprise Mobility
May 27, 2009 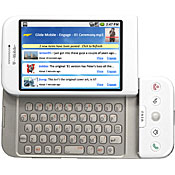 Company CEO Donald Leka describes it as "Twitter with substance."

Glide is a media-sharing, communications, productivity, and file-storage service that runs on popular Web browsers using Linux, Mac OS X, and Windows, and on dozens of mobile devices. The social networking tool merges the concept of cloud computing with desktop computing by synchronizing local files with remote copies on Glide's servers.

Launched at the end of 2005, Glide just recently surpassed the million-user mark, thanks partly to a deal with Time Warner Cable last October to make the media-sharing service available to the cable company's Road Runner Internet customers.

About 35% of Glide subscribers use the service mostly for mobile communications. "Mobility is good for us right now," said Leka.

Engage extends Glide's rights-based file-sharing system to Twitter-style micro-blogging, allowing users to post links to personal files and to specify viewing or editing rights. Thanks to Glide's bidirectional syncing capabilities, changes made to posted files get replicated to the appropriate desktop copies of those files.

Engagements, as Glide calls these sequences of posts, can be archived as Adobe PDF, Glide Write, or Microsoft Word documents.

In contrast to Twitter's 140-character limit, Engage allows up to 1,400 characters. And if that's not enough, Glide documents can be inserted into Engagements.

Engage users can invite those who aren't Glide subscribers to participate in their Engagements via e-mail. Engagements can be public or private and are searchable.

According to Leka, Engage is also being made available as a white-label service that can be branded and deployed by partners.


What's the state of wireless adoption in the enterprise today? Take part in our survey by June 2 and let us know. Upon completion, you'll be eligible to enter a drawing to receive one Apple 16-GB iPod Touch valued at $299.