Cloud ROI: Why It's Still Hard To Measure - InformationWeek

Why does calculating cloud ROI remain so tough? Examine the tactics used by two cloud innovators, GE and Airbnb -- plus our exclusive survey.

Read the entire Aug. 4 issue of InformationWeek — no registration required.

When it comes to judging the true cost of cloud computing, many companies try to break down the cost of running their own on-premises data center and compare that with the cost of using Amazon's or Microsoft's cloud. At Airbnb, Dave Augustine doesn't really have time for all that.

The six-year-old Web company has never had its own data center. Airbnb launched its service, which matches travelers with people looking to rent out a room or other accommodation, using the Amazon cloud, and its developers still build all their applications for Amazon's EC2. Having more than one cloud infrastructure provider, says Augustine, Airbnb's manager of site reliability engineering, "is an interesting idea" he might look at someday -- perhaps after Airbnb doubles its bookings again. As for determining his company's return on investment on Amazon services, Augustine calls that "penny-pinching."

Augustine and Airbnb land in the minority of respondents to this year's InformationWeek Cloud ROI Survey -- the 20% of companies that don't calculate ROI for their cloud projects. The other 80% of the 339 companies using or evaluating cloud computing say they're highly to somewhat likely to calculate ROI for cloud projects. "Right now, we have better things to do," Augustine says.

While the 122-year-old General Electric also is "all-in on the cloud," says GE Cloud chief operating officer Chris Drumgoole, its approach is dramatically different from Airbnb's. Unlike Airbnb, the 300,000-employee GE wasn't born in the cloud and must find a way to migrate a massive legacy application infrastructure. GE operates 34 company-owned data centers and runs more than 9,000 applications. It's now consolidating to five data centers and painstakingly evaluating which applications it will rearchitect and move into a private or public cloud, and which ones it will phase out. It's also using software-as-a-service selectively, striking a deal in May, for example, to give employees access to Box online storage. 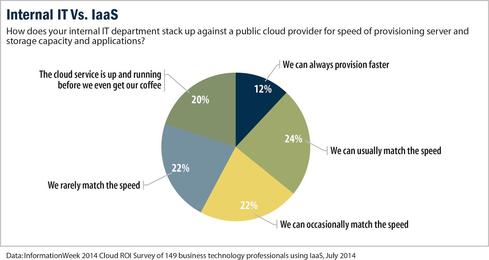 And if you know GE, the king of managing through metrics, you know it's basing its cloud decisions on intense ROI calculations. Put GE among the 23% of respondents in our Cloud ROI Survey who are highly likely to calculate ROI.

But cloud ROI calculations are difficult, even for a company as steeped in analytics as GE. Unlike Airbnb, GE wants multiple cloud infrastructure providers; it's using Amazon and Microsoft Azure today, and it plans to use Verizon's cloud. "We envision a world metric that measures application performance" across vendors, Drumgoole says, but such a measure won't be possible until GE has at least a year of captured experience, and probably several years' worth. 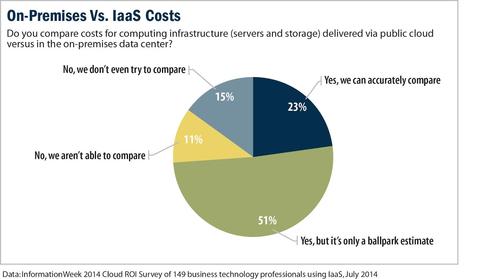 The stories of Airbnb and GE reflect the reality of cloud computing technology. Operationally, cloud technology has proved itself capable of handling large-scale infrastructure and software needs. Financially, however, companies still are struggling with the right way to calculate the payback; how to measure the cloud's value in speed, cost, and staff focus; and how to assess where cloud use makes the most sense.

The responses to InformationWeek's Cloud ROI Survey reinforce that uncertainty. Some notable findings:

Keith, XComponents sounds like a good idea. Do you have other developers working with you on this project? Agreed app development for the cloud or migration of apps to the cloud is an important cost point. I'm looking for new ways of using Docker to cut  some of those costs. How about the micro services approach, where every application service is run in its own Docker container?
Reply  |  Post Message  |  Messages List  |  Start a Board

GE isn't making a wholesale shift to the public cloud; it's experimenting, measuring, while also building company-owned, private cloud capacity. We've seen other leading companies take a similar approach -- FedEx CIO Rob Carter has been driving this strategy, building a data center on a private cloud architecture that mimics a public cloud, so IF the public cloud makes sense in terms of security and economics in the future, they can shift there.
Reply  |  Post Message  |  Messages List  |  Start a Board

GE has a lot of incentive, unlike the vendors, to measure and report that data (internally) accurately. Most companies have learned from how bad their cost baselines were when they started down the road to virtualization ands hybrid cloud. Most people struggled to prove ROI becuase the "before" numbers were so questionable. I don't think IT wants to be in that spot again.
Reply  |  Post Message  |  Messages List  |  Start a Board

I think we tend to forget how relatively new the idea of running enterprise-class tech in the cloud really is. It'll take another couple of years to fully shake out the true numbers -- that is, IF the companies doing it track the right metrics and report on them objectively. Those are big "ifs."
Reply  |  Post Message  |  Messages List  |  Start a Board

So interesting to contrast the approaches of GE, with all its legacy apps, and Airbnb, with less baggage in tow. Interesting that GE will collect its own data for that "world metric." I supsect it will be worth the wait.
Reply  |  Post Message  |  Messages List  |  Start a Board
InformationWeek Is Getting an Upgrade!