The Future of Edge Computing: Not Just for IoT - InformationWeek

With the continuing avalanche of computing demand and data moving compute and data closer to the user is now a necessity.

What is edge computing, and why are we having this discourse in the first place? For that, we need to first take a look at where cloud and SaaS are going.

Modern SaaS and the cloud need better infrastructure.Modern SaaS applications, delivered by the cloud, are maturing to become massively distributed and tend to run true microservices decoupled from the underlying public cloud infrastructure. In many cases, even databases are being deployed in a distributed fashion. Interestingly, state is also being also distributed.

One big reason the cloud has seen massive adoption with enterprises and end-users is that the overall experience approximates that of a local compute resource, while delivering on the instantly available, pay-as-you-go promise that launched the cloud era. But we are beginning to see this “local compute” construct break down as apps are getting distributed across multiple regions and multiple cloud providers. This app distribution exercise is forcing developers to rethink high-availability and security strategies across all of their points of presence in the cloud. Plus, with apps consuming and generating massive amounts of data, developers have to investigate new ways to process these sizeable and potentially distributed data streams to create value.

The rise in dynamic content leveraged by apps to deliver superior end-user experiences is resulting in a distribution bottleneck. Traditional content delivery networks are unable to meaningfully add value to dynamic content, particularly when such content requires near real-time processing before being served to the end-user. Because developers have some level of compute privileges on the endpoints (e.g. in the browser context or within the mobile app), frameworks are being created to push more logic to endpoints. This type of technique works in some cases, but breaks down when it comes to VR/AR use cases, where the compute required to properly render experiences is much higher than is available on battery-powered devices.

The rise of edge computing

Edge computing, or simply the "edge", can provide significantly improved throughput, better performance and real-time experience by moving both computing and data closer to the user, and by personalizing the processing that needs to happen for each user. Here are a few examples:

Many industry analysts and technology pundits have been focusing on IoT as the primary driver for edge computing. This makes a lot of sense since billions of things will need to interact with a nearby edge compute resource. But when you consider that a ‘thing’ isn’t just a sensor, but could be a car or a drone or even a mobile phone, it becomes clear why we must think way beyond IoT when it comes to the edge.

With the ensuing data avalanche -- predictions are that the global datasphere is expected to grow 10x to 163 Zettabytes by 2025 -- moving compute and data closer to the user is now a necessity. This, in turn, will lead to many different edge computing "platforms"; the wireless edge, mobile edge, building edge. And yes, the IoT edge as well. 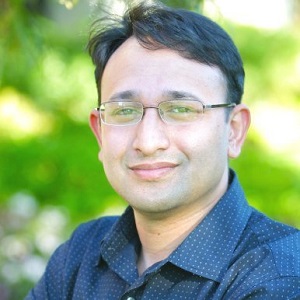 As VP of Platform Engineering for Intuit, Debashis Saha leads the engineering teams responsible for the platform, developer and application services that enable developers to be productive and innovate for our customers. Prior to this, he was the Executive VP and CTO for Jiff, Inc.; and VP of Commerce Platform Infrastructure at eBay, where he led engineering teams.

The InformationWeek community brings together IT practitioners and industry experts with IT advice, education, and opinions. We strive to highlight technology executives and subject matter experts and use their knowledge and experiences to help our audience of IT ... View Full Bio
We welcome your comments on this topic on our social media channels, or [contact us directly] with questions about the site.
Comment  |
Email This  |
Print  |
RSS
More Insights
Webcasts
Strategies for Success with Digital Transformation
ROI and Beyond for the Cloud
More Webcasts
White Papers
2020 Threat Hunting Report
The Network for Whatever's Next; A CxO Guide
More White Papers
Reports
The State of Threat Detection and Response
2020 State of DevOps Report
More Reports