This $299 Robot Can Keep Your House Safe From Intruders - InformationWeek

50%
Tweet
At CES, Robotex showed off its latest robot, made with BYOD in mind. This watered-down consumer robot is significantly cheaper than the line of robots Robotex sells to police departments, the military, and corporations. 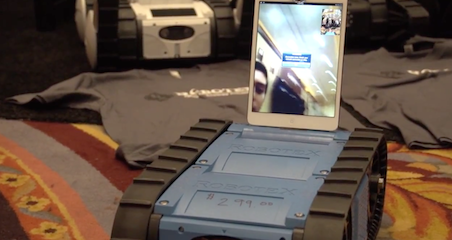 Nathan Gettings founded Robotex in 2007 and has created a line of robust robots with a team that includes the founders of PayPal and researchers from Stanford's robotics lab. The robots that the company displayed at CES included higher end robots that cops, the military, and corporations use to detect physical, chemical, and security threats. However, the latest line of robots is a BYOD robot, which is cheaper and can be controlled by a smartphone.

The new robot only costs $299. Consumers and small businesses who want home security can stick their iPad on the robot and use another phone to control the robot. The iPad on the robot directly controls it and accepts the commands from the remote iPhone.

Here is a video of the robots that were on display at CES:

We welcome your comments on this topic on our social media channels, or [contact us directly] with questions about the site.
Comment  |
Email This  |
Print  |
RSS
More Insights
Webcasts
Building an Incident Readiness and Response Playbook
Linking, Orchestrating, and Managing Your Enterprise Security Systems
More Webcasts
White Papers
NetFlow vs Packet Data
Definitive Guide to Securing DevOps
More White Papers
Reports
Can You Spare 10-12 Mins to Help Us Out with a Survey on Tech Trends?
Got 7 Minutes? Dark Reading Needs Your Help With Our Survey on Incident Response
More Reports