Drip some ink on a piece of fabric and watch what happens. Depending on the type of fabric, the blot spreads at different speeds along the warp and woof. The pattern that appears reveals as much about the fabric as it does about the ink. What does this have to do with social media? Here is a picture of a chain email diffusing through the social fabric, created by Cornell researcher Jon Kleinberg (picture taken from a Cornell University news article). 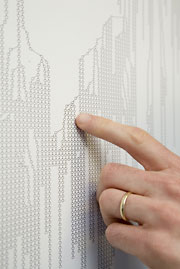 As I write, a Presidential news conference is going on, a broadcast event that I, like many of you, would have treated as 'unmissable' 10 years ago. Yet, today, I am happy to keep twhirl in my peripheral vision, trusting that if anything truly important is said, tweets or emails will come my way. I have let a vast, trusted crowdsourced filter descend over my eyes. My changed behavior is just one symptom of the waning of broadcasting and the waxing of diffusecasting (I hereby claim credit for the term) as the central process in mass communications. Virality and word-of-mouth are just surface characteristics. Here is a deeper X-Ray view. Mass persuaders, read this if you value your future in your profession.Broadcasting vs. Diffusecasting in HistoryLet's get one thing out of the way: word-of-mouth, viral memes and 1:1 influence are not unique to our age. Neither is it merely a matter of increased speed and degree. By way of proof, consider two pieces of evidence.Exhibit A: Viral diffusion is not new. Innovations, historically, have mostly spread by diffusion rather than by broadcast. There are hundreds of examples of innovations diffusing through an economy as fast as communication allowed. Students of innovation will be familiar with the Plank road, a flawed innovation that spread like wildfire in the 1840s. Back then, communication was expensive enough that only high-value news could go viral (like the idea of the Plank road, or news of gold in California), but the dynamics were the same.Exhibit B: Word-of-mouth is also not new. Consider this excerpt from William Whyte's Organization Man (fast becoming my management bible, easily displacing Drucker's writings), about how the close-knit suburban word-of-mouth networks were eroding marketers' influence:

In this process, merchanidsers have been comparatively passive. In the check I made of air-conditioner ownership in Philadelphia, I found only two cases where the original suggestion to buy had been made by a salesman; in almost all cases the initiative in the purchase had been taken by the consumer himself. To a surprising degree, retailers -- and most manufacturers, for that matter -- fail to appreciate the power of these word-of-mouth networks. Few tend to use "outside" salesmen to speed up the process, and those who do tend to have the salesmen scatter their calls over a wide area rather than work on natural neighborhood groupings... [a footnote continues] Many manufacturers talk about the cut-price problem as if it were due largely to the machinations of discount houses...What has been happening is that the consumer has been taking over part of the selling burden historically alloted to the retailer...The real selling job, in short, is done before the customer comes into the store. Guided by the group, the customer already has determined almost everything about the purchase -- including the fact that he will make it-- except the price and a few minor options; he is earning the price cut, and whether manufacturers like it or not, he is going to get it.

This surprisingly modern analysis, which could apply to IKEA, remember, was written in the 195os, when TV was in its infancy. Howard Armstrong, the iconoclastic inventor of FM radio, had just committed suicide (1954) after losing his legal battles with RCA. Brownie Wise was just inventing the Tupperware party. Whyte describes how the minority of smart WOM marketers operated back then:

With mingled admiration and horror, I heard a door-to-door selling expert explain how a smart merchandiser could exploit the group contagion. First, he said, he'd make a special effort, even if it involved a slight loss, to place air conditioners in the key homes in the neighborhood. Then, after the rest had succummed, he'd leave them alone for a while. Just about the time they would be feeling guilty that there wasn't a conditioner in the childern's room, he would return to trigger the next round of purchases. "All you do now," he said, "is pull the trap. Here's the way I would do it. I'd go in to 'check' the first conditioner, and while I was about it I'd mention to the couple that my wife and I had just bought a second conditioner for the little ones. I'd pause and let that hang in the air for a while. Then, very quitely, I'd say, 'You know, Mr. and Mrs. Jones, now my wife and I really sleep nights.'"

Back Issues | Must Reads
White Papers
Securing IT & OT in Industrial Environments
Ransomware Response Report: Trends & Outlook
Get The Key to Cloud Success
WhatWorks in SOC/NOC Integration: Improving Time to Detect, Respond and Contain with ExtraHop Reveal(x)
Better Security Awareness: The Devil is in 5 Details