Verizon's LTE network is available in more markets and has a better reliability rate, however, according to findings by independent analytics firm Root Metrics.
Esther Shein
Contributor
March 15, 2013

AT&T has the fastest 4G network among the top four U.S. carriers, according to the latest report from Root Metrics, an independent, third-party mobile analytics company. 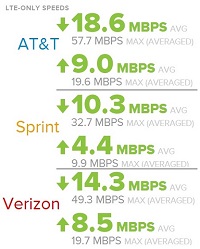 Although AT&T does not have the largest 4G LTE network — Verizon's LTE network was available in 77 markets tested while AT&T's was available in just 47 — the findings did not come as a total surprise. "We saw AT&T's speeds picking up considerably as 2012 advanced, with some extremely fast results in several of our RootScore Reports," so its performance in LTE study wasn't an anomaly, says Bill Moore, CEO of RootMetrics. He adds, though, that "What remains unclear at this point, though, is whether AT&T's edge in LTE speed is a result of having a newer, and therefore potentially less congested network, or an outgrowth of different implementations of LTE by the carriers. We'll be retesting markets throughout 2013 and are interested to see how the race might change as the carriers' networks continue to mature."

Sprint came in third place with an average of 10.3Mbps for LTE downloads and 4.4Mbps for LTE uploads. Its maximum average speed was 32.7Mbps and it had a maximum upload speed of 9.9Mbps, according to the report. Moore says its speeds were a "pleasant surprise," since they were actually faster than what Sprint had advertised on its website. "That bodes well for consumers looking for another LTE option moving forward," he notes.

T-Mobile continued its trend of strong download speeds, even without LTE available in 2012, the testing indicated.

Even though AT&T outshone Verizon in speed testing, Moore notes that the latter's "consistency at delivering LTE service stood out as a highlight. We accessed their LTE network in every market we tested, and our crowdsourced results show that consumers are also finding Verizon's LTE in more places than they are with the other carriers."

And while T-Mobile does not offer 4G LTE coverage, Moore says the FCC's decision earlier this week to approve the carrier's merger with MetroPCS gives it "a ready-made LTE footprint and additional spectrum it can use to expand its LTE capacity" in large markets. "A combination with MetroPCS potentially gives T-Mobile not only a bigger consumer base but also more marketing clout, which could in turn put more pricing pressure on the other LTE carriers."

In terms of what consumers can expect from the carriers this year, Moore predicts that Sprint, after spending 2012 prepping its network, will have a significant LTE rollout in 2013. While noting that Sprint is also in the center of complicated potential mergers with Softbank and Clearwire, which could muddy the waters, he says "what is clear is that Sprint seems poised to become a more aggressive competitor and the mobile landscape could shift significantly."

T-Mobile, meanwhile, is also preparing to launch LTE, with its first market most likely coming live very soon, Moore says. An official LTE rollout, combined with the spectrum advantages and consumer base emerging from its acquisition of MetroPCS, he says, will give T-Mobile an important footing moving forward as well.

"All of this is good news for consumers," Moore says. "There should be more options to choose from if you are looking for fast LTE service and there could potentially be increased competition between the carriers, which could also lead to benefits for the consumer."