The E6B flight computer was introduced to the US Army in 1940. Few devices have been around this long, have had cameo appearances in Star Trek, and remain in use today. We think that's worth celebrating.

Several years ago I had the opportunity to realize one of my lifelong dreams: learning to fly.

At the time, I was living in the Tampa Bay area, which has several small airports and flight schools. After shopping around for a good place to start, I enrolled in a program at Albert Whitted Airport (KSPG), in St. Petersburg, Fla.

During my first ground-school session, the flight instructor introduced me to a curious device. It was a sort of slide rule made out of cardboard, with a round clock-like bezel full of numbers. He called it the E6B Flight Computer. 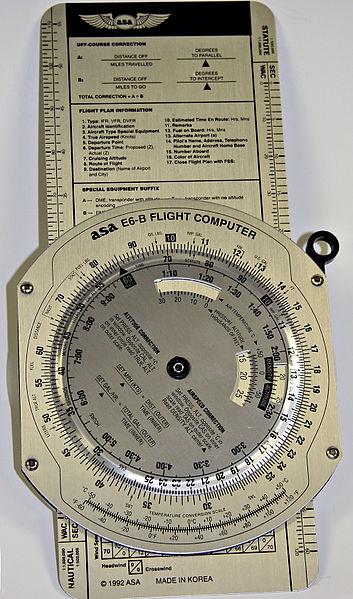 Until that moment, I thought the word computer only applied to electronic devices that performed calculations. As an electronics engineer, I had used "computers" most of my adult life, and that funny-looking cardboard device was a combination of slide rule and calculation wheel.

The E6B was the result of several years of development by US Naval Lt. Philip Dalton in the late 1930s. When the design was finalized, the device was introduced to the Army in 1940. After the attack on Pearl Harbor, the US Army Air Forces placed its first large order. The E6B was widely used during World War II, with more than 400,000 units built.

[Those were the days, my friends. Read 11 Things Computer Users Will Never Experience Again.]

A flight computer had been developed earlier by Siegfried Knemeyer, a German aeronautical engineer and WWII pilot. However, the E6B is considered the definitive flight computing device.

So, my shopping list to start flight training consisted of the latest FAA rules, a decent aviation headset, a sectional chart, and an E6B Flight Computer.

Over the next six months I familiarized myself with the E6B. The computer is fairly easy to use and allows you to make most of the calculations necessary for flight planning without the need for additional devices.

Later, when I took the required FAA written exam, the only tools allowed during the test were a basic electronic calculator (one that cannot be programmed) and the E6B.

The current E6B looks almost exactly the same as the first one manufactured 75 years ago. The only difference is that lighter materials, such as cardboard, aluminum, and plastic, are now used in place of the original steel.

The front of the E6B features a logarithmic slide rule, which performs basic multiplication and division. The "whiz wheel" performs useful conversions between different units: gallons, miles, kilometers, pounds, minutes, seconds, etc. If you need to calculate the weight of a certain amount of fuel -- for weight and balance -- you simply position the wheel at the exact amount and look at the corresponding value. The front also contains windows for variations when converting calibrated airspeed to true airspeed, or indicated altitude to true altitude.

The back features another slide rule and wheel designed for computing ground speed and wind correction angle. It provides a graphic method of solving problems in trigonometry and displaying the answers in an accessible form.

The basic calculations of the E6B "whiz wheel" are featured on many devices, including some "aviator" watches, such as the Citizen Skyhawk and the Breitling Navitimer. Many E6B emulators are featured on the Internet, and popular apps are available for iPhone, iPad, and Android devices.

Here's an example of an E6B emulator on the iPad:

If science fiction is any indication, the E6B could be around well into the 23rd century. In the Star Trek episode "The Naked Time," Mr. Spock uses an E-6B to calculate the time of impact between the Enterprise and a planet. In the episodes "Mudd's Women" and "Who Mourns for Adonais?" he is again seen holding an E6B.

The E6B is worth celebrating. Few devices have been around this long and are still in use today, and most pilots keep their original E6Bs as a souvenir of flight training.

Have you ever used an E6B? If so, we want to hear all about your experiences in the comments section below.

Pablo Valerio has been in the IT industry for 25+ years, mostly working for American companies in Europe. Over the years he has developed channels, established operations, and served as European general manager for several companies. While primarily based in Spain, he has ... View Full Bio
We welcome your comments on this topic on our social media channels, or [contact us directly] with questions about the site.
Comment  |
Email This  |
Print  |
RSS
More Insights
Webcasts
Ten Keys to Better Security Data Analysis
Nip Ransomware in the FUD: Detecting Attacks Pre-Encryption
More Webcasts
White Papers
Sunburst: Impact and Timeline
Understanding Credential Abuse Attacks: A Real-World Example
More White Papers
Reports
How IT Security Organizations are Attacking the Cybersecurity Problem
2020 State of Cybersecurity Operations and Incident Response
More Reports

@Kenp166: Thanks for adding this. I didn't know this. Maybe some of these organic computers are still alive. Eds: It'll be worth capturing their thoughts on the evolution of computers and computing and how this could be different.
Reply  |  Post Message  |  Messages List  |  Start a Board

I think the beauty lies in the facts you mentioned - that's why it's so unique here. As long as it can still be used without low efficiency and problem, it can even live longer.
Reply  |  Post Message  |  Messages List  |  Start a Board

The original "computer" was a human employeed to make calculation for scientists.   The first computers were organic. :)
Reply  |  Post Message  |  Messages List  |  Start a Board

At the same time the E6B was invented there were other computers at work. Scores of women used to sit in front of 10 key adding machines working on various problems, e.g., ballistics and air frame design. These women were called computers into the mid 1950's.
Reply  |  Post Message  |  Messages List  |  Start a Board

"Am I the only one finding it odd to call it a computer? Or did some brilliant marketeer invented a beautiful label?"

@nasimson: Calculators have always been considered as the earliest form of computers and the first form of calculator ever developed was the Abacus which did not have any form of electronics or sillicon technology. It was a pure mechanical device and much less sophisticated than the E6B.
Reply  |  Post Message  |  Messages List  |  Start a Board

"My flight instructors made me use the E6-B for all the flight planning during my training, and they always pointed out that internet is not available everywhere and batteries die. But the E6-B is always there to help."

@Pablo: I think that's a good back up technology to have that can work without power. I wonder to what extent this can be used in terms of the computational capabilities. Something like this might be very handy to own for people traveling to places with no power such as mountain hiking. They may have certain needs which might be fulfilled through a device built on similar technology.
Reply  |  Post Message  |  Messages List  |  Start a Board

Our concept of "computer" was not the same 75 years ago. There was no silicon, nor semiconductors. But the E6-B performs complex calculations. It is truly a computer for flight planning, because it does compute!

Nowadays we are so used to complex software and ubiquitous connectivy that we forget that basic tools such as the E6-B can be lifesavers in some situations.

My flight instructors made me use the E6-B for all the flight planning during my training, and they always pointed out that internet is not available everywhere and batteries die. But the E6-B is always there to help.
Reply  |  Post Message  |  Messages List  |  Start a Board

E6B has shattered all my stereo types for a computer. Without Silicon, without semiconductor, without a power source, without a screen. Am I the only one finding it odd to call it a computer? Or did some brilliant marketeer invented a beautiful label?
Reply  |  Post Message  |  Messages List  |  Start a Board
Editors' Choice
Hot Topics