Smartphones On Drones Can Hack Your Wireless Printer - InformationWeek

People are often seen as the weak links in network security, but printers may offer another avenue of attack.

Researchers from iTrust, a cyber-security research center at Singapore University of Technology and Design, have used a drone carrying an Android smartphone to compromise a network through a connected WiFi-enabled printer.

Exploiting the erroneous assumption that printers can get by without wireless security, the researchers, including professor Yuval Elovici, Jinghui Toh, and Hatib Muhammad, created an Android app that can identify a printer's open wireless network. To get the phone with the attack app near enough to exploit the vulnerable printer, the researchers affixed the device to a drone.

The app was designed to hijack data. Print jobs sent to vulnerable printers ended up on the smartphone instead. The app then sent the captured files to the cloud via the smartphone's cellular connection and placed the files in the attacker's Dropbox folder. The app also has the ability to send captured print jobs back to the printer, in order not to arouse suspicion. 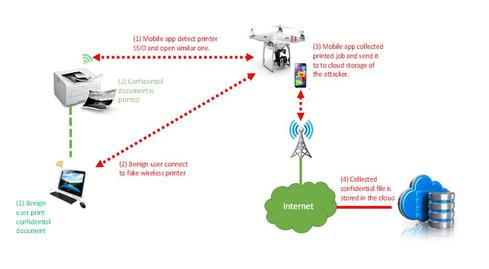 The use of a drone as a platform to attack networks may amplify concerns that drones need to be more tightly regulated. Worries about drones have prompted a backlash that threatens to slow their commercial deployment. On Tuesday the Federal Aviation Administration, still struggling to create rules to govern the use of drones, proposed a $1.9 million fine to punish drone startup SkyPan for allegedly conducting dozens of unauthorized flights over Chicago and New York.

But the attack vector needn't be airborne. The iTrust researchers also showed that their attack is feasible through a smartphone hidden in a robot vacuum cleaner. A smartphone running the attack software could just as easily be carried into a workplace, deliberately or unwittingly, by an employee, contractor, or visitor.

The researchers subsequently created a second app, called "Cybersecurity Patrol," to help IT managers mitigate this risk. Rather than hijacking print jobs, this app took a picture of the vulnerable printer and emailed it to the organization's CIO. It also sent remediation instructions to the printer.

Thomas Claburn has been writing about business and technology since 1996, for publications such as New Architect, PC Computing, InformationWeek, Salon, Wired, and Ziff Davis Smart Business. Before that, he worked in film and television, having earned a not particularly useful ... View Full Bio
We welcome your comments on this topic on our social media channels, or [contact us directly] with questions about the site.
Comment  |
Email This  |
Print  |
RSS
More Insights
Webcasts
Shaking Off Security Alert Fatigue: Tips for Taking Control
Preventing Credential Theft & Account Takeovers
More Webcasts
White Papers
Let's Talk: Why Language Matters in Cybersecurity
2019 Security Technology Sprawl Report
More White Papers
Reports
Apex Report: Global Cyber Infection
How Enterprises Are Developing and Maintaining Secure Applications
More Reports

Let's see - do we have all our hot buttons lined up ready to push?

Wait, it's not a toy helicopter, IT'S A DRONE!!!  Oh my god, a DRONE!!!  Fear! Fear! Fear!!!  It's someone from the government here to blast us to smithereens from the sky!!!  It's a perv with a flying camera here to look inside at me dressing!!!

So basically this is a wifi hack that someone happened to do with a phone instead something like a laptop, and they got it within range of a vulnerable printer by using a flying toy instead of just hiding outside the door.

It's like 1998 all over again, but instead of spreading irrational fears about the internet, nowadays you just add "with a drone" to any activity to ratchet up the hysteria factor.

Cool hack, but nothing we didn't know about before.
Reply  |  Post Message  |  Messages List  |  Start a Board

I think this is a very interesting and creative hack. Yes, it is a serious vulnerability, one that could be very effective when exploited. It further reinforces the notion that even though drones are a fun hobby, they probably aren't going to be something that the masses will have access to without serious regulation.
Reply  |  Post Message  |  Messages List  |  Start a Board
Editors' Choice
Hot Topics