The outermost planet in our solar system comes into breathtaking relief as NASA successfully completes a nine-year, 3-billion-mile expedition to Pluto. 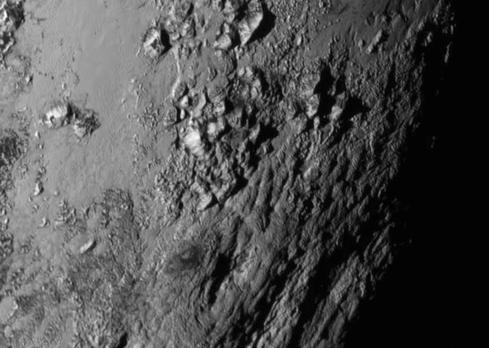 It's a historic week for astronomers -- and one could argue for all of humanity -- now that NASA's New Horizons spacecraft has successfully completed its flyby of the dwarf planet Pluto and beamed back mesmerizing images from the edge of our solar system.

After a nine-year journey, the grand-piano-sized probe swung by the planet this week at a distance of 7,800 miles, traveling at 31,000 miles an hour -- fast enough to cover 150 football fields per second.

In addition to photographing the ninth planet from the Sun, New Horizons will also snap shots of Pluto's five moons, including the abnormally large Charon.

(Interesting side note: Charon is known in Greek mythology as the ferryman of the dead, but the moniker was assigned by shortening the discoverer's wife name, Charlene.)

Little was known, and much remains to be discovered, about this lonely heavenly body of rock and ice, which swings around the sun in a strangely pronounced elliptical orbit.

New Horizons will take detailed measurements and images of Pluto and its moons. The spacecraft has already revealed that the planet is 50 miles wider than previously thought (or rather, dwarf planet, depending on who you ask, since Pluto was officially demoted half a decade ago).

NASA's no stranger to showing us sights that eclipse even the most fervid imaginations, from nebulae to galaxies and quasars, all viewed from a distance that makes Pluto seem like a next-door neighbor.

However, this mission brings the exploration of our solar neighborhood to a fitting, not to say patriotic, milestone -- the US is now the only nation to have visited every planet within it, in some cases multiple times.

But the larger spoils of this achievement go to those of us who have spied Saturn's rings through a telescope, to the introverted astronauts and science fiction aficionados pining for a trip to the stars, and to the stalwart supporters of Pluto's status as our ninth, and furthest, planet.