Nokia's Windows Phone lineup now covers all the bases, from the low-end Lumia 610 to the high-end Lumia 900.
Paul McDougall
Editor At Large, InformationWeek
May 25, 2012 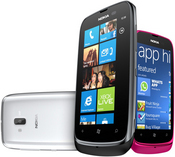 Lumina 610
(click image for larger view)
Nokia said that it will launch the Lumia 610, a Windows Phone-based device aimed at budget-minded buyers, in the U.K. next month. The company did not confirm a U.S. launch date, but it typically releases products into the American market several weeks after their European debut.

A company official said Nokia is positioning the Lumia 610 as a free, contract phone, that carries a minimal set up charge. Unlocked, it sells for 189 Euros, or about $238. It's available in cyan, black, and magenta.

The Lumia 610 won't appeal to power users, but it covers all the basics. It features a 3.7-inch WVGA touch screen with 800 x 480 resolution, a Qualcomm Snapdragon processor running at 800 MHz, and 8 GB of storage. The camera checks in at 5 MP, and there's cellular and Bluetooth connectivity.

The device lacks the horsepower to run advanced features like Skype video calling, but comes bundled with a wealth of messaging and social media apps designed to help users, most of whom will be on the younger side of Nokia's target audience, to keep in touch.

Facebook, Twitter, and LinkedIn are included, as is a direct connection to Microsoft's Xbox Live entertainment and gaming service, which requires a separate subscription. It also runs Microsoft Office apps.

With the 610 in the fold, Nokia's Windows Phone line now runs from the budget end to the high end, with the beefy Lumia 900, which hit the U.S. market last month. The question now is whether it's all enough to give the Windows Phone platform some traction.

To date, sales have been lackluster at best, despite a number of positive reviews from critics. As of March, Microsoft held just 3.9% of the U.S. mobile subscriber market, down from 4.7% in December, according to the latest data from ComScore.

Further complicating the sales picture is the fact that Microsoft has talked about releasing a new mobile OS, Windows Phone 8, later this year. Buyers may soon start holding out for that platform to arrive, given reports that Windows Phone 7 devices will not be upgradeable. Microsoft has yet to clarify the situation.