8 Key Differences Between Windows 8 And Windows RT
(click image for larger view and for slideshow)
It's an irony Karl Marx would have loved. In getting users hooked on apps, Apple may have become its own gravedigger--at least for the Mac--while opening a door for Microsoft.

The popularity of the iPhone, and now the iPad, has changed consumers' notions about how computing devices should look and feel. The browser-based PC experience is giving way to the snappy, appy world of smartphones, tablets, and other new devices.

It started with the iPhone. Users embraced the idea of built-for-purpose apps that, while doing only one or two things, did them well. They also liked the fact that apps, when well designed, are free of the generic chrome and clutter on traditional PC applications. A slick and simple design code makes apps ideal for touch. Users don't have to worry about being all thumbs because in most cases there aren't many buttons to press.

No surprise then that iPhone-style apps soon showed up on other platforms--most notably phones powered by Google's Android. It was no coincidence, as a federal jury recently found in the Apple vs. Samsung patent case. Now, the world beyond phones and tablets is getting appified as industrial designers and interface experts from other fields embrace the concept.

[ Windows 8 raises a lot of questions. Read Is Windows 8 Too Risky For IT? ]

Roku, which makes a little box that transforms a standard television into a smartTV, uses the app metaphor to serve up on-demand programming and services from Netflix, Amazon, Hulu, and others. And the display screens used by news networks like CNN and Fox are starting to look pretty appy. (Most of those displays are built by Microsoft's recently acquired Perceptive Pixel unit).

The app influence is even making its way to the browser. eBay's redesigned home page, with its big, blocky images, looks suspiciously app-like--an indication that retailers seeking a unified brand image across multiple devices will start with their apps and work backwards. Their Web presences are becoming adaptations of their apps, not vice versa.

Which brings us back to Apple and Microsoft. Windows 8 and OS X Mountain Lion are the newest PC operating systems from Redmond and Cupertino, respectively. But it's Microsoft's that represents a bold leap into the app world. Microsoft has drawn lots of fire recently for being late to almost every significant tech development of the past decade, including mobile, music, and search. 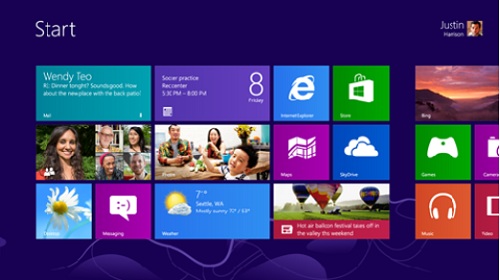 But when it comes to embracing what appears to be the latest trend, apps, it's suddenly ahead.

Microsoft has done significant work to make the overall Windows 8 environment distinctive. The Modern UI (formerly known as Metro) has a consistent look and feel that starts with the Live Tiles interface, runs through its own and third-party apps, and extends into cloud services, such as Microsoft Music, that are available on Xbox Live.

Windows 8 apps are true apps, as I would define the term: Full-screen, specialized purpose, touchable, and always connected. And they can run on PCs or tablets, and have close cousins that will run on Windows Phone 8, which also uses Modern UI. For functions not suitable for touch, Windows 8 can be used with traditional input tools. And the classic Explorer desktop can be accessed on Windows 8 Pro and Enterprise with a single click.

OSX Mountain Lion? Despite some new fit and finish, it remains a traditional PC operating system that is a bridge too far from Apple's iOS-based mobile products. It sticks with old-style applications (window-based, general purpose, manipulated through mouse and keyboard) and the browser as the gateway to information and services. 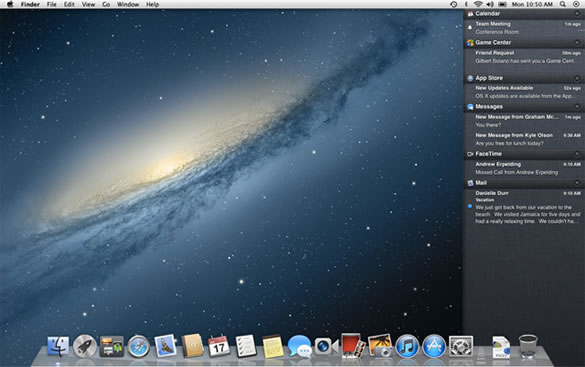 Mouse that bored: OS X Mountain Lion is slick, but point-and-click is getting long in the tooth.

It does support the Mac's Multi-Touch trackpad, but still requires a lot of pointing and clicking to get around. And, given the rather astounding fact that as of this writing there is no such thing as a touchable Mac, it does not offer a tactile interface. Thus, even apps available from the Mac App Store must be written to conform to a GUI style that is increasingly being seen as old school.

So in terms of being a modern computer operating system, Windows 8 leaves OS X Mountain Lion in the dust. And that has a couple of important implications. It may be enough to stop advances that Apple has been making in the desktop market off the back of the iPhone and the iPad.

The other is that it may be a threat to the iPhone and iPad themselves. Users who prefer app-centric computing, and that may already be the majority, now have an ecosystem that offers a consistent experience across all devices, whether phone, tablet, PCs, or even a TV or gaming console. That's the new Microsoft ecosystem, and its foundation is Windows 8. Suddenly, it's Apple's turn to catch up.