SEARCH
A minimum of 3 characters are required to be typed in the search bar in order to perform a search.
Announcements
Alert
Got some free time? Grow your knowledge from the comfort of your computer for FREE!
Alert
Are you looking to stay on top of IT trends? Check out our FREE webinars and virtual events!
Alert
Planning for 2023? Be sure to check out our upcoming in-person events!
Report
How does your salary stack up? 2022 IT Salary Survey Results Revealed
PreviousNext
Healthcare
3 MIN READ
News

It shows a hospital wringing value out of an electronic record system that took years to implement. One in a series of profiles of InformationWeek 500 innovators.
Marianne Kolbasuk McGee
Senior Writer, InformationWeek
September 07, 2011
When recruiting patients for clinical trials, medical researchers still typically get word out with billboards and newspaper ads. Some have tried Facebook lately. But those methods generally don't attract enough of the right patients, delaying research and sometimes leading to trial cancellations.

Penn Medicine, part of the University of Pennsylvania Health System, is trying something new: using the trove of data in electronic medical records to find clinical trial candidates and then alert those patients' doctors.

It's an example of how healthcare IT teams are working to wring value from the electronic record systems they've often spent years implementing. Earlier this year Penn Medicine completed a five-year project to roll out Epic e-records to its 1,800 employed physicians. "You often need an army to install EMR systems," says Michael Restuccia, CIO of the University of Pennsylvania Health System. "But once you finally have these systems in place, the amount of effort to get added value out of them with programs like this is comparatively little."

The provider's new clinical trial application, called Penn Research Trial Advisory, took several months to develop. It has piloted the app in its ob-gyn department, helping recruit 200 patients for infertility clinical trials. The test brought an 87% increase in the number of physician-referred patients for trials compared with the prior four-month period.

"The key is the much more targeted, available information sitting in the EMR that's now turned into a tremendous asset," says Brian Wells, Penn Medicine's associate CIO. Other departments plan to use the app for their own clinical trials.

In general, 85% to 95% of patient care is provided by ambulatory care clinicians--doctors in their offices or other locations outside in-patient hospital settings. Because they tend to have a more ongoing, trusting relationship with their patients, those docs are best positioned to recruit patients for clinical trials, Restuccia says. It's more likely than an ad to produce the right conditions, as well. 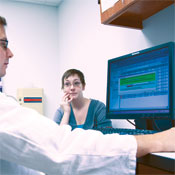 Once researchers identify the candidate criteria for a clinical research trial--diagnosis, sex, age, lab results, and medication--the criteria are embedded as an alert in the ambulatory EMR. In the infertility clinical trials, criteria include data such as codes for a diagnosis of polycystic ovaries.

If a patient matches the criteria, his or her doctor gets a message on the patient's EMR screen. Wells calls it a "gentle reminder" for the physician to mention the trial to an appropriate candidate. Physicians can also select a link to learn more about the trial before discussing it with their patients, and they can print out material for patients.

If the patient's interested, the physician can send an email from the EMR to someone trained to discuss the research. If the patient decides to participate, it's noted in the electronic chart so other physicians won't ask the patient to take part in other trials.

The app's development team included several clinicians and researchers and a small IT team--mostly just one Epic EMR team member, who programmed the rules. "The hardest part of the project was getting clinicians to agree on the rules so that you don't generate a lot of false positives," Wells says.