The U.S. Food and Drug Administration on Tuesday approved the first robotic exoskeleton to help people with lower body paralysis. Now instead of a wheelchair, some patients with spinal cord injuries will be able to walk with mechanical assistance from a device called ReWalk.

Christy Foreman, director of the FDA's Office of Device Evaluation, said in a statement that devices like ReWalk will help individuals with spinal cord injuries regain some mobility in their homes and their communities.

The ReWalk Personal Exoskeleton System is a motorized device worn on the legs and part of the torso to help those with lower-body paralysis sit, stand, and walk with the aid of an assistant -- falling remains a risk. Its motors provide movement support at the hips, knees, and ankles. The device relies on a tilt sensor and a backpack containing a computer and power supply. It is operated by a wrist-worn wireless remote control, and requires crutches for additional support. 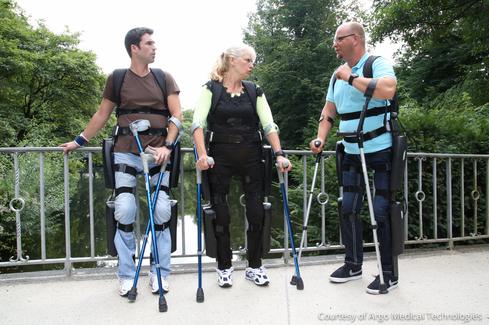 There are some limitations: ReWalk is not intended for sports or climbing stairs.

ReWalk Robotics, formerly Argo Medical Technologies, was founded in 2001 by Amit Goffer, who became a quadriplegic in 1997 after an ATV accident, to develop products to help people with spinal cord injuries.

[Just how much can advanced robots do these days? Read DARPA Robotics Challenge Gets Tougher.]

The company also makes a version of the product called ReWalk Rehabilitation system, which is intended to be used in a clinical setting. It provides a way to train and certify individuals (and their caregivers) so they can purchase the personal system.

"For the first time individuals with paraplegia will be able to take home this exoskeleton technology, use it every day, and maximize the physiological and psychological benefits we have observed in clinical trials," said Larry Jasinski, CEO of ReWalk Robotics, in a statement.

According to the U.S. Centers for Disease Control, approximately 200,000 people in the United States live with some form of spinal cord injury, many of whom must deal with full or partial paraplegia.

Beyond the psychological value of being freed from a wheelchair, ReWalk helps patients physically by improving cardiovascular health, burning fat and building muscle, and improving bowel function. ReWalk users report other benefits, such as improved pain management, and less need for medication and hospitalization.

The FDA is requiring ReWalk Robotics to collect data on adverse events arising from use of the ReWalk exoskeleton to evaluate whether its training regime is adequate.

Thomas Claburn has been writing about business and technology since 1996, for publications such as New Architect, PC Computing, InformationWeek, Salon, Wired, and Ziff Davis Smart Business. Before that, he worked in film and television, having earned a not particularly useful ... View Full Bio
We welcome your comments on this topic on our social media channels, or [contact us directly] with questions about the site.
Comment  |
Email This  |
Print  |
RSS
More Insights
Webcasts
How Secure is Your Azure Cloud Security Environment?
Building & Managing the Next-Gen SOC
More Webcasts
White Papers
Securing IT & OT in Industrial Environments
Ransomware Response Report: Trends & Outlook
More White Papers
Reports
Cyber AI: An Immune System for Cloud Security
Cyber AI: An Immune System for Email
More Reports

My name is Steven Tan. I have been doing a research on an exoskeleton prototype for quadriplegia patient. This prototype concept (Steelforce One) is to allow full paralyzed patient to move their body and do their daily work without having the need of help of others. They could walk, sit, sleep, move their arm to eat and etc on their own. This machine is potentially to be used as physiotherapy machine for people having trouble of movement in hospitals and patients who had stroke, spinal cord injuries or other sickness.


The system is currently built with embedded system and therefore we can add on as many functions and movement as it is developing further more. The prototype is also built with a computer and a software that allow the patient to type on the computer and interact with other people. Sensors will be added soon to allow better movement and control system.


This is the third prototype as I have been upgrading the function from time to time. I have been doing this research since 2010 and the structure design has been upgraded a lot since the beginning of the process.


I have also a video to show you about the project progress.
Link: http://www.youtube.com/watch?v=kqOrxIENE5U&feature=youtu.be

I read a couple years ago in an IEEE publication that there was a division in the research community between those repairing the nerve damage and those developing external aids like this. The former seemed to be getting more funding and media coverage (e.g., the Christopher & Dana Reeve Foundation) even though the latter held more promise for devices that could help people in the near term. It's a shame that silos like this develop.
Reply  |  Post Message  |  Messages List  |  Start a Board

This is very exciting news that, hopefully, will help improve the quality of life for paraplegics. I'd imagine that, as more people use the product, it'll get lighter and smaller and gain more capabilities (such as climbing stairs). How liberating this must be for people who had thought they would never walk again. I wonder whether private insurance will cover it?
Reply  |  Post Message  |  Messages List  |  Start a Board

And quite often, tests that work well in the lab on rats or other animals don't always translate into successes in humans.
Reply  |  Post Message  |  Messages List  |  Start a Board

I doubt it has been abandoned. It's just that news reports about success in the lab may take a decade or more to reach the market, at least where medical technology is concerned.
Reply  |  Post Message  |  Messages List  |  Start a Board

A few years ago, I read about an experiment in which a rat's severed spinal chord was induced to partially "re-splice " itself, enabling the animal to partially controll it's lower body. Not perfect, but a start. Why has this line of inquiry seemingly been abandoned?