IBM has spent four years and untold hundreds of millions of dollars developing Watson, a computer that can play Jeopardy. In fact, Watson answers questions so quickly and accurately that IBM challenged Jeopardy and two of the show's all-time champions to a match. Jeopardy's producers and the human contestants agreed. Taping took place January 14, and the three computer-vs.-human episodes will air February 14-16. Cynics may call it a publicity stunt, but the project has brought real advances in c
Doug Henschen
Executive Editor, Enterprise Apps
January 24, 2011 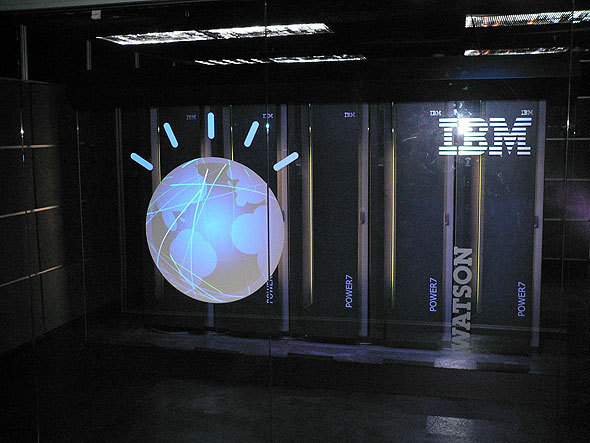 Meet Watson, a supercomputer designed to play Jeopardy. Watson is what IBM calls a "deep question and answer" application that runs on 10 racks of commercially available IBM Power 750 Servers. It's essentially a Jeopardy-optimized system on a massively parallel processing (MPP) platform that performs at 80 teraflops, or about 80 trillion operations per second. Watson has a 15-terabyte memory, but it's not a database. Rather, Watson was trained in advance on some 200 million pages of content -- on topics ranging from history and science to politics and pop culture. The resulting content store is based on IBM's (now open source) UIMA (Unstructured Information Management Architecture) with entities such as people, places, things, dates, and concepts meta-tagged for retrieval. When Watson is presented with a Jeopardy clue -- submitted as a text file when the clue is revealed -- search technology retrieves thousand of possible answers. Thousands of algorithms (the real "secret sauce") developed by IBM Research then score the possible answers and measure the confidence in best answer available. If confidence is high, Watson will ring in -- through a mechanical actuator much like the one human contestants use.