Innovation Mandate: An Interview With NASA's CTO For IT, Chris Kemp - InformationWeek

From a technology perspective, I see every new space craft and new mission as a new way to connect with the public. 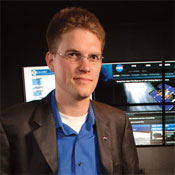 NASA's CTO For IT, Chris Kemp
Chris Kemp started his career 10 years ago in dot-com startups -- as chief architect of Classmates.com, then as CEO of property rental site Escapia.com -- before joining NASA as director of business development in 2006. Kemp was named CIO of NASA Ames Research Center in Mountain View, Calif., in 2007, and in May of last year was appointed to the new position of CTO for IT for the entire space agency.

At NASA Ames, Kemp helped broker a collaboration agreement with Google that involves a public-private partnership to bring NASA data and imagery to the Web, including high-res maps of the moon and Mars. Kemp is now spearheading NASA's move into cloud computing.

InformationWeek: You were an entrepreneur before you got to NASA. Do you still consider yourself one?

Kemp: Yes, and I try to bring an entrepreneurial push to the projects here at NASA. I try to build teams of high-caliber people and to protect them from the bureaucracy and make sure that they have the resources they need. I think it's been called an intrapreneur. I'm trying to replicate a lot of the things that work when starting a small business within the government.

InformationWeek: What's it like trying to attract talented people to NASA Ames?

Kemp: I would say that we are attracting a lot of talented people because of the projects that we're focused on. When I first took on the role as CIO, the organization was mostly focused on institutional projects -- e-mail, networks, IT security stuff for our center. One of the things that I'm trying to do is to really tackle some of the mission challenges at NASA, because the missions have tough problems to solve that are really kind of exciting. It makes it easier to recruit people if they're doing exciting work that's challenging. Our cloud computing project is an example of that, and our security operations center for the entire agency is an example. The more we get into supporting NASA mission projects, the easier it's going to be to attract talent.

InformationWeek: How did you make the jump from the world of startups and software development to NASA?

Kemp: It goes back to when I was studying computer engineering at the University of Alabama in Huntsville. I met up with a gentleman at the Marshall Space Flight Center working on a project there, and he introduced me to the guy who's now the director of NASA's Ames Research Center. Pete Worden, who's our director. He wanted to recruit a few disruptive, innovative, entrepreneurial people to tackle projects in the organization. I started working on strategic partnerships.

The first project I worked on was the Google-NASA space act agreement. NASA has authority to enter into unique public-private partnerships as long as taxpayers aren't footing the bill. So we are able to, at no cost to taxpayers, create Google Moon and Google Mars and make an incredible amount of NASA data accessible to hundreds of millions of people. With the click of a mouse, you can zoom in to all of the Mars data that we have and a lot of the moon data as well. That's how I got in. When the CIO job came along I threw my name in the hat because that was a real job that had a real organization behind it and opportunities to do some of this kind of work on a larger scale.

InformationWeek: Some people point to the offshoring of tech jobs or declining enrollment in STEM education as evidence that the U.S. tech industry is in decline or at risk of being in decline. What's your view?

Kemp: I do think that we have some challenges in that area. NASA finds it challenging to recruit really qualified people in part because we're in the middle of Silicon Valley and we're not able to pay competitive wages.

I was inspired as a kid to get into engineering because of NASA. NASA is one of the few federal agencies that has a mission that captures the imagination of the public and that kids can get excited about. I don't know of a single kid who doesn't love the idea of being an astronaut. Somewhere we lose that, and what we have to do is make sure that NASA's mission is an important one. By elevating that mission of exploration and discovery, we can continue to maintain that level of excitement and kids can stay in math and science and have those skills.

In Silicon Valley, the primary motivation to work for an Internet company is you can make a bunch of money. That's unfortunate because there are other things that are important in this world, like the planet itself. If there was more focus on NASA's mission as it relates to our planet and to the basic human desire to explore, if that were more baked into our culture, we would find people were getting into science and technology and engineering because they were really interested in that voyage of discovery.

InformationWeek's Series On U.S. Tech Competitiveness
InformationWeek: NASA has long been a place where innovation does take place in this country.

Kemp: Yes, that's very fair. There have been periods when NASA has been extremely successful at capturing people's imagination, and a lot of it relates to the emphasis that's placed on that mission. There have been times where that emphasis has been greater than others. I think it's a particularly important time now that there be an emphasis on NASA's unique ability to inspire the next generation of scientists and engineers and explorers.