Innovation Mandate: Patrick Byrne Lays It On The Line - InformationWeek

Our schools are awful and our financial markets are corrupt, insists Overstock.com's outspoken CEO, so no wonder that U.S. technology innovation is in jeopardy.

Overstock.com's chairman and CEO, Patrick M. Byrne, is grounded in the technology, but he's no geek. With a varied business and academic background, Byrne is an outspoken advocate of both school choice and capital market reform. He has founded 19 schools internationally and serves as chairman of the Friedman Foundation for Educational Choice. And when it comes to capital markets, Byrne champions greater SEC oversight to curb securities manipulation, a position that has provoked the wrath of Wall Street.

Oh, and he holds some strong opinions about this country's ability to produce world-class innovators and innovations. Following are excerpts from a recent interview conducted by InformationWeek contributing editor Doug Henschen.

InformationWeek: Do you agree with the majority of respondents to a recent InformationWeek survey that the U.S. is losing its lead in IT?

Byrne: I would agree, and I'm really glad InformationWeek is asking because I've been giving speeches on this topic for several years. About 20 years ago I was involved in development economics [through PhD studies at Stamford University], and I came to the conclusion that academics were making it a lot more complicated than it had to be. Development really comes down to two issues: human capital development, meaning education, and capital markets, which is where you combine human capital with financial capital. Twenty years ago I was in Vietnam giving talks on that subject saying, "These are the two things you have to get right. If you get them right, development takes care of itself." 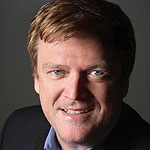 Patrick Byrne, CEO, Overstock.com
Here I am, 20 years later, and I'm in a battle with both Wall Street and the school system because I never thought the country I'd be worried about would be the United States. I think we have a terribly corrupt capital market, and people are nuts if they put a dollar into Wall Street. And our education system has become 21st to 25th out of 30 OECD countries, depending on what you measure in terms of international scores on math and science. Our long-term standard of living comes down to how well we educate our kids and whether we can fix our capital market. If we're educating our kids to the standard of Albania, there's no reason to believe we'll have a higher standard of living.

InformationWeek: Tell us a bit more about development economics and your background in the discipline.

Byrne: Development economics looks into what makes countries work. It's too long to get into in detail, but I've been all over the world teaching on the topic. I worked under Partha Dasgupta, who is one of the great theorists in development economics. He woke me up to the issues, and he's a real iconoclast. Twenty years ago, he was teaching that maybe the World Bank is doing more harm than good, and that really sounded like a crazy thing to say back then. Now a lot of people get it.

InformationWeek: So from a development economics perspective, what's your sense of the position of the U.S. today?

Byrne: This is a fairly broad analysis, but during World War II, every industrial country in the world was destroyed with the exception of Sweden and the United States. After World War II, we ran the tables on the rest of the world for 50 years. We just came to think that God is in heaven above, America is No. 1, and that's just the way it's supposed to be. We don't seem to grasp the significance, as a society, of what it means to have our kids coming out of high school educated to be 25th out of 30 industrialized countries. That should be sending up flares all over the country. I think we're just addicted to this worldview that came about from having two generations in which it was just automatic that we were No. 1. We don't get how far we've slipped.

We make it up, somewhat, in the university system. Ten years ago I would have said that system is the envy of the world, but even there we're slipping. The difference with higher education is that there's choice. You don't get assigned to a university based on your ZIP code. With K-12, we're organized on a Soviet model. That's why we're getting Soviet-style results. I was in Indianapolis early this year in a school district where only 27% of children graduate. We're creating a Third World country there in Indianapolis and in dozens of other cities.
We welcome your comments on this topic on our social media channels, or [contact us directly] with questions about the site.