Two distinct views of self-driving cars will be difficult to reconcile.

There are two distinct and not entirely compatible philosophies when it comes to building self-driving cars, and these two "platforms" put regulators and manufacturers in quite a quandary when it comes to making policy.

A new study by the Dutch Rathenau Instituut calls for action to merge those philosophies before it is too late. It is possible a platform war could leave consumers, governments, and the environment missing some of the major advantages of the self-driving car.

On the one hand, in Europe most companies (and government policy) have been dedicated to a cooperative system where cars communicate with each other and a "smart" infrastructure in order to navigate. Cars would have embedded communication and signal their intentions to other nearby cars and infrastructure fixtures such as traffic lights. Cars could then "platoon," or drive extremely close together, perhaps mere inches apart. The advantages to this system include enormous environmental benefits. It would significantly increase gas mileage by allowing cars to "draft" and reduce air friction. It would reduce the need to increase road size since cars could fit into tighter spaces and move more efficiently than currently. The EU sees this as a way to reduce the yearly 373 billion euro environmental impact of driving.

It also goes hand-in-hand with the extensive investment EU nations, especially the Netherlands, have put into smart road infrastructure to manage existing traffic issues. Roads in Europe are increasingly outfitted with cameras, smart signs, sensors, and "speed loops" in order to manage the traffic more intelligently.

The major disadvantage to the EU method is that it requires quite a lot of coordination between the government and the private sector, a single "language" that all the cars share, and an investment in smart infrastructure -- because if communications fail, the cars can't communicate or work.

On the other hand, you have the American viewpoint, which is dominated by Google, but also backed up by Uber and many US carmakers. The American philosophy is the robot car outfitted with sensors, cameras, GPS, and laser range-finders in order to drive without any help from a smart infrastructure or by communicating with any other car. The advantage to this is that it more easily integrates into an existing infrastructure, doesn't require competitors to agree to a single standard, and doesn't require any new regulation beyond permission to operate.

[What kind of songs would a robot car listen to during a road trip? Read Google Self-Driving Car: A Road Trip Playlist.]

The disadvantage is that while a robot car may not be far off, robot cars that can drive inches apart and gain environmental advantages would be. This is especially a shame in the US, where long-haul trucking is a major part of the economy, and waste and environmental impact could be improved with automated trucks in close convoys. Google cars need more space to operate. They don't readily communicate with the infrastructure, so the advantages in traffic reduction or fuel would be minimal. 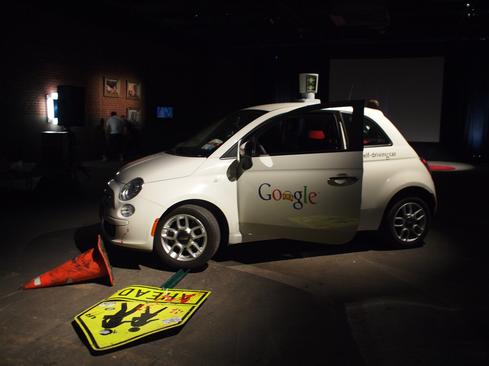 The study calls, of course, for a convergence of the two platforms to bring the best of both worlds to the systems. It sounds easy, but the very reasons why each continent has chosen its method is the very reason this gets hard.

If the US were to adopt a more cooperative viewpoint, it would require 50 states and the federal government to get on board to pay for a smarter infrastructure. They'd need to set a single communication standard, and they'd need to enable communications in far-flung rural parts of the country where the typical communication between these cars is spotty at best. Authorizing the money, making the giant investment, and settling on a regulatory structure for all of this are not going to be easy in today's American political climate.

On the other hand, Europeans see the Google style of car as a potential technological disruptor to their plans. The Netherlands and other countries in the EU had planned to slowly roll out greater and greater capabilities in self-driving cars as they invest in the infrastructure, starting with things like accident avoidance technology and smart traffic routing. But if they were to invest billions into it and Google were to disrupt it with a product that was ready first, the system might be pointless.

What we've got here is essentially an international platform war where the players aren't just companies but governments. If there is a war, there is no winner except the companies that win. If Google's platform wins, consumers, governments, and the environment lose out. If the EU wins, American infrastructure simply can't support it without a major effort that could delay self-driving cars for years or decades. Consumers and federal, state, and local governments in the US lose out.

Of course, the obvious answer is to say, "well, start with one and then combine them." The problem with that is that Google's method is decidedly faster, but not demonstrably better in the long run. If Google does win, there's little reason for governments (especially American governments) to hurry to add the "smart" infrastructure quickly. The EU's method makes Google's method obsolete if the main investment is made in the infrastructure, and they're unlikely to slow down just for that investment to be made.

Basically, the likely answer is that we'll see the two philosophies split on the two different continents and likely a war which is no-win for anyone. European policymakers will likely hedge their bets hurting their chances, and Google will likely forge ahead knowing that if it waits for US policymakers it will never get done. So, like in every war, the real casualty is the little guy caught in the crossfire.

David has been writing on business and technology for over 10 years and was most recently Managing Editor at Enterpriseefficiency.com. Before that he was an Assistant Editor at MIT Sloan Management Review, where he covered a wide range of business topics including IT, ... View Full Bio
We welcome your comments on this topic on our social media channels, or [contact us directly] with questions about the site.
Comment  |
Email This  |
Print  |
RSS
More Insights
Webcasts
How Elite Analyst Teams are Transforming Security with Cyber Reconnaissance
Making Cybersecurity Work in Small and Medium-Sized Businesses
More Webcasts
White Papers
Cyber Threats & Trends: Jan-June 2020
ROI Study: Economic Validation Report of the Anomali Threat Intelligence Platform
More White Papers
Reports
The ROI Of SD-WAN: Not Just A Numbers Game
How IT Security Organizations are Attacking the Cybersecurity Problem
More Reports

@kstaron- I generally agree with you, but it isn't quite as rare as we think. Something like the healthcare exvchanges mandated by Obamacare might be a good example. Some states struck out on the own. Some let the government build one. but generally speaking, they are compatabile and they do their job. We've criticized them for being a mess. But they happened. I'm guessing to a certian degree we can say the same thing about smart infrastructure. At the same time, if I were a betting man, i'd bet on Google having am autonomous car first.
Reply  |  Post Message  |  Messages List  |  Start a Board

Today's point there are differences culturally that fuel the independent decisions made by our state versus the European Union . I don't know that we will ever see a complete parlel with anything implemented in the EU and the US . That said I see the benefits to both systems. I also see that they are fundamentally based on the relationship between government and corporations in the US versus EU. We operate in a much more independent perspective separating corporations from government while there is a more holistic view in many European countries. Ultimately I am excited about the possibility of a self driving car but I don't know that I will see the reality in my lifetime .
Reply  |  Post Message  |  Messages List  |  Start a Board


If the US were to adopt a more cooperative viewpoint, it would require 50 states and the federal government to get on board to pay for a smarter infrastructure.


When have we gotten all 50 states to agree on anything? Much leass agree to pay for it? I can't even get street lights or sidewalks where I live because no one will cough up the funding. I don't see smart roads infrastructure coming anytime soon.

@jason you are right. The implications to making a car like this can be very deep. First of all money is not what you need but infrastructure is the main thing. If existing roads can be converted to robot driven car roads etc. And what about countries that are not third world can they have the same kind of technology?
Reply  |  Post Message  |  Messages List  |  Start a Board

@Jason Cook- Thanks, and also thanks for bringing up the security issue. It seems like on first blush the EU version of self-driving car is far more vulnerable. but at least you have a "schooling" kind of defense. the Google car idea sems harder to hack but you are 100% at the mercy of someone who targets you.
Reply  |  Post Message  |  Messages List  |  Start a Board


David, good thought provoking article that brings in the world view for self-driving cars.  I think like with everything, there will need to be global standards that are agreed or some type of convertor.  Think about power globally.  Now, most international travelers carry a power converter in their suitcase or the hotel will offer one.  Or think about wireless technology where TDMA, CDMA or GSM were fighting for global acceptance.  We now roam freely.

A bigger issue will be to agree on security up front on both philosophies.  If security is an afterthought, a bolt-on, then agreeing on a global standard will become even more important.  If either Europe of America consider security issues while they are developing and creating technologies for self-driving cars, then there is a shared risk that can be considered when developing standards.