Vint Cerf, recognized as one of the fathers of the Internet, is using social media to generate new ideas about how the Web should evolve.

Vint Cerf, one of the creators of the Internet, wants your help in re-thinking it for the next generation.

Cerf is starting a public project to solicit ideas on how to evolve the Internet in general, and specifically how to shape it to improve education and address the looming Digital Dark Age.

Given his pedigree, Cerf's project is curiously 19th century. He wants you to write a letter. And he's done so himself, on the mobile messaging network lettrs.

Why a letter? Cerf said in an interview with InformationWeek: "One of the things that has become very apparent to me is that letters in the past, because of the time delay for a letters to get back and forth, caused people to think fairly deeply about what they want to say. And they would couch their arguments to be understood even if [the recipient] wasn't there to ask questions."

He added, "Our modern communications tend to be very brief and rapid and don't involve thinking because we have another 100 emails to get through. The result is a lot of short, terse, not substantive communications."

[ Does anybody really know what time it is? Read NTP's Fate Hinges On Father Time. ]

Cerf has written an open letter (pictured below) in the hopes that people will respond in kind, with a long, thoughtful communication. He then hopes to take the best responses and feature them at Silicon Valley Comic Con, which is the brainchild of Steve Wozniak and Stan Lee and takes place March 18-20, 2016. Cerf will also share the results online, of course. 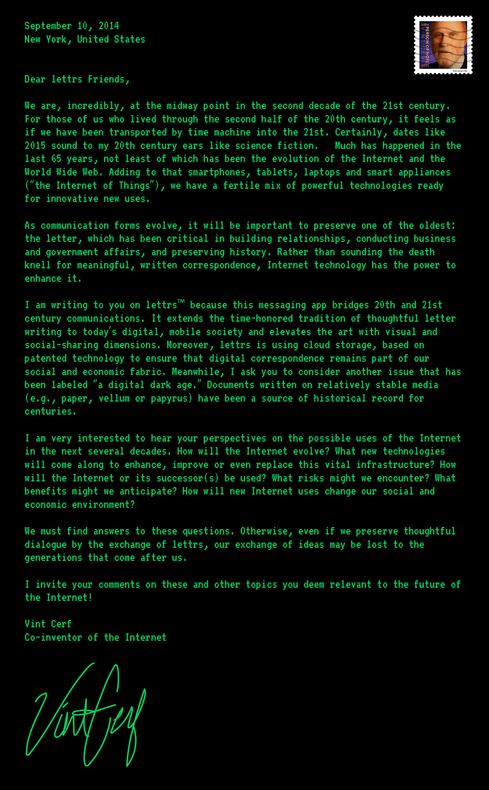 What are Cerf's biggest concerns? He has plenty, but the Digital Dark Age might be his biggest worry. If that phrase is new to you, pay attention here. What Cerf is referring to could well be the biggest problem facing IT in the next decade or two. The Digital Dark Age refers to the idea that much of our most basic communication (not to mention our important records) may not be available to historians (or even ourselves) in the future, because we will no longer have the ability to access the digital media on which it is saved.

Cerf cites Doris Kearns Goodwin's book Team of Rivals: The Political Genius of Abraham Lincoln as a perfect example of what might not be possible for historians of the next generation. Goodwin pieced together letters written by President Lincoln and his cabinet to write a book about how they interacted.

"In the case of Doris Kearns Goodwin, the letters were 140 years old, and I would guess that digital content that was created 10 years ago won't be accessible 10 years from now," said Cerf. "We have the media around, but you may not be able to read it."

Cerf had a much more mundane yet important example. He said he found a CD marked "Cerf Photo Archive 1." He couldn't remember what was on it or what device he had used to make it. He put it in several machines, all of which conveyed the message that the disc was blank. He knew he wouldn't have labelled a blank disk, and finally he found a machine that could read the disk. What would have happened had he waited a little longer to try to find the device to read the disk? Would the photos have been lost forever?

Imagine that scenario for all of our photos, all over the world. And all our videos. And all the records at all the corporations. And even the US government's National Archives. And ... well, you get the picture.

"The National Archives gets tons of information at the end of each administration, and it is getting harder and harder to preserve that because they have to deal with what software it was on, what created it, what it was created on, etc."

We're a generation creating more data and more records of our existence than any other, and yet we may save very little of it in the end. Cerf pointed to projects like Carnegie Mellon's Olive as part of the solution. Olive is working on ways to use old software to make archives more accessible and easy to run.

Even that solution may get complicated. According to Cerf, we need to sort out issues around intellectual property for software no longer in regular use but crucial to preserving data. Cerf also thinks we need to

@SaneIT- Well, he's worried about more than the Digital Dark Ages. i think he is just hoping to open a wider dialogue on what we should and can do with this thing.
Reply  |  Post Message  |  Messages List  |  Start a Board

@SaneIT- You are right to a certian extent. We're not all that worried about saving a hundred years of lost phone calls. there are many things we shouldn't be worried about saving from our current time. That said, I think Cerf's comment about "accidental" preservation is very on point. We don't want to rely on just what gets randomly saved. We need to make smart choices. Technology could allow us to make those choices.
Reply  |  Post Message  |  Messages List  |  Start a Board

@Tom- While i support Cerf's general plan, I'm sort of OK with it. If we leave behind too much, historians won't be able to read it all or make sense of it anyway. Letting a little slip away is natural and human and almost romantic. Frankly, I'm OK if everything i ever said on Facebook disappears. :)
Reply  |  Post Message  |  Messages List  |  Start a Board

@Charlie- Lincoln's Gettysburg address was very short for a political speech of the day. Maybe Lincoln would have also been the master of Twitter. :)
Reply  |  Post Message  |  Messages List  |  Start a Board

In "The Fiery Trial," historian Eric Foner describes how Lincoln wrote letters to the American people during the trying years of the Civil War, outlining his views on the Union and what to do about the slaves freed by Union armies and those still in thrall to their Southern masters. These letters were among his main public utterances and were the source of constant newspaper editorials and tavern debates. His thinking evolved step by step in these letters as the war progressed, as did that of the Union as a whole. Who knows where we would be today if he only used email or issued Tweets.

In Blade Runner, Roy Batty's musing on mortality sums up the fate of our electronic conversations: "All these moments will be lost in time. Like tears in rain."

Cerf is right that we should do more to preseve our digital past. But so much will disappear anyway.
Reply  |  Post Message  |  Messages List  |  Start a Board
InformationWeek Is Getting an Upgrade!