Startup Next Thing is turning to Kickstarter to tap funding for its pocket-sized computer -- CHIP -- which runs Google's Chrome browser, uses Linux, and costs just $9 to start.

Technology startup Next Thing is preparing to unleash a credit card-sized personal computer -- dubbed CHIP -- on the world, turning to the crowdfunding site Kickstarter to drum up financial support.

The project, which has already received close to $700,000 out of a $50,000 goal with 26 days to go, allows users to work in LibreOffice, a free and open source office suite developed by The Document Foundation that allows users to save documents to CHIP's onboard storage.

The basic CHIP costs just $9, with a battery, VGA and HDMI adapter, and mobile casing, which can eventually push the price up to just under $50.

CHIP is expected to ship in December of this year, with the full package with accessories available in May of next year.

While just getting started, the CHIP computer is entering a market that is now dominated by the likes of the Raspberry Pi. The second version of that DIY computer system now supports Microsoft Windows and is clearly steering toward a more business-friendly model.

Still, Next Thing believes it's onto something. 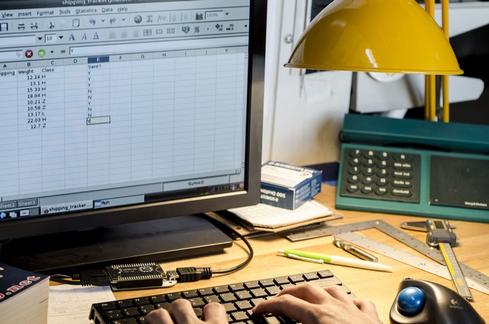 "The risks inherent in volume manufacturing are real, and we've taken every precaution to prepare for and actively address them," the Next Thing's Kickstarter page noted. "With the support of our manufacturing and distribution partners we are well equipped for the challenges ahead. We promise to keep our backers updated and informed about any issues that may arise."

The computer features a 1GHz processor, 512MB of random access memory (RAM) and 4GB of onboard storage. It offers connectivity through Bluetooth 4 and WiFi, which allows users to connect to the Web and add on a wireless keyboard or mouse.

CHIP also comes pre-loaded with Scratch, a user-friendly programming language that teaches the basics of programming by making stories, games, and animations.

On the display front, the computer lets users connect to any type of screen through CHIP's built-in composite output, or by adding a simple adapter for either VGA or HDMI.

It features an open source operating system, which comes preinstalled with dozens of applications, tools, and games. Web connectivity is provided by Google's Chromium browser.

In addition, CHIP can run a wide variety of free applications from the open-source community.

Keeping an eye on portability and mobility, the company also revealed PocketCHIP, which gives the computer a 4.3-inch, 470-by-272-pixel screen with resistive touch, a QWERTY keyboard, and a 5-hour battery, all tucked into case small enough to fit in a user's pocket.

CHIP also includes an integrated battery power circuit so that users can take a project outside without the need for an external power circuit -- users can just attach a 3.7v LiPo battery to the device and can go mobile.

"Most important, though, is that CHIP is built to be flexible," Next Thing's Kickstarter page adds:

Whether you're building yourself a wall clock that counts down time to the next bus at your stop, or setting up a network of hundreds of solar-powered air quality sensors for use in disaster relief, you need the same basic tools to start from: a processor, a way to exchange data, and a way to power everything. With CHIP, all the groundwork is laid, and the only question is what you'll do next.

[Read about what you can and can't do with Raspberry Pi.]

The company is entering a burgeoning market of pocket-sized computers. In addition to the Raspberry Pi, Intel is also muscling into the PC-on-a-stick market with the release of the Compute Stick, its version of a pocket PC that resembles a USB stick in size and weight.

The Asus Chromebit, which will hit stores this summer, includes 2GB of RAM and a 16GB SSD, along with a full-size USB 2.0 port for connecting accessories. It can also connect to the Web through Bluetooth 4.0 and 802.11ac WiFi.

Nathan Eddy is a freelance writer for InformationWeek. He has written for Popular Mechanics, Sales & Marketing Management Magazine, FierceMarkets, and CRN, among others. In 2012 he made his first documentary film, The Absent Column. He currently lives in Berlin. View Full Bio
We welcome your comments on this topic on our social media channels, or [contact us directly] with questions about the site.
Comment  |
Email This  |
Print  |
RSS
More Insights
Webcasts
How Elite Analyst Teams are Transforming Security with Cyber Reconnaissance
Building the SOC of the Future: Next-Generation Security Operations
More Webcasts
White Papers
Ahead of the Curve: Accelerate Cyber Response with DNS Insights
Transforming the Corporate WAN: Enterprise Network Insights
More White Papers
Reports
Evolution of Ransomware Gangs
Annual Global State of the WAN
More Reports

I love the idea of a computer under $10 even if you have to add things to it. But that RAM...I can't imagine how limited that would be. How does this really compare to Rasperry Pi? Is the cost low enough to induce sales even with a low RAM? I'm trying to figure out the demographic they are targeting and if that demographic can deal with a little tiny computer that can only do a little given the specs.
Reply  |  Post Message  |  Messages List  |  Start a Board

I have both the old and new model and you seem to refer to the older model. With that one I agree that using it as a desktop PC it just doesn't cut it. The new model has more RAM and a faster processor and the difference is incredible. So yes, Next Thing would be smarter to up the RAM on the CHIP. It will still land it at a lower cost than the current Pi.
Reply  |  Post Message  |  Messages List  |  Start a Board

But this project does not excite me. At all. It is debuting at specs which are, overall, inferior to the last generation Raspberry Pi. And the $9 number is misleading as by the time you add enough functionality to the device to reach the specs of the previoius-generation Pi, you are spending more than it would cost to buy a previous-generation Pi.

The only thing this may seem to have going for it over an old Pi is pre-installed software. But putting an image on an SD card for the Pi is not exactly difficult and the type of people that buy these devices are not going to feel like they have value added to the device for the preinstallation. I've been really excited at some of the Pi alternatives to come out--hummingboard, banana pi, cubie board, and also the Pi2 which trounces this proposed device in both specs and value. So, while users certainly could use more products like this to choose from, and greater control over small devices, I really cannot see much upside to this particular product outside of money for the developers for their kickstarter campaign. C'mon, guys, all you who are familiar with these devices know I'm right.
Reply  |  Post Message  |  Messages List  |  Start a Board

I'm not going to knock what they're achieving with a $9 computer in anyway- it's an impressive feat that is simply amazing.  That said, I've got a pi that runs at 900MhZ (over-clocked) and has 512MB RAM (similar specs to the CHIP).  They expect people to be able to use Libre Office and Chromium on this.  It's possible, but frankly for the performance of it I'd just stick to using a smartphone.  The CPU speed and specs aren't an issue, the RAM is.  When I go to open docs or the browser, I watch my RAM go from <12% used to 100% in about 3 seconds.

Again, what they've accomplished for the price point is all but miraculous and for the right uses this is definitely going to give the Pi a run for its money but, please, keep things in perspective for what you actually want to use it for.
Reply  |  Post Message  |  Messages List  |  Start a Board

I'm a huge fan of this sort of movement and everything that's going on in this space. CHIP looks really cool, the people behind it come off as very passionate and genuine in the Kickstarter video, and I'm sure I'll be picking up one (or five) for myself when it launches early next year. Much like Chromebooks and the like, the bet on cloud-and-web services to do a lot of the heavy lifting (I assume this is particularly what they have in mind when they claim 'lots of' gaming) is fairly convincing... it does beg the question of just how many cheap microcomputers I need, but then that just makes the price point all the smarter; for nine dollars, you can't possibly go wrong buying one, can you?

All that said, there were a couple of a caveats I noticed. Component as the standard video output seems like an odd decision (although, in a few use cases, it might be a welcome addition). Tacking on an HDMI adapter through the Kickstarter almost triples the price to $24. I also noticed CHIP only supports 802.11b/g/n for WiFi where, as you noted, competitors like the Chromebit use 802.11ac. 802.11ac features like MU-MIMO could be missed considering CHIP is advertised as being IoT-ready. One minor correction, too, Nathan - the package with all add-ons actually brings the cost up to $93 - the $50 version includes just the CHIP and the "pocketCHIP", not all the adapters and the extra battery. All of this is, no doubt, in an effort to make that $9 base price feasible, which I commend - it still makes me wonder about CHIP's ability to really compete with the Raspberry Pi, though.
Reply  |  Post Message  |  Messages List  |  Start a Board
Editors' Choice
Hot Topics