According to reports, some users have discovered a new feature in the official Twitter apps called "Nearby." Nearby is a separate timeline that displays tweets from people within a certain distance of you who have the location tagging option enabled. Users must have location tagging enabled in order to see the Nearby feed.

According to screen shots from the Wall Street Journal, the new timeline shows a map of your location at the top and a feed of tweets from people nearby -- whether you follow them or not -- below it. Users reportedly can manipulate the map to show tweets from other nearby locations.

If Twitter makes this feature a permanent fixture, it will be a more intuitive and accurate way to surface tweets based on location. Presently, users can search for location hashtags or browse trends based on location, but can't pinpoint conversations happening nearby. Such a feature could also mean more location-based advertising. 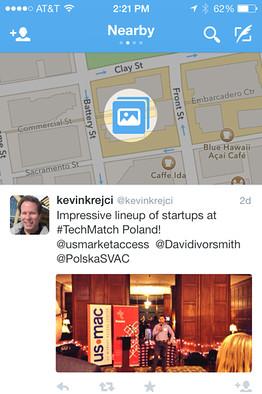 Although Nearby might be new, location tagging is not: Twitter launched it in 2010. Should the social network roll it out to everyone, it's unlikely to cause a stir among privacy advocates: The location-tagging feature is off by default and requires you to opt in.

Enabling this setting will append latitude and longitude coordinates to your tweet when you use the Twitter mobile app, or append a place such as a city or neighborhood if you are using Twitter.com or other clients that allow you to add a general location.

If you opt in, you can still choose not to share your location for individual tweets, depending on the application you use. If you have enabled this option and no longer want it, uncheck the box on your "Security and privacy" page, then click the "Delete all location information" button.

AllThingsD first reported in April that Twitter employees tested a similar feature in Boston, around the time of the marathon bombings. The feature reportedly came out of the company's "hack week."

Twitter has rolled out a number of features in the last few weeks. Most recently, it announced a mobile app redesign that supports sending and receiving photos in direct messages, helping it compete with overseas rivals Kakao, Sina Weibo and Line.

Last week, Twitter made news when it retracted changes to its blocking policy just hours after announcing them. Under the short-lived changes, blocked users were still able to retweet and favorite your posts. This meant that the only way to prevent someone from following you would be to change your account to private.