Your tablet battery can last more than the typical 8 to 10 hours if you follow these smart strategies for iPad, Android devices.
Jeff Bertolucci
Contributor
July 22, 2013 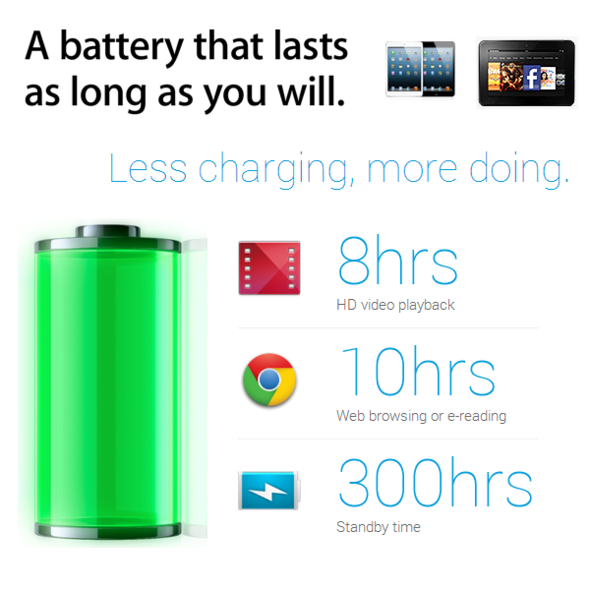 Ever watch a tablet teardown video? If so, you're aware that a battery takes up a lot of room. And that's a big reason why manufacturers are able to squeeze eight to 10 hours of battery life out of tablets these days. But guess what? You can do even better.

Of course, getting a tablet to last longer between charges takes a little effort on your part, as well as a willingness to accept a few connectivity and performance trade-offs, which we address in this slideshow.

Recent tablet market share numbers from research firm IDC show that Apple and Android dominate slate shipments, which is why our battery-saving tips focus on those two platforms. In the first quarter of 2013, the iPad accounted for just under 40% of all global tablet shipments, while Samsung's tablets accounted for nearly 18% of shipments. (Samsung sells mostly Android tablets, although it does offer Windows models too, such as the ATIV Tab 3.)

All-day battery life is one of the hallmarks of a successful tablet. The iPad more or less established this benchmark when it debuted in 2010, and Apple has managed to maintain this standard while boosting the iPad's capabilities in successive generations by adding faster processors, 4G LTE wireless, and the high-resolution Retina screen with 2,048 by 1,536 pixels. To reach its eight- to 10-hour target, Apple has boosted the capacity of the iPad's lithium-ion polymer battery, moving from a 25-watt-hour pack in the first-generation iPad to a 42.5-watt-hour pack in the latest, fourth-generation iPad.

Tablets -- including tablet-laptop hybrids -- that don't hit the all-day mark might have an increasingly tough time in the highly competitive tablet market. Microsoft's tepidly received Surface Pro, which runs Windows 8 on its power-hungry Intel Core i5 processor, lasts only four to five hours between charges, a shortcoming Microsoft will almost certainly correct in the second-generation model. One likely upgrade: the use of Intel's upcoming Bay Trail Atom processor, which promises improved power management and graphics performance in low-cost Windows 8 tablets.

What does the future hold? Well, perhaps a battery-less tablet that uses wireless charging, at least according to this GeekWire article on a recently published patent application, one listing Amazon CEO Jeff Bezos as one of two inventors.

Until then, we're stuck with the humble battery, warts and all. Explore our slideshow to find 10 ways to boost your tablet's battery life.