There's no iPhone 5 yet, but meet the iPhone 4S--including Siri, your new voice-activated personal assistant.
Thomas Claburn
Editor at Large, Enterprise Mobility
October 04, 2011
Leaving months of speculation unanswered, Apple on Tuesday did not introduce iPhone 5, the putative heir to the smartphone throne in a product line that has redefined the mobile and the computer industries.

Instead, the company unveiled iPhone 4S, a thorough revision of last year's model.

Whether or not Apple fans were disappointed, they still managed to overwhelm Apple's Web site. Apple.com was returning "Access Denied" errors after the conclusion of the company's media event on Tuesday.

In addition to showing off its latest iPhone model, Apple also: reviewed some of the highlights in iOS 5, the latest iteration of the company's mobile operating system; lowered the price on its iPod nano and its low-end iPod touch; expanded the available memory on its iPod touch and iPhone models to 64GB; and announced a launch date for its iCloud service.

Apple also lowered the price of its iPhone 3GS to free, which is more than it may seem given the cost of the required two-year contract.

The iPhone 4S costs $199 for the 16GB model, $299 for the 32GB model, and $399 for the 64GB model. It will be available from Apple's Web site and retail stores, AT&T, Sprint, Verizon Wireless, and authorized Apple resellers.

[ Adobe is emerging from the shadow cast over the company by former Apple CEO Steve Jobs. Find out more in Adobe Takes HTML5 To The Cloud. ]

iOS 5 will be available for download on Wednesday, October 12. 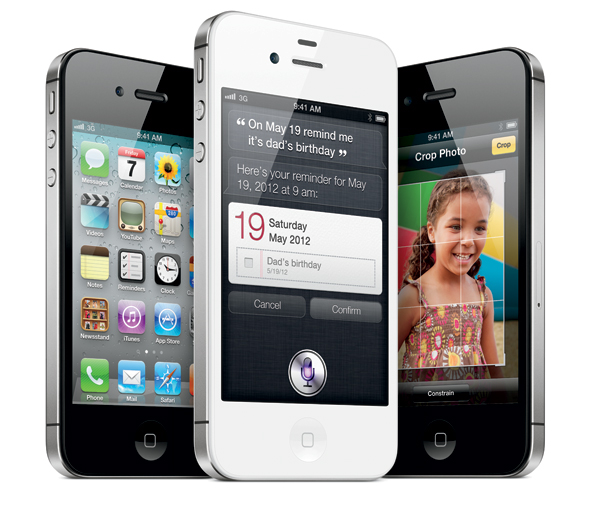 Apple also introduced a remarkable voice command system, based on the technology it acquired when it bought voice recognition company Siri last year.

Apple CEO Tim Cook, who took over leadership of the company when Steve Jobs resigned in August to become chairman of Apple's Board of Director, presided over the media event at the company's headquarters in Cupertino, Calif.

Prior to introducing Apple's latest phone, he reviewed the company's continuing growth, noting that company's installed base of Macintosh computers had reached 58 million, about twice what it was in 2008. He said that the Mac platform had grown 23% since last year, compared to 4% growth in the PC market, and in August represented 23% of computers sold.

The litany of positive figures continued, as if Apple has something to prove: 250 million iOS devices sold; 125% year-over-year growth for the iPhone, compared to 74% for other smartphones;over 300 million iPods sold; and 70% user satisfaction for the iPhone in a ChangeWave survey, compared to 49% for the second place finisher, HTC.

Even when Cook handed off to Apple SVP of iPhone software Scott Forstall, the parade of metrics continued: iOS accounts for 43% of the mobile operating system market (comScore figures), compared to 33% for Android, 17% for RIM, and 8% for the remainder of the field. Over 1 billion apps are downloaded every month.

Yes, Apple is a very successful company. But the question is: Do you want an iPhone 4S? Here are five key facts about the device:

1. Faster processor: The iPhone 4S features an Apple-designed dual-core A5 processor, which SVP of worldwide marketing Phil Schiller claims delivers up to 2x faster CPU performance and up to 7x faster graphics performance.

2. Dual networks: The iPhone 4S works on both GSM and CDMA carrier networks; the older model was one or the other, but not both.

3. Download speed:The iPhone 4S promises twice the download speed of the iPhone 4--14.4Mbps compared to 7.2. It supports HSDPA but not LTE.

4. Much-improved camera: The camera on the iPhone 4S is significantly improved--30% sharper, with an aperture of f/2.4, a third quicker to capture images, with an 8 megapixel sensor that takes 3264 by 2448 pixel pictures. It's also capable of HD 1080p video.

5. Voice-powered "assistant": Meet Siri, which plays a starring role on the iPhone 4S. The software describes itself as "a humble personal assistant," if you bother to ask. It allows the user to control phone functions through voice commands and even answers questions. For example, saying "Wake me up tomorrow at 6 AM" to Siri prompts the software to set the iPhone's alarm clock app. This technology looks both impressive and useful.

While many people no doubt are disappointed that there's no iPhone 5 yet, the hardware tends to be the least interesting thing about smartphones. The iPhone 4S works faster, has a better camera, and runs on both GSM and CDMA networks. Coupled with iOS 5, these features make the iPhone 4S compelling.