Apple iPhone 5 Vs. Samsung Galaxy S III: What We Know

How will Apple's new iPhone stack up to Samsung's premier smartphone? Here's a look at some key considerations.
Jeff Bertolucci
Contributor
July 26, 2012 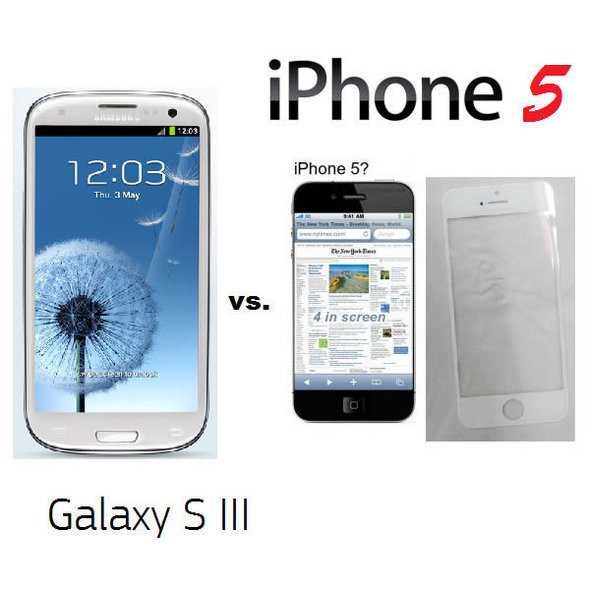 The two most talked-about smartphones today include one made by Samsung, and another that officially doesn't exist. That "other" phone, of course, is Apple's next-generation iPhone--or what many tech enthusiasts refer to as the "iPhone 5," even though the new model would be the sixth incarnation of Apple's handset since its debut in 2007.

The Samsung Galaxy S III, an Android device with a gigantic--well, gigantic for a smartphone--4.8-inch display, has proven a huge success since it began selling in Europe in May. (U.S. carriers received the phone in late June and early July.) J.K. Shin, Samsung's mobile boss, recently told the Yonhap News Agency that Galaxy S III sales had topped 10 million units. It's unclear, however, if Shin was referred to sales to consumers or shipments to wireless carriers.

Apple, by comparison, sold more than 26 million iPhones in the third quarter of 2012, up from 20.3 million in the same period a year ago. Impressive, certainly, but slightly below Wall Street's expectations, a missed goal that tech analysts and company executives alike attribute to consumers delaying their iPhone purchases until the next model arrives. Apple won't say, of course, but the new iPhone is rumored to debut in October, a year after the launch of the iPhone 4S.

As the iPhone unveiling approaches, more rumors are bubbling up about the phone's design. Based on what we've heard so far, the new model doesn't appear to be dramatically different than its predecessor, at least not on the outside. It's longer but not wider than the iPhone 4S, has a slightly larger 4-inch display, and includes a smaller, 19-pin Dock Connector that's sure to annoy longtime iPhone users, particularly when they discover their peripherals won't work with the new iPhone without a special adapter. Ah, progress.

So how does the new iPhone stack up against the Samsung Galaxy S III? Comparing a shipping phone with a rumored model is tricky business, of course, but we've sifted through the iPhone rumors to create a plausible spec sheet for Apple's next-gen device. A few key features, including 4G LTE wireless, the Siri voice assistant, and a faster (likely quad-core) processor are almost certainly going to be part of the new model. We've compared those specs, as well as other, more speculative aspects of the new iPhone, with the Galaxy S III's features.

Which phone is best? We'll have to wait until the next-gen iPhone ships to know for sure. But for the next best thing, click through the slideshow for a pre-launch comparison.