It's way too early to declare Windows and Surface failures in the market, although it would be foolish to expect it to obviate Windows 7 any time soon, especially in business and double-especially on desktops. In the meantime, its job is to recover market share for Microsoft that has been lost to Apple iPads and Android tablets, and there's reason to believe it's doing that.
Larry Seltzer
Contributor
November 23, 2012

Is Windows 8 a disappointment already?

It's hardly surprising that people would claim that, but is there anything to it? I have to think it's too soon to tell.

But there are reasons to believe that consumers are buying, or at least interested in, Windows 8 and Surface. Consider the graph below, which cites StatCounter data to show that Windows 8 is already being used more as a Web client than Android: 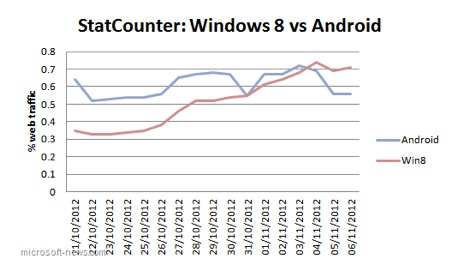 Windows 8 and Android traffic on the Web. source: StatCounter, via microsoft-news.com.

Now to me the striking part of this chart is that both products are less than 1% of overall traffic, and StatCounter doesn't get everything on the Web, but it's a plausibly accurate measure.

And there's no way to claim that people are unaware of Windows 8 and Surface, although they might be confused about the distinctions between them. Both have gotten extensive press attention and -- especially Surface -- advertising.

It's just one example but, for what it's worth, here are the "top searched [electronics] products on PriceGrabber.com and click-thrus to merchant sites" for November 16-22, 2012, starting with the most popular:

Wow, Surface is number one? In fact, it was number one on StatCounter's overall list, not just electronics. Instinctively I found this surprising, but maybe I shouldn't be. Like I said, Surface has been heavily publicized. That Dell Latitude ST tablet is a Windows 7 device, although it's probably upgradable.

At least as interesting as the Surface placement is where the Apple products are. True, the iPads are still on the top-searched list, but near the bottom, below several Android devices. And where's the iPad Mini?

Sales figures can be complicated and misleading. Very often when you see sales figures they are only through certain channels, such as retail only.

I haven't seen any sales numbers yet that I would trust. But I will make one observation: I expect Windows 7 sales to remain very strong, especially with businesses. It's been widely claimed already that Windows 8 is a poor match for a conventional desktop computer. I don't totally agree with this, but clearly there's a lot to it.

It's true of almost every Windows version that businesses take a long time to upgrade. The best example to the contrary is Windows 7, a highly-regarded version that replaced a long-incumbent version, Windows XP. Businesses are still deep into their plans for replacing Windows XP with Windows 7, so don't expect them to jump on the opportunity to make a change to something radically different when Windows 7 is available. So you can expect Windows 8 to be a mostly a consumer market phenomenon, although obviously many tablets with Windows 8 will be bought for business.

And I'll make a prediction: Expect a Windows 8.5 (or something like that) that has a desktop mode more like the Windows 7 desktop. Only then will business sales take off.

But in the meantime, If Microsoft loses Windows 8 sales to Windows 7, well, things could be a whole lot worse.