A Good Technology report reveals that enterprise companies are choosing Apples over Androids. On the flip side, Android activation is doubling in the enterprise.
Boonsri Dickinson
Associate Editor of BYTE
July 25, 2012

Android adoption has doubled in the enterprise, but the iPhone and iPad are still far ahead, according to Good Technology's Q2 2012 Device Activation Report. The iPhone 4S is still the top device with 30.8 percent of activations for the quarter.

The latest versions of the iPhone and iPad account for most of the activations between April 1 and June 30, 2012. In the tablet space, iPad is killing it, with 94.5 percent of tablet activations overall. 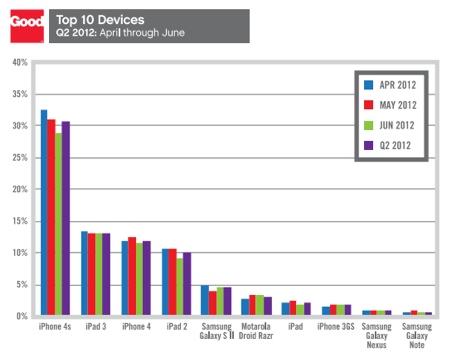 Windows Phone is basically not present in this study, but it's still early in the day for it. Things may well change after Windows 8 and Windows Phone 8 debut. (Note: Watch what BYTE thought about Windows 8 on the Samsung Slate).

Adoption of the iPhone, iPad, and Android devices is all about one thing: increasing mobility via mobile computing. BYOD and consumerization of IT are disrupting industries as diverse as government, manufacturing, and retail. Ever see a coffee shop that uses an iPad as a register? Or hear about an electronic manufacturing plant that uses tablets to collaborate with teams around the world?

"Our device activations report shows that more and more of our customers - across all industries - are really embracing mobility as a new strategy for boosting productivity and business insight," John Herrema, senior vice president of Corporate Strategy for Good Technology, said in a statement.

Enterprises aren't the only ones with a preference for Apple over Android. Another recent study shows how mobile developers prefer iOS over Android.