Mozilla's engineers have reworked Firefox for Android, transforming it from an also-ran into a compelling option for Android users.
Thomas Claburn
Editor at Large, Enterprise Mobility
June 26, 2012 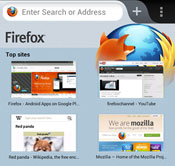 Mozilla released a re-engineered iteration of Firefox for Android, the mobile version of the company's widely used Web browser, Tuesday.

Mozilla has had a mobile flavor of Firefox since early 2010, when it introduced Firefox for Mobile on Nokia's Maemo platform. There was also Firefox 4 for Android and Maemo in October 2010, but it didn't perform as well as hoped.

Mozilla's Firefox has yet to have the impact on mobile devices that it had, and continues to have, on desktop computers. But Mozilla needs a hit to remain relevant on mobile.

Google is likely to announce the official release of Chrome for Android at the Google I/O developer conference this week. Google's entry into the desktop browser market in 2008 forced Mozilla to redouble its efforts to remain competitive, and Chrome for Android is doing the same thing in the mobile arena. To compete, Mozilla first has to show up, and that's where Firefox for Android comes in. If Firefox for Android fails to attract a significant number of users, Mozilla will have to rely on its upcoming Boot 2 Gecko Web phone platform to sustain its status as a leading player in the mobile market.

Fortunately for Mozilla, Firefox for Android has a lot to recommend it. Mozilla has dropped its XUL-based interface in favor of native Java widgets. The company's engineers have reworked Firefox for Android's rendering engine to take advantage of mobile phone GPUs. There's a new font inflation system that makes text easier to read. And Firefox for Android supports browser add-ons, like Adblock Plus and URL Fixer. Such niceties aren't allowed on iOS devices.

Firefox for Android also supports Adobe Flash content, another technology forbidden on iOS devices. While Flash support isn't necessary or desirable for many people, some users are sure to appreciate the convenience of being able to access Flash websites and videos. To add Flash, Android users may need to download it from the Google Play store.

What that means for the user is a much better browsing experience. Web page scrolling on Firefox for Android is fast and fluid.

Mozilla was the first browser maker to implement the Do Not Track privacy standard, and Firefox for Android is the first mobile browser to support it. Now we just need more websites and ad networks to follow the lead of companies like Twitter that have implemented support for Do Not Track headers.

Mozilla has worked hard to establish parity between its desktop and mobile versions of Firefox. And the Sync feature in Firefox for Android can help make the transition from desktop to mobile browsing more seamless. Firefox Sync allows you to synchronize your Web history, bookmarks, tabs, form data, and saved passwords across devices.

Other useful features include the ability to save Web pages as PDFs, a download manager that provides access to downloaded files, easily Web page sharing via email or social networks, and tabbed browsing. The Start Page, composed of thumbnail images of frequently visited websites, is particularly helpful for navigating the Web.

Firefox for Android requires Android 2.2 (Froyo) or above.