When Google's floating cultural exhibit opens to the public, you probably won't see many Apple devices on board. Take a closer look at what we've learned so far.
Thomas Claburn
Editor at Large, Enterprise Mobility
November 11, 2013 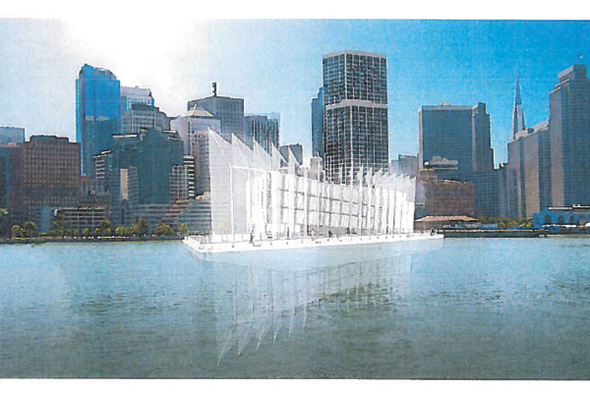 Google's mysterious barge project has been revealed to be a floating technology showroom. (So much for the wild party theories.)

"Although it's still early days and things may change, we're exploring using the barge as an interactive space where people can learn about new technology," Google said in a statement.

Confirming a report published a week ago by San Francisco TV station KPIX, the San Francisco Chronicle on Thursday said documents obtained from the Port of San Francisco through a FOIA request describe the project as a "studio" and a "temporary technology exhibit space."

The Port of San Francisco provided these documents to InformationWeek, offering a more complete picture of a project that Google itself acknowledges may change.

"Temporary" appears to be the key word here because a fixed floating facility would require special approval of the San Francisco Bay Conservation and Development Commission (BCDC), which has indicated that a permanent moored commercial structure isn't permissible under current law. Permanent changes to the bay, known as landfill or fill, are restricted under the McAteer-Petris Act.

Email messages between Diane Oshima, assistant deputy director of waterfront planning for the Port of San Francisco, and attorneys at Perkins Coie indicate that Google has been negotiating for maritime berthing rather than permanent mooring to avoid fill regulations.

"...BCDC regulates barges like fill if left in place for extended periods, rather than treating [them] as [subject to] maritime berthing [rules]," one email says.

Consequently, Google's barge-borne technology showroom will move periodically to different locations. The correspondence between the negotiating parties suggests Google will be able to keep its vessel docked in San Francisco Bay for 53 days during a given year. Another document indicates that the barge will not remain moored at any one pier more than a month.

Google calls its showroom "The By and Large Studio." By and Large LLC is the company applying for the berthing permit for its barge. It appears to be a Google shell company: Documents filed with the Port of San Francisco indicate that its president is James Marocco, finance director at Google; that its secretary is Kenneth Yi, securities and corporate governance counsel at Google; and that the sole member is Google Inc.

The By and Large proposal describes the structure in cultural terms rather than as a project designed to benefit a specific commercial company. "The By and Large Studio will be a new, unique addition to the San Francisco waterfront," the August 2013 Information Packet says. "The artistic structure combines innovative architecture with a bit of nautical whimsy -- creating a surprising environment that inspires conversation, community and 'aha' moments."

When Google's floating cultural exhibit opens to the public, it will be interesting to see which brands and technology platforms are featured. Chances are you won't see many Apple devices amid the nautical whimsy. Take a closer look at what we've learned so far.