Microsoft's slick new Windows 8 Surface tablet looks great, though pricing remains a question. Get up close with 10 of its most compelling features.
Jeff Bertolucci
Contributor
June 21, 2012 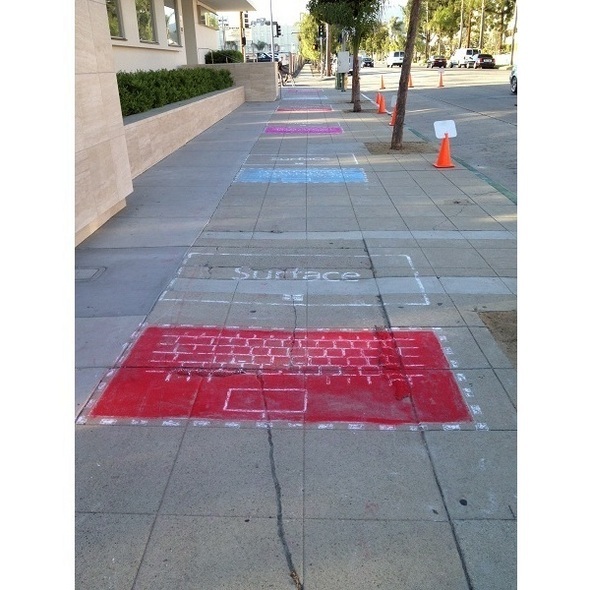 Microsoft's initial player in the the tablet game appears promising, even if key questions about the product remain unanswered. Unveiled at a June 18th news conference in Los Angeles, the duo of new Windows 8-based "Surface" tablets target consumers as well as enterprise and power users. Chalk drawings of the mystery tablets (shown above) greeted the crowd outside the Microsoft event.

Sounds vague? Well, Surface's pricing is just as hazy. Surface for Windows RT will be available with either 32 GB or 64 GB of flash storage and will be priced "like comparable tablets" that use Nvidia's ARM processor, said Steven Sinofsky, president of Microsoft's Windows and Windows Live division. Surface for Windows 8 Professional will come in 64 GB and 128 GB models, feature an Intel Core i5 CPU, and be priced comparably with "competitive Ultrabook-class PCs." Microsoft will provide more pricing and packaging details as the Surface's shipping dates draw near.

The Surface tablets will have Wi-Fi, of course, but Microsoft has made no mention of cellular connectivity--an essential feature for the Pro model to succeed in the enterprise. Given the seemingly rushed nature of Microsoft's announcement--perhaps the intention was to steal thunder from Google's Android-based tablet rumored to arrive shortly--it's possible that negotiations with cellular carriers are ongoing.

Another question is how Microsoft will differentiate its tablets. As Forrester analyst Sarah Rotman Epps pointed out in a recent blog post, Microsoft must be careful not to befuddle its customers:

"Selling x86-based tablets in the same retail channels as Windows RT tablets will confuse consumers and sow discontent if consumers buy x86 and think they're getting something like the iPad. Microsoft and its partners need to articulate a compelling strategy for how they will manage consumer expectations in the channel. Consumers aren't used to thinking about chipsets."

There's a lot to like about the Surface, and we've assembled a visual presentation of the tablet's 10 most compelling features. Dig in for a closer look.