50%
Tweet
New iPhones and the final version of iOS 7 should star in Apple's event on Tuesday. Here's what Apple will save for later. 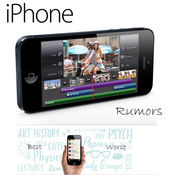 8 iPhone 5 Rumors: Best And Worst
(click image for larger view)
Apple is prepared to reveal two new iPhones at an event to be held on its campus Tuesday. The event is widely expected to be the debut of the iPhone 5S and the iPhone 5C. Apple's mobile operating system iOS 7, previewed earlier this year, will also show its final face during the event.

The iPhone 5S will be a modest refresh of the iPhone 5. Anticipated new features include an improved camera and a fingerprint scanner. In contrast, the iPhone 5C is expected to trade the 5S's metallic frame for a less costly and more colorful plastic shell. Both will share 4-inch Retina displays and most other features. Intended to fill the low-cost gap in Apple's smartphone lineup, the iPhone 5C may have a lower-quality camera than the iPhone 5S. iOS 7 has been in beta testing since June, with Apple providing regular updates every few weeks throughout the summer. Apple typically releases new OS versions in the days preceding the arrival of new iPhones.

These are things Apple will announce with near 100% certainty. But what about other new products? Will Apple surprise everyone and launch its entire lineup for the rest of the year, or will it hold back and save some products for later? Here's what Apple watchers should not expect from Tuesday's event.

People like smartphones with big screens, but Apple isn't ready to jump into the phablet market yet. Sales of devices such as the Samsung Galaxy Note 2, which has a 5.5-inch screen, number in the tens of millions of units. They are no doubt popular. Apple CEO Tim Cook has said several times this year that the company is not interested in introducing a product that compromises usability. Apple contends that smartphones with large screens are harder to use. Last week, The Wall Street Journal reported that Apple is testing iPhones with larger screens, but such a large-screen iPhone is not a product we'll see this year. The iPhone 5S and 5C will have the same 4-inch screen as last year's iPhone 5.

Apple continues to refer to its Apple TV product as a "hobby." The company said this year that it will continue to invest in this hobby, but don't expect a refreshed Apple TV device to show up at this week's event. According to knowledgeable sources cited by AllThingsD, Apple will update the Apple TV's software with new functionality, but not the hardware itself. Some of the new features might include iTunes Radio, which is part of iOS 7, and easy iPhone-to-AppleTV sharing via Apple's Airplay technology.

Apple is definitely working on new iPads. In addition to a refreshed iPad Mini, with or without a Retina screen, Apple is prepping a major overhaul of its full-size tablet to make it slimmer and thinner and thus easier to use. Apple is not going to reveal its new iPads this week, however. This has been "confirmed" by The Loop's Jim Dalrymple. The iPads are on track for a separate debut later this year, likely in October, according to Daring Fireball's Jon Gruber.

Apple's iWatch smartwatch will not appear at tomorrow's event. Reports about the iWatch appeared in earnest in January of this year. At the time, those reports noted the device would probably debut before the end of the year. Subsequent reports, however, suggest that the iWatch won't arrive until early 2014. The bottom line here is that the iWatch is not ready. Samsung's Galaxy Gear smartwatch, announced last week, will arrive months ahead of Apple's wearable product.

Apple updated its iMac line of desktop computers in late 2012. The company may refresh them with new processors or other options, but the company will not release wholly redesigned machines this week. Similarly, Apple updated its laptop lineup earlier this summer with refreshed MacBooks Pros and MacBook Airs. They won't be updated this week, either. It is much too soon for Apple to announce new computers.

Apple's Tuesday event will be all about the iPhone and iOS 7.

Apple wasn't first with the digital music player, or the smartphone, or the tablet, either. Better to get it right
Reply  |  Post Message  |  Messages List  |  Start a Board

I don't think Apple will go with a touch-based iOS notebook. Touch on a notebook is just odd. At least that's been my experience with the Chromebook Pixel. I hope Apple buys Leap and integrates a gesture interface. It would be a better experience that touching the screen of one's notebook.
Reply  |  Post Message  |  Messages List  |  Start a Board

There's a rumor floating around about Apple creating a new power adapter for a new product. It evidently takes a bit more energy than an iPad but not as much as a MacBook Air-- so probably an ARM-based device.

Could it be an iOS notebook to pour rain on the Surface RT? Perhaps not, but there haven't been any "one more thing" surprises in the Tim Cook era-- so maybe they'll surprise us with something on Tuesday.
Reply  |  Post Message  |  Messages List  |  Start a Board