BlackBerry's next Android device is no BlackBerry, it's a re-badged as the Alcatel Idol 4.

Based on the images and specs spotted by CrackBerry, the DTEK50 is a slab-style smartphone with a 5.2-inch, full HD screen, and no physical keyboard. The phone is powered by an octa-core Snapdragon 617 processor with 3GB of RAM and 16GB of storage. Other features include a 13-megapixel main camera, 8-megapixel selfie camera, 2,610 mAh battery with Quick Charge 2.0, and support for memory cards up to 2TB.

These specs match those of the Alcatel Idol 4, announced back in February. More to the point, photos of the DTEK50 show a metal frame, stereo speakers, and a distinct round button on the side -- all hallmark physical features of the Idol 4. The only visible difference between the two is the rear panel, which has a dimpled texture and BlackBerry's iconic logo. 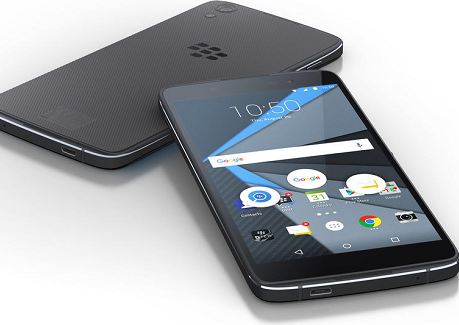 BlackBerry noted that the DTEK50 ships with Android 6.0 Marshmallow, BlackBerry Hub, Password Keeper, DTEK, BBM, and other BlackBerry apps. BlackBerry pulled the listing before too long, leaving a host of unanswered questions in its wake.

For instance, why would BlackBerry use Alcatel to ODM the device rather than design and manufacture the phone itself? Does BlackBerry not have the resources or talent to design hardware anymore? What does this portend for the future of BlackBerry's hardware business as a whole? Is BlackBerry done making its own phones?

[See Beyond BlackBerry: Outdated Tech the Feds Should Dump.]

Obviously, it is less costly for BlackBerry to rely on an ODM hardware partner to design and manufacture its smartphones. BlackBerry is focusing more on its software than its hardware anyway. A shift away from in-house hardware makes sense. Further, BlackBerry CEO John S. Chen has spent the majority of his tenure slicing and dicing costs, with the hardware team facing the deepest cuts.

Alcatel's role here is even more surprising. The Idol 4 is one of Alcatel's two flagship devices for 2016. In fact, Cricket Wireless plans to sell the Idol 4 later this year. Alcatel is working hard to improve its image around the world, so it's curious to see the company strip the brand name off its most important phone of the year.

Eric is a freelance writer for InformationWeek specializing in mobile technologies. View Full Bio
We welcome your comments on this topic on our social media channels, or [contact us directly] with questions about the site.
Comment  |
Email This  |
Print  |
RSS
More Insights
Webcasts
ROI and Beyond for the Cloud
5 Steps to Solving Modern Scalability Problems
More Webcasts
White Papers
From MFA to Zero Trust
Threat Intelligence Solutions: A SANS Review of Anomali ThreatStream
More White Papers
Reports
2020: Threats in Review
The Drive for Shift-Left Performance Testing
More Reports