50%
Tweet
New Apple patent won't stop people from texting while walking, but it could help prevent some distraction-related injuries.

Admit it -- at one point or another you've snickered at some poor schmuck taking a pratfall while trying to text and walk at the same time. Unfortunately, texting-while-walking can do more than bruise the ego: It can lead to real injury, property loss, and even death.

Smartphones are the king of all distractions, and people continue to use them no matter what else they might be doing. A new idea from Apple, however, could help prevent injuries and other mishaps for serial smartphone multitaskers.

Apple filed a patent with the US Patent and Trademark Office for something called "transparent texting." First spotted by AppleInsider, the idea is quite simple. The patent reads:

[Texting behind the wheel is dangerous, but so is talking. Read Texting Vs. Talking While Driving: Debate Continues.]

In other words, the iPhone could be set to turn on the camera and provide a live video feed to the screen. The texting or messaging application would then overlay the live video feed, allowing users to see where they're going while continuing to send and read messages. Ideally, people texting while walking would notice a lamp post, garbage pail, or fire hydrant before stumbling into it.

"When texting, you're not as in control with the complex actions of walking," said Dr. Dietrich Jehle, a professor of emergency medicine at the University of Buffalo in New York, in a statement last month. "While talking on the phone is a distraction, texting is much more dangerous because you can't see the path in front of you." Jehle believes about 10% of the tens of thousands of pedestrian ER visits are caused by cellphones. 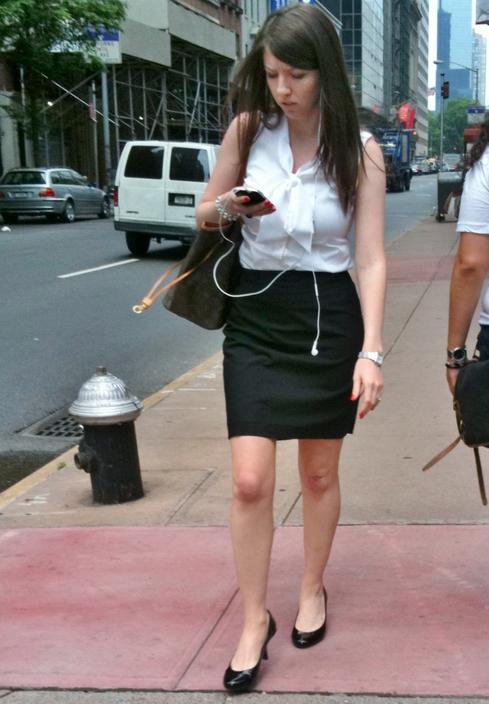 According to an Ohio State University study, the number of ER visits by pedestrians related to cellphones jumped 300% between 2004 and 2010, with those most in danger of injury aged 16 to 25.

Apple, which regularly files patents that have yet to appear in real-world products, first filed the patent in 2012, and so far there's no indication that it plans to add the feature to the iOS operating system or iMessage texting application. It would be interesting to see the idea applied to email, browsers, calendars, or other apps that require users to stare at the screen.

While transparent texting could help prevent some accidents, it won't solve the larger problem of just how distracting smartphones have become. People use them when walking down the street, eating dinner, driving, sitting on airplanes, in the loo, and everywhere in between. Transparent texting might help avert a symptom, but it ignores the sickness.

I'm sorry but there are some things technology just cannot fix.  Stupid is one of those things.
Reply  |  Post Message  |  Messages List  |  Start a Board

Just put your phone down. Whatever it is, I'm sure it can wait. I see SO many people who are glued to their devices ALL the time -- if you fall victim to a pickpocketer, as Lorna mentioned, or trip because you're not paying attention, you have no one but yourself to blame.
Reply  |  Post Message  |  Messages List  |  Start a Board

The young woman in that photo risks having her bag snatched at best, being assaulted at worst, if there are not people nearby. I fail to understand how anyone thinks it's a good idea to be totally oblivious to one's surroundings in public. Earphones are bad enough, but at least your eyes and most of your brain are engaged if you're just listening to music.

If I saw my daughter doing this, we'd have a serious conversation.
Reply  |  Post Message  |  Messages List  |  Start a Board
Editors' Choice
Hot Topics

Northwestern Mutual CIO: Riding Out the Pandemic Jessica Davis, Senior Editor, Enterprise Apps,  10/7/2020
White Papers
DevOps for the Database
SD-WAN or MPLS: Is it Time to Replace Your MPLS?
The ROI Of SD-WAN: Not Just A Numbers Game
Guide To Microsoft Security
Guide to Online Security During Unstable Times