Can Pinterest avoid the missteps of other social networks that courted developers?

Pinterest on Monday began offering developers the opportunity to access a beta version of the Pinterest Developers Platform, a set of APIs for building apps that integrate the data from the social network's Pins.

"Pins" are what Pinterest calls the collections of content that the social network's users have posted online.

The company says that its platform will allow developers to access the Pinterest interest graph, a data set that includes more than 50 billion projects, places, and products. It anticipates that developers will create apps that make Pins actionable -- meaning Pinterest hopes to encourage ecommerce transactions through developers' apps.

"As a developer, you'll have the chance to build something that makes those Pins a reality, like apps for ordering ingredients from a recipe Pin or booking trips based on travel Pins," explained Josh Inkenbrandt, a product manager at Pinterest, in a blog post.

Lots of companies are having to decide whether to let developers create apps for their platforms -- whether it's a social media platform, or a car company's in-vehicle software system. Companies realize they don't have the money, creativity, or connections to write all the apps customers might want.

"The goal is to strengthen verticals we couldn't on our own," spokesperson Malorie Lucich said in an email. 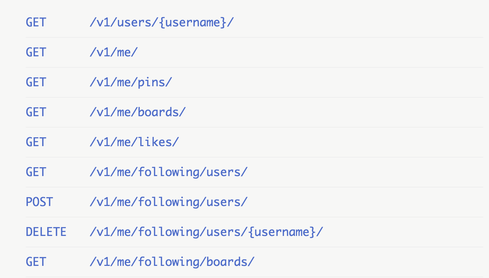 Other social networks have implemented APIs, but two of the most prominent have had difficulty keeping developers happy. Twitter for several years has been trying to improve relations with developers after alienating them in 2012 with platform restrictions. Facebook's focus on large partners like Zynga several years ago and rapid changes to its APIs prompted enough dissatisfaction that the company last year at its F8 developer conference promised to prioritize infrastructure stability over its old motto, "move fast and break things."

Social networks offering APIs may benefit from the efforts of external developers, but they also run the risk of creating competition for themselves. Third-party developers have the opportunity to come up with a better way to present or organize Pinterest data. If they attract enough users for their app, they may find themselves in the position to become gatekeepers to the network or to deprive the social network of a potential revenue stream.

While Pinterest has not issued an API stability guarantee, Lucich said the company has the benefit of learning from others and is committed to building its platform with the help of the developer community.

"We'll be communicating with developers through the developer site on a regular basis, and since the community will be small to start, we'll communicate in more intimate ways (including meetups, listservs, Stack Overflow, etc.) to develop the beginnings of the platform in a way that benefits everyone," said Lucich.

Pinterest is taking a cautious approach when it comes to giving developers access to the site's users. It is requiring that users opt-in to apps that attempt to access their data. Apps must be granted permission to access a user's public Pins and boards, and they cannot access information such as gender, location, and friends' lists, explained Lucich.

Pinterest is only accepting beta applications from US-based developers at the moment. The company says it will grant access to beta program participants over the next few months.

Thomas Claburn has been writing about business and technology since 1996, for publications such as New Architect, PC Computing, InformationWeek, Salon, Wired, and Ziff Davis Smart Business. Before that, he worked in film and television, having earned a not particularly useful ... View Full Bio
We welcome your comments on this topic on our social media channels, or [contact us directly] with questions about the site.
Comment  |
Email This  |
Print  |
RSS
More Insights
Webcasts
The Experts Guide to Ransomware Response
Multi-Cloud Data Management for Modern Applications
More Webcasts
White Papers
New Cybersecurity Paradigm
Improve your business with a Virtual CISO
More White Papers
Reports
A Decade of Passive DNS
2021 Application Security Statistics Report Vol.1
More Reports