How do the new iPhones stack up against some of today's leading devices? We examine displays, processors, cameras, and more.

Apple debuted the iPhone 6 and iPhone 6 Plus on Wednesday, largely fulfilling Apple lovers' dreams with larger screens, improved design, and a wider set of features. The phones are thin metal-and-glass slabs that pack an incredible amount of technology. Some might argue, though, that Apple isn't treading new ground and is in fact merely playing catchup with its competitors. How do the new iPhones stack up against some of today's leading devices?

Processor: Both iPhones share the brand new Apple A8 processor. The chip uses a 64-bit architecture and includes the M8 Motion Coprocessor to handle the sensors. Apple typically doesn't share clock speeds or the number of cores contained within its processors. Without benchmarks, it's hard to say just how good this new processor is. 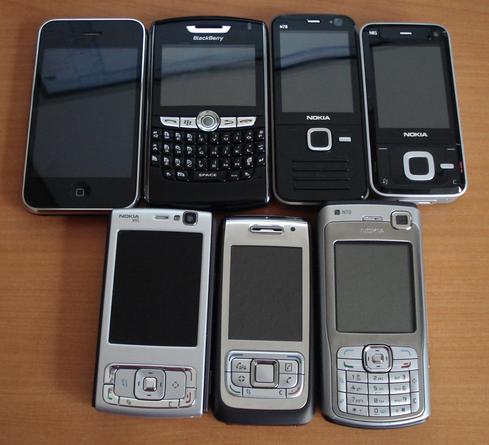 Most competing devices use the same Snapdragon 801 processor from Qualcomm. This four-core beast clocks in at 2.3 GHz to 2.7 GHz per core and is often paired with 2 GB of RAM. Phones with the 801 include the Galaxy S5 and Note 4 from Samsung, the One (M8) from HTC, and the G3 from LG. By the time the end of the year rolls around, however, devices will be shipping with the Snapdragon 805, which is a massive update in many respects.

[And how does the Apple Watch measure up? Read Apple Watch: Useless Beauty, Brilliant Engineering]

Camera: The iPhone 6 and 6 Plus include 8-megapixel cameras. According to Apple, the lens boasts five elements and includes a hybrid IR sensor. It has a True Tone flash, back-side illumination, image stabilization, HDR, face detection, burst mode, and panorama. The aperture rates f/2.2. The iPhones can record video in 1,080p HD, but not 4K or Ultra HD.

Most competing devices meet or beat the iPhones in the camera department -- at least as far as specs and features are concerned. (Actual performance is another issue altogether.) For example, the Galaxy S5 and Note 4 both have 16-megapixel cameras that include the ability to use the front and back cameras at the same time. The Sony Xperia Z3 has a 20.7-megapixel camera, as does the Nokia Lumia 1520. Both of these phones offer a wide array of compelling camera features and tools. Some of these devices can capture 4K video.

In other words, Apple has caught up in some respects. The proof will be in the pudding once real-world camera samples begin to surface.

Connectivity: All smartphones support WiFi, Bluetooth, and GPS, with most supporting the latest versions of these technologies. The same is mostly true of LTE. The iPhone 6 and 6 Plus support 20 different LTE bands, making it compatible with a huge percentage of LTE networks around the world. The iPhones include some advanced features, such as Carrier Aggregation and VoLTE -- but so does the competition. In fact, WiFi Calling, which was added to the 6 and 6 Plus, has been available to T-Mobile smartphones for nearly a decade.

Then there's NFC. Apple is the very last smartphone maker to adopt this short-range radio technology. It's used for pairing devices to one another or, more importantly, for mobile payments. Others have offered it for years. Again, here's Apple playing catchup.

Design: Beauty may be in the eye of the beholder, but Apple's devices do offer a high-class experience. They are made from glass, aluminum, and steel -- and have been since the iPhone 4 debuted in 2010. Apple typically uses top-notch materials, and its manufacturing quality is among the best available. HTC has done a good job defining its own style with metal and glass materials, as well. Most competing models are made from some sort of plastic or polycarbonate. Samsung for the first time added a metal frame to the Note 4 this year, though the back panel is still plastic. LG's flagship still relies on plastics for its outer shell, as do pretty much all of Nokia's Lumia devices. Sony's new Z3 compares favorably to the iPhones, as it, too, uses metals and glass. Materials and design are subjective, no doubt, but you can't ignore quality when you see it. This is one area where Apple meets or beats the competition.

Apple did a bangup job with the new iPhones. They answer many of the shortcomings of previous models. Though the leap forward for Apple is a welcome one, the iPhone 6 and 6 Plus don't necessarily put it way out in the lead in terms of features and technology.

Do you need a deeper leadership bench? Send your most promising leaders to our InformationWeek Leadership Summit Tuesday, Sept. 30, in New York City for a day of peer learning and strategic speakers.