Research overseen by the National Toxicology Program found a slightly elevated risk of cancer in male rats exposed to CDMA and GSM signals from cellphones.

Male rats exposed to radio-frequency radiation (RFR) emitted by mobile phones show low incidences of cancer in their hearts and brains, according to a peer-reviewed, multi-year study conducted by the US National Toxicology Program. The rats in the study were exposed to RFR during gestation and throughout their lives.

Female rats, subjected to the same conditions, did not show a statistically significant effect.

The findings are likely to revive debate about whether mobile phones raise the risk of cancer in humans.

The NTP study subjected more than 2,500 mice and rats to 900 MHz GSM- or CDMA-modulated RFR over the course their lives for almost two years. Exposure occurred in 10-minute-on, 10-minute-off cycles for 18 hours every day.

The study also found a 1.1% to 6.6% increase in heart tumors (Schwannomas) among six rat groups of 90, compared to a 90-rat control group, a more meaningful statistical deviation.

"These findings appear to support the International Agency for Research on Cancer (IARC) conclusions regarding the possible carcinogenic potential of RFR," the study says. 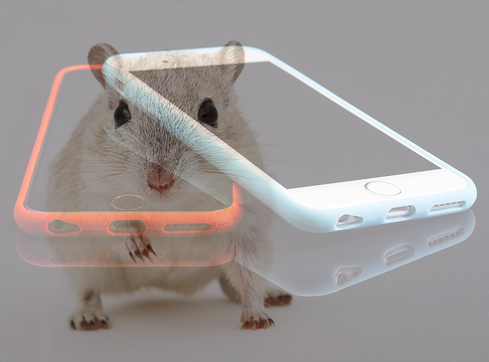 The Working Group defined "limited" by noting that, while the evidence suggested a causal link between certain types of brain cancer and cell phone use, "chance, bias or confounding could not be ruled out with reasonable confidence."

The NTP study noted that the results are limited to the health effects of RFR on heart and brain tissue. The NTP expects to publish further findings on RFR later this year and next, some of research covering the mice studied.

Mice and rats are widely used as models to study human health issues, but they may respond differently to drugs and medical tests. Evidence of RFR's effects on rats is suggestive but not conclusive.

Ionizing radiation, emitted by medical x-ray machines and by elements such as radon in the natural environment, is known to raise the risk of cancer in high doses. People are exposed to low doses of ionizing radiation daily.

RFR is non-ionizing electromagnetic radiation, meaning it lacks sufficient energy to remove electrons from atoms. A 2015 European Commission study found little evidence of harmful effects from RFR exposure. In 2014, researchers from the Manchester Institute of Biotechnology concluded that the weak magnetic fields from mobile phones and power lines do not harm human health.

Given the limitations of the studies to date, more research is certain to follow. But if a causal link between RFR and negative health effects is ever adequately established among scientists, is there a road back from where we are now?

Thomas Claburn has been writing about business and technology since 1996, for publications such as New Architect, PC Computing, InformationWeek, Salon, Wired, and Ziff Davis Smart Business. Before that, he worked in film and television, having earned a not particularly useful ... View Full Bio
We welcome your comments on this topic on our social media channels, or [contact us directly] with questions about the site.
Comment  |
Email This  |
Print  |
RSS
More Insights
Webcasts
How Elite Analyst Teams are Transforming Security with Cyber Reconnaissance
Making Cybersecurity Work in Small and Medium-Sized Businesses
More Webcasts
White Papers
From MFA to Zero Trust
The State of Threat Detection and Response
More White Papers
Reports
2020: Threats in Review
DNS Network Traffic Volumes During the 2020 Pandemic
More Reports

This is certainly a topic that makes everyone think. Especially given the events that have taken place since this thread started. So, you are welcome. I wish we were able to start a trend where everyone takes a step back and thinks about things ethically. The temperature is very high right now in this country and not because it is summer.

I never knew that medical experimentation was done in US prisons for decades as you had mentioned. One can see why inmates would jump if their death sentences were commuted, or if they were not under sentence of death, paid. I'm not sure I would be happy if someone under sentence of death is commuted because they volunteered for medical experiments. It doesn't seem right no matter what kind of experimentation is carried out.

But with regard to the case of supporting the death penalty and not supporting medical experimentation, like i said this has been ingrained in human society since Day One. It is sanctioned and specified in every holy text I can think of at the present and has been part of the law of every major country since the founding of nations. It is only recently that nations have begun to abolish the death penalty. Medical experimentation like i said conjures up images of Nazi's because they were done on innocent people by deranged @#$#%##. So when it comes to the death penalty, i think people view it as a penalty to be carried out humanely and quickly in a solemn session as opposed to the circus atmosphere of bloodlust that existed in Roman times all the way up to the 19th century when most executions became less barbaric and no longer public.

Personally i cannot equate the two. They are two separate issues. And with terminally ill patients, I can see them opting to try the new medications or procedures because it could save them or reduce their suffering, they are innocent people and they have their civil liberties. Condemned prisoners are not in this category.
Reply  |  Post Message  |  Messages List  |  Start a Board

In that case, I don't see any difference why people can support killing the prison in the "accepted" ways, and using that same prisoner for new drug testing and experimental treatments aimed to cure illnesses such as cancer.

Medical experimentation on prisons took place in the US for decades. Prisoners were either paid for volunteering, or even released from the death sentence. It was in the mid-seventies that they stopped openly using inmates for medical research.

From an ethical perspective, it is the same case you can see in hospitals with some terminal patients who choose to volunteer for experimental medical treatments for their condition. If it works, they live; if inot, they are going to die anyway. But it's a step ahead in getting to the right treatment to work on future patients.

This is probably the best i can make of it, from a historic perspective. From an ethical perspective I cannot really comment on it with any background.
Reply  |  Post Message  |  Messages List  |  Start a Board

@hho: I used to hold my phone away from my head and talk on speakerphone when possible so as to avoid the possibility of a brain tumor.  Now I do that because it's easier and I have trouble hearing the other person when not on speakerphone.  Either the phone is getting old or I am.
Reply  |  Post Message  |  Messages List  |  Start a Board

anyway, just put the phone away from the brain, you'll be fine. If that's in-convenience, then let it be.

There is no 1 size fits all. There are always negative & positive(matter & anti-matter).
Reply  |  Post Message  |  Messages List  |  Start a Board

Whoopty, the Third Reich type of scenario you mentioned was very different from what I am saying. tgj... mentioned below also that even with their consent there could be legal or social issues.

Then, do you agree with the death penalty, but think that using prisoners who are already sentenced to death to test new drugs that could, for example, advance treatments or even cure cancer and other illnesses is not ethical?

In your opinion, why would you say the death penalty is morally accepted, but, on the other hand, using murderers, serial killers, etc. for lab testing to save good people's lives would send society down to the times of Hitler? Again, I don't believe it's the right comparison, if you allow me to say.

Where do you see the logic?