Tablet shipments declined during the first quarter, but a curious change is occurring. Interest in detachable tablets like Microsoft Surface is increasing, while interest in traditional slates decreases.

Hardware makers shipped 39.6 million tablets during the first quarter, which is a significant drop of 14.7% compared to the year-ago period. Slates like the Apple iPad accounted for the lion's share of tablet shipments, but the number of detachables -- devices that include a detachable keyboard -- grew significantly.

It's this growth that IDC says should worry traditional PC makers.

Apple, Amazon, Lenovo, and others pushed 34.7 million slates out the door during the first three months of the year, giving slates 87.6% of the entire tablet market, according to the latest numbers from IDC. Detachables saw triple-digit year-over-year growth, rising to 4.9 million units, or 12.4% of the market.

While Microsoft should be credited for kicking off the detachable form factor with its Surface line of devices, traditional phone makers, such as Samsung and Huawei, are jumping on the bandwagon. Both companies introduced hard-hitting tablets this quarter that target enterprise workers, and offer Windows and removable keyboards. 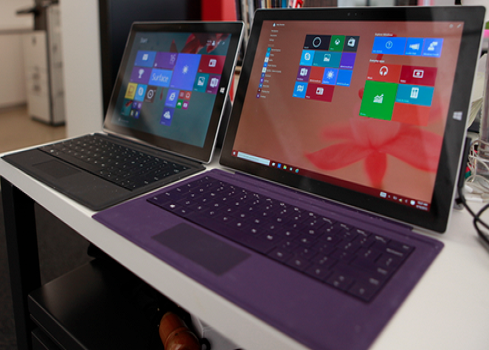 The only thing holding these particular devices back, says IDC, is their pricing.

"The introduction of detachables from traditional smartphone vendors is only beginning, and poses a real threat to traditional PC manufacturers," Jean Philippe Bouchard, research director for tablets at IDC, wrote in the report. "Their understanding of the mobile ecosystem and the volume achieved on their smartphone product lines will allow them to aggressively compete for this new computing segment."

It's no surprise to learn that Apple continues to dominate the tablet market with its line of iPads. The 12.9-inch and 9.7-inch iPad Pros are particularly appealing to business users, thanks to their stylus support, impressive performance, and optional keyboards.

Still, these new models didn't help Apple stem the decrease in shipments. The company shipped 10.2 million iPads during the first quarter of the year, compared with 16.1 million in the holiday quarter and 12.6 million in the year-ago period.

It's entirely possible that we've reached peak iPad, and Apple's sales moving forward will mostly come from people replacing older tablets rather than new customers adopting them for the first time.

Samsung's Galaxy Tab lineup of Android slates sells well enough and are among the few lines of high-end Android tablets. The TabPro S from Samsung is an excellent piece of hardware, but isn't selling well just yet. Amazon's Fire tablets are incredibly popular due to their low price points.

"Apple's recent foray into this segment has garnered them an impressive lead in the short term, although continued long-term success may prove challenging as a higher entry price point staves off consumers and iOS has yet to prove its enterprise-readiness, leaving plenty of room for Microsoft and their hardware partners to reestablish themselves."

Speaking of Microsoft, its Surface tablets failed to help it break into the top five on a global scale. The Surface Pro 4 and Surface Book, introduced last fall, are compelling machines, but they cost a pretty penny. In the long run, IDC sees Windows pulling ahead of iOS and Android in total tablet shipments. That shift has just barely begun to take shape.

Eric is a freelance writer for InformationWeek specializing in mobile technologies. View Full Bio
We welcome your comments on this topic on our social media channels, or [contact us directly] with questions about the site.
Comment  |
Email This  |
Print  |
RSS
More Insights
Webcasts
What We Can Learn from Sports Analytics
Protecting Your Enterprise's Intellectual Property
More Webcasts
White Papers
Two-Factor Evaluation Guide
The Insider's Guide to IP Geolocation Data During COVID-19
More White Papers
Reports
The State of Cloud Computing - Fall 2020
The ROI Of SD-WAN: Not Just A Numbers Game
More Reports

I bought a tablet without the detachable keyboard and found many of my favorite programs were difficult to impossible to use, so I bought the keyboard which also protects the screen and am pleased with my purchase. It has a Core M processor, full HD screen, pressure sensitive pen, 4GB of memory, 64GB of fast storage and 64GB of micro card strorage,USB C connector and HDMI, runs Windows 10 all in a nice 10.6 inch formfactor. Portable, but useful.
Reply  |  Post Message  |  Messages List  |  Start a Board
Editors' Choice
Hot Topics