Lawsuit Raises Questions About The Right To Tinker With Tech - InformationWeek

The Electronic Frontier Foundation has filed a lawsuit to overturn a provision in the Digital Millennium Copyright Act which limits the modification of technology. For anyone managing information technology, the law in question has the potential to limit access to data, to weaken security, and to impose unnecessary burdens, costs, and liabilities.

The Electronic Frontier Foundation (EFF) filed suit against the US government on July 21 to overturn a provision of the Digital Millennium Copyright Act (DMCA) which forbids bypassing digital locks.

Undoing digital access controls, or technical protection measures (TPMs) -- often referred to as digital restriction management or digital rights management (DRM) -- is unlawful under Section 1201 of the DMCA. Distributing tools that circumvent TPMs is also illegal under the law.

Supporters of Section 1201 insist it's necessary to criminalize the cracking of digital locks to prevent the unlawful copying of digital content, otherwise known as copyright infringement.

While the relevance of Section 1201 to copyright protection remains a matter of dispute, the EFF suit argues the law criminalizes lawful copying, the modification and repair of devices that employ DRM, and security research on protected devices. The law casts a cloud over the public's right to tinker, the organization says.

For anyone managing information technology, Section 1201 has the potential to limit access to data, to weaken security, and to impose unnecessary burdens, costs, and liabilities.

The EFF is suing on behalf of Andrew "bunnie" Huang, who, through his company Alphamax, is developing devices for editing digital video streams. These devices allow people to alter video content by, for example, adding a dynamic Twitter comment field over a presidential debate. Selling such technology could be challenged under Section 1201.

"Section 1201 means that you can be sued or prosecuted for accessing, speaking about, and tinkering with digital media and technologies that you have paid for," Huang wrote in a blog post explaining why he has sued the government. "This violates our First Amendment rights, and I am asking the court to order the federal government to stop enforcing Section 1201." 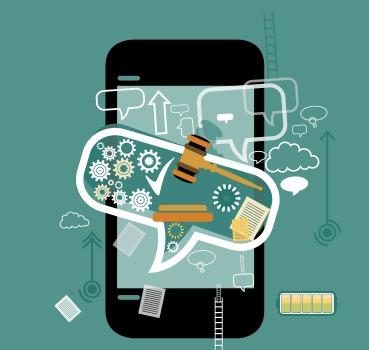 The EFF is also representing Matthew Green, an assistant professor in the computer science department at Johns Hopkins University, who specializes in cryptography and computer security. Green had to seek a DMCA exemption last year to be assured that his security research was lawful.

The government tries to differentiate between unlawful and lawful copyright infringement (fair use) through triennial rulemaking by the Librarian of Congress. The Librarian considers applications for exemptions to the law every three years and grants some of them. Last year, the EFF celebrated the granting of exemptions for activities such as jailbreaking mobile devices to run third-party software.

In its complaint, the EFF argues this process is flawed because it places onerous requirements on applicants, which fall outside the scope of copyright law.

The cyber rights group's complaint also contends exemptions are inconsistent. Previous exemptions have not been renewed for activities such as researching internet block lists, for testing TPMs for malware, and for allowing mobile phone owners to change carriers. The EFF complaint argues the public cannot rely on exemptions as assurance that lawful activities, such as recording a digital movie on a DVR, will remain lawful.

Google's Nest provided a recent example of the potential problem. In late 2014, Nest acquired Revolv, which made an internet of things (IoT) hub. In May, Nest shut down the backend service supporting the Revolv Hub. Ideally, Revolv owners could simply reprogram their devices with different software. But if those devices were protected, then owners would not have a clear legal path for making modifications.

The EFF complaint contends Section 1201 interferes with the First Amendment right to free speech by limiting legitimate efforts to repurpose protected content through activities such as documentary filmmaking, ebooks that excerpt digital content for analysis and criticism, integrating digital content into online courses, content format conversion for those with impairments, and restoration of content such as games that are no longer supported.

"The government cannot broadly ban protected speech and then grant a government official excessive discretion to pick what speech will be permitted, particularly when the rulemaking process is so onerous," said EFF attorney Kit Walsh in a blog post. "If future generations are going to be able to understand and control their own machines, and to participate fully in making rather than simply consuming culture, Section 1201 has to go."

Thomas Claburn has been writing about business and technology since 1996, for publications such as New Architect, PC Computing, InformationWeek, Salon, Wired, and Ziff Davis Smart Business. Before that, he worked in film and television, having earned a not particularly useful ... View Full Bio
We welcome your comments on this topic on our social media channels, or [contact us directly] with questions about the site.
Comment  |
Email This  |
Print  |
RSS
More Insights
Webcasts
What We Can Learn from Sports Analytics
Strategies for Success with Digital Transformation
More Webcasts
White Papers
From MFA to Zero Trust
ROI Study: Economic Validation Report of the Anomali Threat Intelligence Platform
More White Papers
Reports
Assessing Cybersecurity Risk in Todays Enterprises
Special Report: Understanding Your Cyber Attackers
More Reports

I am FAR from a Lessig-worshipping, "copyleft," anti-IP activist.  But in my opinion, the DMCA has really screwed things up and taken them too far, for the reasons here stated in the article.

To me, the kind of modifications we're talking about are no less benign than, say, drilling a hole in a 3.5" floppy to double the density.  And who DIDN'T do that back in the day?
Reply  |  Post Message  |  Messages List  |  Start a Board
Editors' Choice
Hot Topics

10 IT Trends to Watch for in 2021 Cynthia Harvey, Freelance Journalist, InformationWeek,  12/22/2020
White Papers
From MFA to Zero Trust
From MFA to Zero Trust
Presenting Your Cloud Security Strategy to the Board
The Insider's Guide to IP Geolocation Data During COVID-19
Frost Radar: Global Threat Intelligence Platform Market